As a Movie, Ender’s Game Missed The Point

This last weekend, the wife and I watched the movie adaptation of the beloved book by Orson Scott Card, the author who seems to have developed a habit of espousing some not-so-popular opinions over the last few years.

As a pure movie (ignoring the existence of the book), it was pretty good. The special effects were great, Asa Butterfield was convincing as conflicted, complicated young hero Ender, Harrison Ford was chilling as the manipulative leader Graff, Ben Kingsley was effective as the weird guy with a crazy accent and crap tattooed all over his face (which doesn’t do much to differentiate this from his other recent roles). Sometimes, the scenery felt too sterile and plot devices seemed “placed”… characters sit in rooms and talk, or happen to appear somewhere at the exact moment the story calls for them to be there. 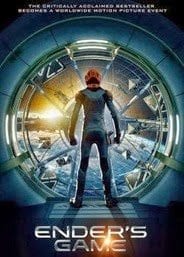 So as a standalone, it’s good. Case in point: my current wife has not read the book, and she loved the movie.

BUT (and spoilers ahead for those who haven’t either read the book or seen the movie. I’ll try to be vague, though.)

As an adaptation, it didn’t work for me.

Science fiction, when effective, is supposed to be metaphorical and satirical (see Vonnegut, Kurt). Ender’s Game the novel is about the strong manipulating the weak, about empathy, about nationalism, and a many other meaningful and thought-provoking topics.

On the surface, it’s about a boy with a terrible burden placed upon him: to become a military leader, because the alien race known as the Formics may come back some day to kill us all.

The book features one of the bestest plot twists of all time. That’s where the movie fails miserably. Ender’s Game Missed The Point.

The disparity between the greatness of the novel and the crappiness of the movie is the use of the ticking clock… in the book, we have no idea that the plot twist is about to happen, because we see the story through Ender’s eyes… so it’s a huge shock when we find out what he’s actually done to the Formics at the end.

In the movie, it’s telegraphed all the way through. I understand that they needed to raise the stakes (because who would care to watch a movie about a boy playing laser tag on a spaceship?) but the fact that they constantly remind us that the end battle with the Formics is coming, it lessens the effect.

In the book, we feel Ender’s betrayal, because we see how empathetic towards the Formics he has become. In the movie, Ender’s betrayal is limited to one argument between Ender and Graff. Totally missed out on the opportunity to explore the statement the book makes about fear and xenophobia.

Maybe I’m being nitpicky, but to me, the ending was the only thing they had to get right, and it could have been bigger than the twist at the end of The Sixth Sense. But it wasn’t, so they blew it.

If you’re considering seeing this movie, don’t. Read the book first. If I haven’t spoiled it for you already. Which I’m not sorry about, because I warned you above. So if you’re reading this sentence and you haven’t read the book or seen the movie yet, then you’re doing it wrong.