One of the largest agricultural producing regions of the United States is under grave danger from water shortages.  According to Mercury News, “The Central Valley, home to the world’s largest swath of ultra-fertile Class 1 soil, is the backbone of California’s $36.9 billion a year, high-tech agricultural industry. Its 6.3 million acres of farmland produce more 350 crops, from fruits and vegetables to nuts and cotton, representing 25 percent of the food on the nation’s table”.  This modern day bread basket of the United States produces a quarter of the food that is eaten in the United States each year, yet because water scarcity has reached new heights, drastically increased food prices can be expected for next year. 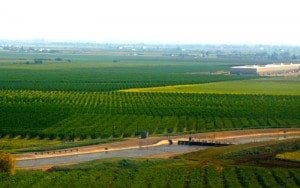 California’s agricultural production is limited by how much water is allocated to the farms.  As Mercury News reported, “The rise of the valley’s agricultural might is intimately tied to its access to the water”.  As a collective these past three years mark the worst draught in 1200 years for the Central Valley of California according to NBC news. Water levels in the Midwest have reached record lows, and the rate that the water is being lost is also the fastest that its been since the University of California began measuring water reserves over a decade ago. This will likely mean shortages of food and rising food prices are within sight.

The sheer scarcity of available water resources has not only created a struggle for farmers that make up California’s agricultural industry, but will likely mean increased food prices all across the United States.  Fracking is also expediting the rate that water resources are exhausted.  The amount of water used for fracking in Colorado is rapidly going up according to The Guardian. “Water demand for fracking in [Colorado] was expected to double to [six billion] gallons by 2015 – or about twice as much as the entire city of Boulder uses in a year”.

As food prices go up and water rights become limited, it would make sense to rally support for local agricultural production.  There is a need to protect our right to a local food supply, as well as the local food supplies’ right to water as resources used for food production become scarce.  This would be a sensible way to boost community resilience against food scarcity.