Home › Blog › Spotlight on Boulder Arts: A Night with Wo Chan

Spotlight on Boulder Arts: A Night with Wo Chan 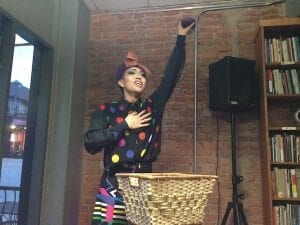 Welcome to AboutBoulder.com’s new artist’s blog where each week I’ll use this space to feature one of the many artists, writers, and/or musicians that are shaking things up around Boulder. From the mountains to the plains, Boulder is a haven of creativity. And it’s not just the greenery and mountains in our backyards that ignite this creative energy alone, but also the coffee shops, bookstore, organizations, and public spaces around town that help amplify creative talents.

It’s no secret that the Boulder arts community is forever indebted to the generosity and support of Brian Buckley and Katherine Hunter, owners of Innisfree Poetry Bookstore and Cafe and champions of Boulder arts. Last Sunday evening, Innisfree opened its doors for A Night with Wo Chan, an event filled with poetry, drag, and live music. The event was hosted by the Student Creative Writing Association (sCWA) at CU.

If you don’t know Wo Chan, I recommend you do. Wo is a queer Fujianese immigrant, poet, and drag performer. Wo is the recipient of honors from Poets House, Kundiman, Asian American Writers Workshop, and Lambda Literary, and is published in The Margins, Cortlandt Review, No Tokens, and others. Wo is also a member of the Brooklyn based drag alliance Switch N’ Play, and has performed at various venues, including weddings, municipal Pride festivals, Ivy League institutions, and the Architectural Digest Expo. You can find their digital persona on Facebook or Instagram (@theillustriouspearl).

If you’ve ever been to a live literary reading, you’ve probably experienced moments where perhaps you seriously wondered if the person on stage was holding you hostage. Maybe your eyes even darted for the door more than once plotting an escape. Not with Wo. With Wo the audience is engaged 100% of the time, whether they are reading their poems or performing in drag, and especially when they pull a large string of pearls out of a rotisserie chicken with their teeth. Did I mention the drag performance was in conversation with the Food Network show “Chopped?” Because it was.

The energy that radiates from Wo is indescribable. Their work touches on themes of immigration, family, gender, and bodies, handing difficult subject with wit and grace. You can check out some of their stunning words here.

And, thanks to the sCWA’s planning, between the poetry and drag sets the audience also got a chance to be wooed by the original music of Hillary Susz, an MFA candidate from CU’s Creative Writing program. Hillary describes her music as straight up rock-n-roll, but don’t let her modesty fool you. Her guitar strums were heavenly and her lyrics complex, “I hope you’re like me, double rainbow psychotic.” I couldn’t help but feel like her vocals were reminiscent of the 90s whip-smart era where women dominated the indie rock scene. Hillary is definitely an up-and-coming musician to watch out for. You can listen to her music live this Thursday at the Laughing Goat on Pearl at 8:00PM.

So there you have it. Check back for more news on artists working and performing around Boulder and the amazing things they do.