How I had Fun at a Horror Film Festival

I don’t totally dislike the horror film genre. I just prefer not to be incredibly disturbed and grossed out while watching a movie because, honestly, I’m good at traumatizing myself in real life. Although I’m not afraid of the dark and I prefer to live alone, I’m also kind of a jumpy and paranoid person. I get startled when my light-footed boyfriend comes up behind me just to ask a question and if a friend who drives home late at night forgets to text me upon her safe arrival then I’ll assume the worst—that she died in a car crash.

Since I’m slightly morbid, I do like some genres that could be considered subgenres within horror: in the past I’ve enjoyed watching certain psychological thrillers, crime mysteries, horror comedies, vampire romances (no, not that franchise), and ghost stories. But I hate gory slasher films and I’m often worried that a horror movie will be too violent for my taste. So when my boyfriend, one of my best friends, and her boyfriend started planning to attend The Stanley Film Festival, I was uncertain about joining them. But I eventually decided to go along and I’m surprised to report that I had fun despite my hesitation. 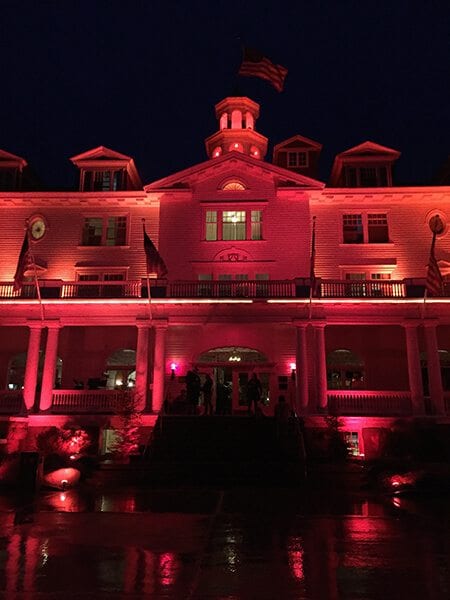 The Stanley Hotel bathed in red light during the festival.

Immersing Myself in Estes Park

I was wrong to be dubious towards the film festival but I was certain from the beginning that I’d love its setting. The fest is held at The Stanley Hotel in picturesque Estes Park. Famous for inspiring Stephen King’s The Shining, the hotel is supposedly haunted but Estes Park is a quaint and welcoming mountain town that’s full of ice cream and candy shops.

I was originally content on merely taking in the stunning views but the festival prompted me to explore the hotel grounds and the town with an immersive game. Part scavenger hunt and part puzzle, the game sent participants around town looking for clues regarding a fake construction company and its shady connection to an ancient Egyptian magician. Throughout the course of the weekend, I spent a fair amount of time guessing how the story would end as the game’s narrative unraveled via planted evidence and theatrical performances. I wasn’t able to put together the story on my own and I’m almost certain that the game fell apart because there were too many people playing it. But I did like how the immersive experience ended up being a great excuse to check out local businesses, like Macdonald Bookshop, as well as roaming around The Stanley at night, which later encouraged me to take the hotel’s guided historic tour.

Not to sound like an obnoxious film festival-goer but I was more invested in the events happening outside of the screenings and panels. Luckily, the festival offers several events that manage to be fun for horror novices and casual fans. I really enjoyed the Dead Right Horror Trivia, where I was a part of a losing team but was able to contribute one brilliantly correct answer for a question about the awesome ‘90s film The Craft (which I remember very accurately). I was also really impressed by the performance from ITCHY-O, a Denver-based gothic marching band that puts on a show I don’t even want to ruin by trying to describe (just go see them live).

While these two events were free and open to the public, the festival threw some exclusive parties too. There are so many genuinely friendly and passionate people who attend the festival that even someone as awkward and shy as myself was able to socialize and make new connections. Also, on a lesser but still important note, the oddly non-Coloradan but rather French beer that was served at every bar was surprisingly drinkable. 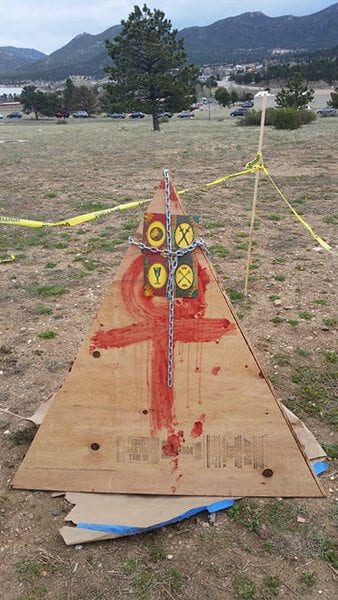 The immersive game got weird.

Gazing at Elijah Wood but Never Speaking to Him

No, I didn’t use liquid courage in order to approach Elijah Wood. In fact I barely drank at the festival probably from the fear of making a drunken fool out of myself, which I’m more anxious about than watching any horror film. Elijah Wood, aka my first celebrity crush whose posters I had on my wall during elementary school and college (teeny bopper magazine pullout and Lord of the Rings, respectively), is a horror film buff and one of the festival’s biggest supporters. He’s also a founding member of SpectreVision, which produced two films screened at the festival this year that I was genuinely sad to miss: Cooties and The Boy. I did however enjoy stealthily glancing over at him every time we were in close proximity of each other, without actually bothering him (I respect him too much to subject him to my fandom).

I Saw Two Movies and Loved One of Them!

Although my group arrived mid-day on Friday and left early Sunday afternoon, we had all of Saturday to utilize our badges by seeing as many films as possible—I ended up seeing two. The first movie I watched was The Nightmare, a documentary that I assumed would be a fascinating analysis on sleep paralysis and the mysteries of the mind that ended being more concerned about how people prefer to believe in supernatural occurrences than seek out psychological or medical explanations. Or maybe it was about horror filmmaking and the sometimes universal but ultimately subjective force behind storytelling. It’s hard to say since the film’s narrative and intent were unclear.

Thankfully, the second film I saw was fantastic. The Invitation is a terrifying thriller by Karyn Kusama, the director of Girlfight, Aeon Flux, and Jennifer’s Body. It’s an intense film that steadily builds suspense without any true relief. Since it will be released in theaters, thanks to Drafthouse Films picking it up for distribution after its SXSW premier, I’ll refrain from divulging any spoilers. Just know that I was a sweaty, shaky mess during most of the movie and that I simultaneously recommend it and also don’t wish for you to have the same experience. A thriller hasn’t impacted me so heavily since David Fincher’s Zodiac, which is a comparison I’m probably making because (OK HERE’S ONE SPOILER BUT WHATEVER IT’S JUST CASTING RELATED) of the appearance of a particular actor.

Ok, fine, I guess I do like certain horror movies even though I often feel like I’ve needlessly upset myself by watching them. Although I have no problem admitting that I enjoy crying over a sad drama and that I believe it’s better to be informed than ignorant about depressing news stories, I don’t generally subject myself to the emotional burden of seeing a horror film. And while I’m unsure if I want to lose myself in a horror story anytime soon, I can at least now recognize and admit that I’m more interested in the genre than I previously assumed. Thanks to The Stanley Film Festival, as well as my boyfriend Dave who helped convince me to go, I had a unique weekend getaway in the mountains. The fest created an inclusive environment that also encouraged me to better define what I like and dislike about the horror genre. I have no doubt that the festival will skyrocket in popularity in a few more years. I’m glad I was able to attend in its third year, before it becomes an essential (and crowded) destination for film critics and enthusiasts.