The Best Study Spots for Finals 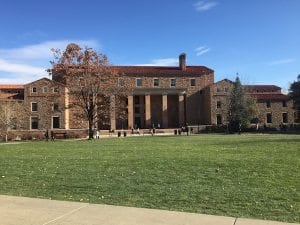 Finals are almost here, we only have two and a half more weeks until the end of the semester. Where did the time go?? These last two weeks are definitely the most stressful time of the semester because professors love to squeeze in a few more assignments to add to the stress of final tests, papers and projects. Especially the professors that think the world revolves around their class… (it doesn’t). The Norlin Library will be getting very crowded because that seems to be the favorite spot to study. However, there are tons of other places you can go to get some peace and quiet while studying!

There are lots of options other than Norlin (though it’s a great study space, just always crowded) to study, so explore what kind of environment will suit you best!

Lily Lemire
Lily is a senior at the University of Colorado at Boulder and will be graduating with a Bachelor of Arts in Film Studies along with a certificate in Business. She is originally from Scarborough, Maine, but decided to venture to Colorado for it's beauty and to get back in touch with her birth place which is Boulder. She is a Film Studies major because she is very interested in the behind the scenes of what goes into making a film. Not only that, but her favourite hobby in the world is to watch movies. She recently went abroad to Sydney, Australia to get a taste of a different culture. While being there, she learned to not take life too seriously, and to slow things down. The Australian lifestyle can really teach a person how to be chill. You can find Lily at the movies, hanging on Pearl Street having a beer with friends, or at the breathtaking lookout of Flagstaff enjoying the view.
See More Articles From Lily Lemire
Tagged: coffeeshopsCUNorlinlibrarypeaceandquietStudying