Home › Blog › Boulder People and Events › The Meaning of Halloweening

The Meaning of Halloweening 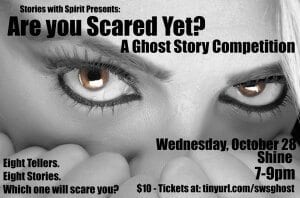 Ghouls, ghosts, goblins, galore! Today marks one of the most fiery of fall festivities, an opportunity for our world to enter into any other of our choosing. It is an art, really; with tools in the forms of costumes, candy, celebrations of all creatures, characters and imaginative creations. For a couple days, Project Runway becomes accessible to every child who ever dreamed to be someone or something else. The entire world is our red carpet, and behold the zombies a-walkin’.

However, it is far too easy to get lost in the perhaps “Americanized,” or “modernized” form of Halloween. What, exactly, is it? Where did it all begin? What is the thrill of horror, of being scared? Leave it to “Shine,” Boulder‘s Restaurant and Gathering Place, to unveil some answers. On October 28th at 7pm, Shine hosted a ghost story competition entitled, “Are You Scared Yet,” where eight tellers performed stories, received scores, and participated in the preservation of Halloween that is not typically seen on the streets. First, there is no place other than Shine to have an event such as this one; the holding space always sets the stage, and Shine is one with every-day elixirs, potions, energy stones and a tasteful yet medieval kind of aesthetic that held hands with Halloween this year. Boulder, home of many spiritual folk, took on a different meaning at this event, where spirits, energies, and shadow sides of all kinds were welcome to tell their tales.

Cooper Braun-Enos and Ann Harding, event hosts and coordinators for “Stories with Spirit,” provided the competition guidelines. Each story was to be eight minutes long, and for each minute over, the teller got docked three points. The criteria entailed three parts: the story’s craft, the chill factor, and the audience response. The winner received a state-of-the-art Raven, resembling the darkness of night and its all-encompassing wonders, as well as a Downtown Boulder gift card. This event attracted an audience that was more engaged than any play, opera or ballet. These were listeners who craved a good story; who understood the craft; who viscerally felt each “oooh” and waited for the next “ahh.” This is the essence of Halloween.

Despite the fact that each of the stories were true (or were they?), there was an overall theme about this experience that is crucial to any art: it is what Alexis Cooley, executive producer of the Boulder Fringe Festival named as the “blurring of lines between the artist and the audience.” The artist speaks as they are also witnessing the event, and the audience receives the story as if they were writing it. The audience held not only listeners, but various esteemed representatives from art practices in Boulder and Boulder County. There was Venita Moore, event judge and board member of Rocky Mountain Storytelling, Emily K. Harrison, Pulitzer Prize winner of the theatre production, “How I Learned to Drive,” Boulder Arts Week Coordinator, and Boulder Story Circle Meetup founder of Louisville, David Ortolano of the International Boulder Fringe Film Festival, Halloween Film Series and opener of Longmont‘s newest Stewart Auditorium and many more. Each audience member had a story, and I was merely a writer cast in the presence of fame, Boulder‘s hottest Halloween celebrities. 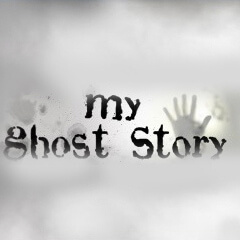 The event encompassed many layers and organizations that co-collaborated to create successful art and outcome. What was expected to be a twelve to fifteen person event, flooded the room with at least forty interested Halloween preservationists, capturing the true spirit of Halloween through story. Spellbinders, a twenty chapter national organization which began in Denver twenty-five years ago, allows volunteers to tell stories in schools once a month in each class. Wynn, a story-teller participant and Spellbinder volunteer, advocates on behalf of his experience. He reports, “There’s no feeling like that of walking into the classroom and getting a hug.” The impact of art through education is immense, and Halloween became the vehicle this year in impacting many.
Boulder does so many things right. It brings back the meaning of things that are easy to forget. It takes every holiday to a micro and macro level. It forces each resident to question why and how everything is what it is. Halloween “there,” wherever “there” is, is not Halloween here. It is bigger. It is spookier. It is more real. Our every day Boulder is not that much different than Boulder‘s Halloween, in that Boulder is home to all things Halloween allows. We are home to the spirit-seekers, the ghost-riders, the psychic mediums and energy-workers. There is less pretending here, on this day; there is only welcoming and embracing what we already know we have.

Alexis Cooley says that “no matter what form of art you do, it tells a story. It reminds us of the moment we became humans, that we became a community.” Having experienced Halloween as a young one in costume, and a college student at raunchy parties, it was more than a breath of fresh air to return to the home of Halloween, where it began with our honoring of ancestral lineage. The truth, the magic is still there. It is in each of us. It is in the stories we tell. It is in the celebration of the preservation of who we are and where we came from. The spook remains in the questioning: is it real? What really happened? In the ominousness of night, we are encouraged to ask the hard questions, and to live in the unknowing. Tonight is not about conforming to what’s “cool,” or being unsafe. It’s about connecting with what we do not know, connecting with ourselves. Channel the question; what comes to you? Who is speaking? What are the voices saying? For that is the true meaning of Halloweening…