The Seven Types of Professors You’ll Have at CU

Whether you’ve just started school at CU or you’ve been around the block a few semesters, by the time you graduate you’ll be sure to have encountered each of these seven types of professors: 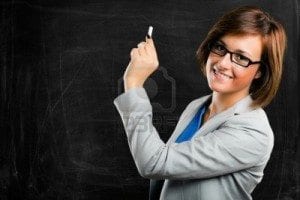 This professor views their classroom as a nightclub, and their students as an audience that just keeps coming back for more. Some are legitimately hilarious and will leave your abs (if only you had abs) aching from laughter, while others will make you want to hide your cringing face behind your textbook. Whether your professor is the academic version of Chris Rock, or a scholarly Carrot Top, just count yourself lucky that they are making an effort to entertain you. Warning: many of these professors will garner a reputation for being entertaining and their classes will fill up early, so try to get in quick during registration!

This professor could be the most brilliant you’ve ever had, or the most vapid, and you probably wouldn’t know the difference. Sometimes their heavy accent will make you want to laugh, and other times it will make you want to cry, like when you realize that you’re completely unprepared for a test that was announced weeks ago. It’s a cruel twist of fate that the most challenging courses in college, such as upper division math and science, tend to be the ones with professors from foreign lands. As if understanding multivariable calculus wasn’t hard enough! A few semesters ago, I took a class with a professor who had just emigrated from China. His accent was so strong that he made Jackie Chan sound like Ronald Reagan, but I stayed after class with him to go over the work and by the end of the semester… ah who am I kidding, I still couldn’t understand a thing.

If you’ve never experienced this type of professor, count yourself very lucky. This professor is so full of his or herself that if it were possible, they would be their OWN teacher’s pet. They constantly remind the class that they are one of the leading figures in their field, and almost exclusively assign readings that they themselves have published. My advice is that when writing papers for this professor’s class, make a point to agree wholeheartedly with every thesis that they’ve published and they will be guaranteed to consider you nothing short of genius.

4. The Overly Enthusiastic One:

This professor simply cannot wait to come to class and teach. He or she loves their respective subject with a passion that borders on psychosis. I had a geology professor a few semesters back who certainly qualified for this category. One could expect at least a half-dozen geology puns per class (Geology class rocks, anyone?) and several shrieks of joy when students exhibited an understanding of the lesson. The uninhibited enthusiasm of these professors actually makes for a fairly entertaining class and can certainly help to relieve boredom in a course that might otherwise put you to sleep. Warning: These professors will often go on extensive, impassioned tangents in which they will tell long, anecdotal stories about their subject, which have absolutely nothing to do with the curriculum.

If you came to college for the sole purpose of an intense intellectual challenge, then register for this professor’s course as soon as you can. If you came to college for any other reason, then stay far, far away.  This professor is brilliant and assumes that all of their students are as well (this is perhaps the one lapse in their brilliance). They assign a profusion of work that no one in the class fully understands, but are all too intimidated to question. Just pray that this professor grades on a curve (and there aren’t any Genius Professor protégés in the class) and maybe you’ll pass. Fortunately, these professors tend to be sensible and will work with you if you ask for their help. Just don’t get mad when you can’t understand their help and feel even dimmer than before.

You might have to fight your fellow students to get a front row seat in this professor’s class. They’re the real reason you have perfect attendance all semester long. This professor is both smart and attractive, a combination seldom observed in nature, so obviously you won’t be able to resist falling in love. Just make sure that you pay attention to what the professor is ACTUALLY saying in class and not what they’re saying in your daydream, and you should do fine.

This professor has seen it all. Those wrinkly, arthritic hands of theirs have been grading papers since the Eisenhower administration, and they’re not about to stop now. Sure, this professor has no idea how to use D2L, how to play videos in class, or how to work the projector, but they’ve got something that those other, younger professors don’t: Wisdom. That, and two hip replacements. They might even remind you of a beloved grandparent as they lecture the class garbed in three sweaters on a scorchingly hot afternoon. Listen carefully and take lots of notes as they impart the vast knowledge they have of their subject. Just don’t sit too close, or you might need a towel to wipe off all the spit.