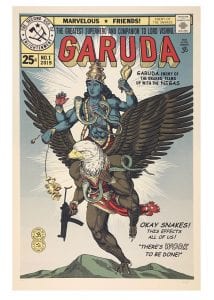 Ravi Zupa has released the second of five posters in the monthly series titled “Marvelous Adventures.” All characters for the series are pulled from Hindu mythology and showcase some of the oldest superheroes on Earth.

The print, titled “There’s Work To Be Done,” features Garuda—the courageous, loyal companion and mount to Vishnu in Hinduism. He symbolizes courage, strength and commitment, and is hugely popular throughout Asia, particularly the south east. But, as Zupa explains, Garuda’s significance varies depending on the region.

“Much like Pegasus, who in Greek mythology refers to one specific winged horse but has come to refer to the whole race of magical beings, Garuda is the name of one specific winged bird in Hinduism. However, when the character crosses over into Buddhism, Garudas refer to a type of golden-winged magical birds.”

Many of the prints in the Marvelous Adventures series refer to specific Hindu stories. This piece does not.

“I’ve made Garuda into an American bald eagle and forced him to team up with his mortal enemies,” Zupa says of the poster’s design and intention. “It seems to me that a little bit less conflict and a little bit more cooperation in our culture is in order.”

The monthly series of five prints (each with five colors, 24” x 36”) is being released in limited editions of 50 each. To order your own, visit Zupa’s online store or subscribe to his mailing list.