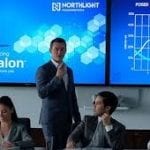 Crisis is streaming on Prime Years ago, I was driving to the low-pay, high-stress job I held at the time. I turned my head to check my blind spot and, being an imbecile, I somehow screwed up my back.* The pain was quite serious, so much so that I got to work, then reconsidered and went to an ER. After the ER doctor helpfully concluded that I tweaked my back, he gave me a prescription for Codeine and sent me home. I remember how it felt once the Codeine took effect. I felt like I was literally melting into my chair, and I was so relaxed that the Manson Family could have burst through the door and... Read More

The Top Tier of Telemarketers “Pictures were made to entertain. If you want to send a message, try Western Union.” That quote was originally attributed to film mogul Samuel Goldwyn.* It proves that, ever since the dawn of the motion picture business, studio heads usually didn’t give a damn about making an artistic statement. They are, as a great American philosopher once said, all about the benjamins. Sometimes that’s cool! Sometimes we just want pure entertainment for a couple of hours, a way to escape from a chaotic and hostile world. We don’t want to think of movies as Art, because we think Art is work. I think... Read More 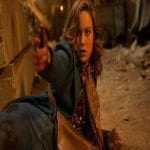 Let’s get something out of the way first. Despite being a strong supporter of responsible gun control, I absolutely love gunfights in movies. From John Woo’s acrobatic bullet ballets like Hard Boiled to the urban warfare in Heat, if a director can stage an action sequence involving firepower in a creative and compelling way, I’m so there. That’s where it gets tricky, isn’t it? How many gunfights have we seen in movies? Thousands. How many do you remember? That’s why, if you’re going to have folks blasting away at each other in your film, you’d... Read More

Black Steel In The Hour Of Chaos

God spoke to Nat Turner on May 12, 1828. Turner was a highly intelligent man, deeply religious, and a lifelong slave in Southampton County, Virginia. While toiling in the cotton fields that day, Turner remembered that he, “heard a loud noise in the heavens, and the Spirit instantly appeared to me and said the Serpent was loosened, and that Christ had laid down the yoke he had borne for the sins of men, and that I should take it on and fight against the Serpent, for the time was fast approaching when the first should be last and the last should be first.” Turner had preached the Gospel... Read More