Home › Blog › Movies › Black Steel In The Hour Of Chaos

Black Steel In The Hour Of Chaos 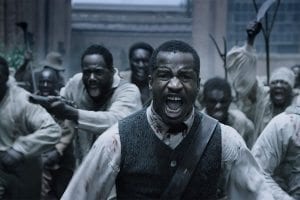 God spoke to Nat Turner on May 12, 1828. Turner was a highly intelligent man, deeply religious, and a lifelong slave in Southampton County, Virginia. While toiling in the cotton fields that day, Turner remembered that he, “heard a loud noise in the heavens, and the Spirit instantly appeared to me and said the Serpent was loosened, and that Christ had laid down the yoke he had borne for the sins of men, and that I should take it on and fight against the Serpent, for the time was fast approaching when the first should be last and the last should be first.”

Turner had preached the Gospel to his fellow slaves for years. He had the kind of encyclopedic knowledge of Scripture that only comes from being a true believer. Convinced that God had tasked him with annihilating his enemies, he planned to fight back. He began with a small group of trusted slaves, and soon raised a small army of over 70 men of color, both enslaved and free. On August 21, 1831, he began the uprising.

His band methodically moved from house to house. They freed every slave they found and killed nearly every white person they found. His plan was to spread “terror and alarm” throughout the region. It worked all too well. A white militia was raised and the insurrection was put down. The hysteria continued with the revenge killings of hundreds of slaves soon after. Turner was executed in November of 1831. In an attempt to prevent his martyrdom, he was beheaded, his body was flayed, then drawn and quartered.

It didn’t work. Turner became an African-American icon, a symbol of resistance towards America’s original sin. 185 years later, he lives on in books, music, comics, and our cultural consciousness. Nate Parker tells us his story again in the cheekily titled The Birth of a Nation,* and for a film that exploded out of the Sundance Film Festival in January, I would have thought the end result would have been more powerful and complex.

We’re first introduced to Turner as a young boy, played by Tony Espinosa. He’s brought to a holy man, who examines him and proclaims that the lad will grow up to be a powerful and influential leader. No pressure there, kid. Young Nat grows up on the Turner plantation with his mother Nancy (Aunjanue Ellis). He befriends Sam, and his mother Elizabeth (Penelope Ann Miller), the lady of the manor, takes him under her wing. She recognizes his intelligence, his yearning to read and to learn. He sees a massive bookcase jammed full of books, reaches for one. She stops him and says, “They’re full of stuff your kind wouldn’t understand.” Instead, she places a Bible in his hand, and events are set in motion.

Years pass and Nat has become a striking young man played by Nate Parker. The adult Sam (Armie Hammer) has inherited the plantation after the death of his father. That’s all good, but money is tight for the Turners. But the cartoonishly evil Reverend Zalthall (Mark Boone Jr.) has a dandy idea. Nat knows the Bible inside and out, and he’s charismatic to boot. Why not rent him out to neighboring plantations to preach obedience to the slaves? As Nat spreads the (admittedly heavily edited) Good News, his fame grows, along with Sam’s pocketbook. But he also witnesses horrors and has dreams involving bleeding stalks of corn and avenging angels.

Nat falls in love with Cherry (Aja Naomi King), and they wed. But he and his loved ones live inside a nightmare, one where they are abused by men like the thuggish Cobb (Jackie Earle Haley). When Esther (Gabrielle Union) is forced into prostitution for one of Sam’s guests, it’s the last straw, the last of an endless series of humiliations and torments. Nat begins to make plans.

Here’s where it all gets tricky. The Birth of a Nation is absolutely a passion project for Parker. He sunk over $100,000 of his own money into the budget and co-wrote the script with his college friend Jean McGianni Celestin. It’s a film that is timely** considering we’re living in a time of Black Lives Matter. Parker himself said one of the goals of the film is to “strike a blow against white supremacy and racism.” Plus, Nat Turner himself was a man who fought back.

But remember how I said it got tricky? First of all, during the real rebellion, Turner’s army slaughtered not just men, but women, children, and infants. You wouldn’t know that here, since the majority of the film spends most of its time lingering on the horrors perpetrated on the slaves, but when the rebellion starts, things are weirdly restrained. At this point, the film should be bursting with energy, a kind of messianic fervor that drags the audience along. Instead, when we should be feeling the madness of revenge along with the characters, it all sputters out.

Along similar historical lines, while rape was a horrifyingly commonplace occurrence on the plantations, it wasn’t the spark that lit the flame in the real events. Here, rape has been added to make Nat’s desire for retribution more personal. Was his life of slavery not personal enough? Plus, much like D.W. Griffith’s 1915 silent film, violence towards women is used as a justification of violence from men.

Parker has essentially made his version of Braveheart, a revenge film set in the rotten heart of Dixie that is less interested in historical accuracy and the complexity of people, and more about A Good Man Who Was Pushed Too Far. Sure, nearly all of his white characters are one-dimensional monsters, and given the point of view, I’m fine with that. But most of the slaves are one-dimensional, too. The film wants us to think that Nat was touched by divinity. Did the other people he was enslaved with also think so? When he reveals his plan to rebel, one other character offers an opinion that Nat’s plan will get them all killed. After saying his piece, he promptly vanishes from the film. Parker and Celestin’s script removes all shades of gray, which is a profound shame.

Does this mean the film is a horrible mess? Not at all. This is Parker’s first feature, and he deserves credit for making a film that is paced well, for the most part, and is beautifully shot. A sequence showing the aftermath of a lynching set to Nina Simone’s version of “Strange Fruit” has a haunting power. He’s also a good actor’s director, and he gets excellent performances out of both himself and his cast. Despite the questionable decision to hire an actor as talented as Gabrielle Union and then give her virtually no dialogue, he’s got a cast so good that, frequently, they don’t need dialogue.

I have to give Nate Parker a ton of credit for having the drive and the passion for getting The Birth of a Nation made and distributed. I’d like to see this film be a success, and give Parker and other black filmmakers more opportunities to make films their way. However, in the theater where I saw the film, there were four other people. The life, death, and legacy of Nat Turner were remarkable, and while this film doesn’t have the kind of power that a better film like 12 Years a Slave possesses, it certainly shouldn’t be ignored.