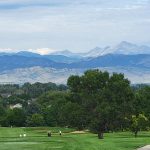 This morning’s photo was taken from the 18th hole at Indian Peaks Golf Course. Longs Peak can be seen in the background with no snow on it. This is a Hale Irwin Signature design course that offers six sets of tees suitable for any golfer. Hale has deep roots in Boulder. At the age of 14, Irwin moved to Boulder and attended Boulder High School, where he excelled in baseball, football, and golf. He later attended the University of Colorado. He was an all-Big 8 defensive back twice and won the NCAA Golf Championship in 1967. Hale Irwin turned pro in 1968 after winning the NCAA golf championship.... Read More