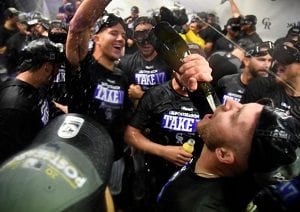 As the Colorado Rockies prepared for last Saturday night’s game against the Los Angeles Dodgers, all eyes were on the clubhouse television. The screen showed the Milwaukee Brewers with a comfortable 6-0 lead over the St. Louis Cardinals, which would most likely mean that the Rockies would have to win one more game to clinch their first playoff appearance since 2009. Clayton Kershaw was scheduled to pitch for the Dodgers, and the odds were not looking good. But in an improbable season came an improbable ending as the St. Louis Cardinals rallied to score three runs in the eighth to defeat the Brewers 7-6, thus clinching the final wildcard spot for the Colorado Rockies.

Bud Black used Saturday night’s game as a tribute as he routinely replaced the starters with back-ups as the players returned to the dugout serenaded by the energetic fans in attendance. In a season built with low expectations and even lower odds, the Rockies continued to surprise. In Las Vegas there’s a term that is used when you are already exceeding expectations and have nothing to lose. It’s called playing with house money, and that’s exactly what Colorado is doing. Here’s a look at a season few saw coming.

1) Charlie Blackmon secured the NL batting title with a .331 average and made his case for a possible MVP with his 37 HRs, 104 RBIs, 213 hits, and 137 runs scored. Chuck Nazty ended up setting a major league record with 101 RBIs from the leadoff spot.

2) Nolan Arenado continued his campaign for being called the best player in the game. The perennial gold glove third baseman finished the season with 37 HRs, 130 RBIs, and a .309 average. Arenado drove in 130 or more RBIs for the third straight season, also pacing himself for a possible MVP award.

3) Greg Holland ended up with a NL leading 41 saves in setting the team record, D. J. LeMahieu ended up hitting .310, and Mark Reynolds should be the comeback player of the year after hitting 30 HRs and adding 97 RBIs.

5) And Bud Black turned last year’s sub-.500 team into a squad that went 87-75 as the Rockies return to the playoffs for the first time in almost a decade.

The champagne flowed in the locker room later that night, but the celebration was short lived as the Rockies travel to face the Arizona Diamondbacks and their ace, Zach Greinke (17-7, 3.20 ERA) in a one game, win-or-go-home playoff. The oddsmakers won’t give the Rockies much chance of beating Greinke, and the probability of advancing and defeating the Dodgers are even worse. Prior to the start of the season, Las Vegas had the Rockies as a 40-1 longshot to win the World Series according to oddsharks.com. But these Rockies have been beating the odds all season long. 40 to 1?

So you’re telling me there’s a chance.

Alan Tapley
Alan Tapley is an educator, author, and blogger who has lived just outside of Boulder for the last twenty years.  His published work includes two novels, two children’s books, a series of cartoons in the Minneapolis Star-Tribune, and multiple sports related articles. His love for family and the state of Colorado is only matched by one thing, his passion for sports.  The first baseball game he ever attended was at Wrigley Field, before there were lights.  At the final Bronco game at the old Mile High, he allegedly cut out a piece of his seat in the South stands.  But regardless of being here for the Avalanche’s last Stanley Cup, the Rockies only World Series appearance, and all the Broncos’ Super Bowl Victories, his wife never fails to remind him that he wasn’t at the University of Colorado in 1990, like she was.  The year the Buffs football team won the National Championship
See More Articles From Alan Tapley
Tagged: Bud BlackCharlie BlackmonColorado RockiesGreg HollandLos Angeles DodgersMLBNolan ArenadoPlayoffsWildcard
Boulder Colorado Air Quality