After Lockheed Martin announced its plans to develop a compact fusion reactor, Aviation Week was given exclusive access to view the experiment and interview a member of the team developing it. Lockheed’s fusion reactor, which is the size of approximately a freight truck and takes only three months to build, is capable of keeping an airplane in flight with “unlimited range and unlimited endurance” according to Lockheed Martin’s Compact Fusion Research and Development team.

The compact fusion reactor (CFR) is in theory safer, cleaner, and more powerful than existing nuclear reactors. Until now the majority of fusion reactor systems were incapable of producing a significant amount of energy. The CFR is able to produce more energy because it is able to absorb all of the energy being created in the fusion process. 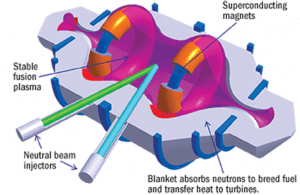 Because the CFR is so energy efficient in design, it is able to be built a tenth of the size of an advanced fusion reactor that France is building called the International Experimental Reactor (ITER).  The CFR generates 100-Megawatts and would provide enough power for 80,000 power-hungry U.S. homes.

Compared to the other fusion projects in development, the CFR has multiple benefits, including its size and speed of manufacturing. Other fusion energy generation systems are being developed, but none of the other forms of fusion generation that are known to the public are as portable or easily manufactured. Another fusion reactor that is being developed is the ITER. The ITER is being built in Cadarache, France, and is expected to generate 500 MW. However, Aviation Week says that plasma is not due to be generated until the late 2020s, and significant power is not likely to be produced until at least the 2040s. The ITER will cost an estimated fifty billion dollars and when complete will measure around 100 ft. high and weigh 23,000 tons. The early CFRs will measure only 23 x 43 feet. The design of the CFR is so compact that it can fit on the back of a semi-trailer. The design of the CFR also allows it to be easily used with the preexisting energy grid system. This means that not only can CFRs be transported inexpensively, but they also can be hooked up just about anywhere connected to the energy grid.

In recent years, Boulder has fought for autonomous and more sustainable energy production, independent from the Xcel energy grid that monopolizes the area. Perhaps the right opportunity for Boulder to generate more of its own energy just hadn’t come about yet. With the advent of the CFR, an energy autonomous Boulder could be on the horizon. A single CFR can supply enough energy for almost the entire population of the city of Boulder. Not only will implementing CFRs reduce the cost of our electricity, but it also protects our environment from long-term radioactive waste. According to Skunk Work’s team developing the CFR, Fusion has no long-lived radiation produced as an end product. First-generation reactors will have radioactive waste, but unlike the end product of fission reactors, this radioactive material will only last a hundred years.

With the advent of the CFR, an energy autonomous Boulder could be on the horizon, but also a Boulder that produces a fraction of the emissions that it does today. CFRs have been designed to be relatively quick and painless to transition to. Using fusion as a primary source of energy generation has the potential to reduce emissions caused by energy generation to zero while also reducing dependency on nonrenewable fuels such as oil. Fission generated energy has the capability to give locals what they want from their energy provider: a cleaner, greener, local and cheaper future for our energy plan.