A little over a month ago, CNN reported that, “More than 3 million of gallons of wastewater from the Gold King Mine spilled into the nearby Animas River.” According to the Denver Post the river has been safe for recreational use since a little more than a week after the spill, and even the fish in the river are now safe to eat. However, this contamination caused quite a commotion for good reason, and there are reasons to be exceedingly cautious of this sort of event happening in the future. 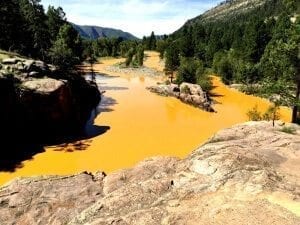 A photo of the Animas River Spill, Via http://time.com/3993992/animas-river-spill-navajo-lawsuit/

CNN reported that “Leading toxicologists say there could be health effects for many years from heavy metals such as mercury and lead that spilled into the water of the Animas River. Exposure to high levels of these metals can cause many health problems, including cancer and kidney disease, and also lead to developmental problems in children”. CNN also reported that the amount of lead alone in the Animas River “was nearly 12,000 times higher than the acceptable level set by the EPA”, and a report by Earthworks that CNN refers to in the same article says that “wastes can include arsenic, asbestos, cadmium, copper, cyanide, iron, lead, mercury and sulfur, among other material, and produce airborne pollutants”.

Communities near the Gold King Mine spill depended on the contaminated water supplies before the spill, according to USA Today. However, these waters are no longer trusted for use by many that live nearby. As USA Today reported, “One rural water user association in San Juan County, where New Mexico Gov. Susana Martinez declared a state of emergency… has spent thousands of dollars buying water from Farmington and Aztec because it had to shut down its wells after the toxic mine waste spilled into the Animas”. 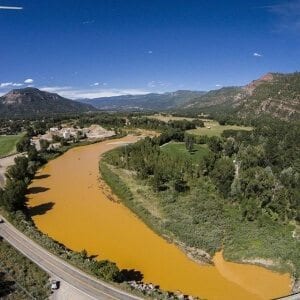 This threat is not just one that residents in Colorado face, but rather a National issue. According to Earthworks, there are “500,000 abandoned and inactive hardrock mines”, like the Gold King Mine, across thirty-two states. According to CNN, “Those half a million mines, Earthworks says, have produced 50 billion tons of untreated, unreclaimed mining wastes on public and private land”. There are many abandoned mines across the United States that could cause devastation of equal proportions, and as Earthworks explains, “Until hardrock miners pay a mine cleanup fee like coal miners have for decades, more and more mine waste time bombs like the Gold King mine are going to explode in our watersheds. Until we end hardrock miners’ special exemptions from environmental laws like the Clean Water Act, we’re going to keep creating more time bombs for future generations”.