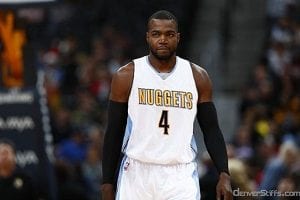 With the addition of Paul Millsap and his three-year, $90 million contract, the Denver Nuggets are hoping that the pieces are finally in place to make the NBA playoffs for the first time since 2009. Nikola Jokic and Jamal Murray both showed flashes of brilliance last season, but the question remains if the Nuggets have enough to compete in the West. Predicting the top eight.

2) San Antonio Spurs – Kawhi Leonard is the star, but year-after-year the Spurs surround the team with smart, seasoned, talented players that work within the system. Look for LaMarcus Aldridge to rebound from a poor last season, and Paul Gasol, Manu Ginobli, Tony Parker, Rudy Gay, and the other AARP guys to challenge again this season.

3) Oklahoma City Thunder – Russell Westbrook was last season’s MVP and Carmelo Anthony can still put up 20 points in his sleep, but I’m not sure the league knows how good Paul George really is. Buried in Indiana for the last decade, George, not Westbrook, is the team’s best overall player.

4) Los Angeles Clippers – The four spot may be a little high with the loss of Chris Paul, but look for Blake Griffin to dominate with the ball in his hands more, and DeAndre Jordan to continue to rule the lane on defense. Patrick Beverly, 30-year-old Milos Teodosic, and if healthy, Danilo Gallinari add nice depth to the lineup. But the season may rest on the coach’s son, Austin Rivers, to finally step-up and take the lead, and save his father’s job.

6) Minnesota Timberwolves – Karl-Anthony Towns, Andrew Wiggins, and newly acquired Jimmy Butler give the Wolves the big three necessary to win now. Add role players like Jamal Crawford, Jeff Teague, and Taj Gibson, and Tom Thibodeau’s squad is giving the league another reason not to visit Minnesota in the winter.

7) Memphis Grizzlies – Mike Conley is the most underrated $28 million-a-year point guard in the league, and it seems that every season the combination of defense, system, and Marc Gasol is just enough to make the playoffs. If Chandler Parsons can play more than 40 games, which is a stretch, the Grizzlies could move higher.

8) New Orleans Pelicans – I just can’t believe that a team with Anthony Davis and DeMarcus Cousins fails to make the playoffs. If Jrue Holiday can stay healthy and New Orleans can figure out their rotations, the Pelicans are just too talented to not make the top eight.

The Nuggets are right on the cusp as they fight it out with Memphis, New Orleans, Portland and their back court of Damian Lillard and CJ McCollum, and the Gordon Hayward-less Utah Jazz. If Jokic and Murray play like the all-stars they should be, and Paul Millsap plays anywhere close to what his contract expects him to, the sixth spot could be within grasp.

Alan Tapley
Alan Tapley is an educator, author, and blogger who has lived just outside of Boulder for the last twenty years.  His published work includes two novels, two children’s books, a series of cartoons in the Minneapolis Star-Tribune, and multiple sports related articles. His love for family and the state of Colorado is only matched by one thing, his passion for sports.  The first baseball game he ever attended was at Wrigley Field, before there were lights.  At the final Bronco game at the old Mile High, he allegedly cut out a piece of his seat in the South stands.  But regardless of being here for the Avalanche’s last Stanley Cup, the Rockies only World Series appearance, and all the Broncos’ Super Bowl Victories, his wife never fails to remind him that he wasn’t at the University of Colorado in 1990, like she was.  The year the Buffs football team won the National Championship
See More Articles From Alan Tapley
Tagged: Anthony DavisBlake GriffinCarmelo AnthonyChris PaulDeMarcus CousinsDenver NuggetsJamal MurrayJames HardenJimmy ButlerKawhi LeonardKevin DurrantMike ConleyNBANBA PlayoffsNBA WestNikola JokicPaul GeorgePaul MillsapPredictionsRussell WestbrookStephen Curry
Boulder Colorado Air Quality