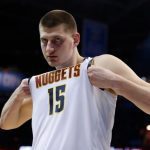 The NBA season tips off this week and the Western Conference is up for grabs.  The Suns look to shine.  The Lakers added Westbrook and Carmelo.  Golden State is getting the band back together. Doncic is the Mavericks Top Gun.  While the Jazz are sounding smooth. And don’t forget about the Denver Nuggets and their league MVP. The Wild West with its new faces, players returning from injuries, and young talent developing is about as predictable as Kawhi Leonard’s next Clipper game. But here are how the teams will finish when the regular season ends. 1. Utah Jazz – The Jazz bring back almost... Read More

Nikola Jokic – The Center of Attention 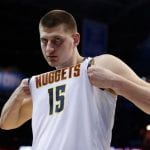 The last time a Denver Nugget won an MVP award was back in 1969-70.  The player was Spencer Haywood, the league was the ABA, and technically, he wasn’t a Nugget, as the team was then called the Denver Rockets. Since the merger from the ABA to the NBA, there have been many great Nuggets such as Alex English, David Thompson, and Carmelo Anthony.  But none have won an MVP. Nikola Jokic is looking to change that. The oddsmakers will point to a Lebron James (LAL), Joel Embiid (PHI), or a James Harden (BRK) as betting favorites to take home the trophy, but the sixth-year center from Serbia shouldn’t... Read More

Vince Carter – How Old is Old? 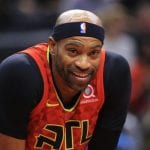 The 2019-20 NBA Schedule was just released, and the calendar is full of exciting games and stars visiting the Pepsi Center this season. The Lakers with Lebron and AD, the Clippers with Kawhi and Paul George, Zion is coming, as are Harden and Westbrook. But I want you to circle November 19th as a game you may want to attend. The Atlanta Hawks are coming to town. Now, before you stop laughing, it’s true that Atlanta was only 29-53 last season, they’re not a playoff team, and while Trae Young is fun to watch, it’s hardly worth dealing with rush hour traffic for. But a few weeks ago, Vince Carter... Read More 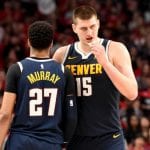 For some reason, my editor frowned upon my original idea entitled, “Who Doesn’t Want a Threesome?” so, I dropped it to a duo. With Paul George teaming up with Kawhi Leonard and the Clippers, and Lebron having tacos with Anthony Davis and the Lakers, the question begs the answer: where does the duo of Nikola Jokic and Jamal Murray rank among the NBA elite? The rules are simple.  Some guys are old, some guys are injured, but if you were starting a team tomorrow and had the choice of the following dynamic duos, how would they rank? Here’s how I see it. Lebron James and Anthony Davis—Los... Read More

The Denver Nuggets – Now What? 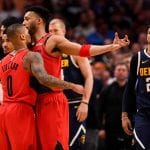 The Denver Nuggets’ outstanding season ended prematurely last weekend as CJ McCollum poured in 37 points for the Portland Trailblazers, the Nuggets went cold and missed their last 15 three-point shots, and the Pepsi Center fans left the arena with a rare homecourt loss in a pivotal game seven finale. The defeat was disappointing, but the future looks bright as Denver’s young core of Nikola Jokic (24), Jamal Murray (22), and Gary Harris Jr. (24) showed that the team is formidable and on the rise. But if you’re thinking that the Nuggets should simply work on their shooting this summer, practice... Read More

The Denver Nuggets – Remember Our Name 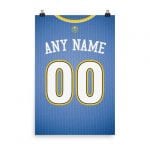 Nikola Jokic is finally getting noticed.  A max contract, the first Nugget named to the all-star team since Carmelo Anthony, his team is in first place in the Northwest Division, fighting with Golden State for the top seed in the West, and he even has a cool nickname.  The Joker. A perfect take-off on his name: silly, clever, and like Batman’s nemesis, capable of taking over. But what about the other players?  With a record of 42-20, these guys should be household names, but they’re not.  While the lack of recognition could be due to time zones, market size, or Denver’s depth and rotations,... Read More

Nuggets – Hooping for the Best 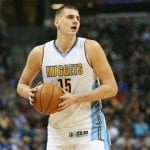 The Denver Nuggets are off to a blazing start, but in a loaded Western Conference the Nuggets will have to fight off a cast of characters that include a 6’10 superstar with a unibrow, a disgruntled stud from Minnesota, Ricky Rubio’s man-bun, and some guy named Lebron in order to make our first playoff appearance since 2012-13.  A prediction of the 2018-2019 playoff seedings. Golden State Warriors – Analytics has the league playing at a faster pace, shooting more threes, and playing small under center. Umm, didn’t the Warriors invent that style of play?  Golden State has won 3 out of... Read More 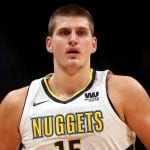 The Denver Nuggets had a busy week as they inked Nikola Jokic to a five-year/$147 million max contract, and then lured Will Barton back to the team with a four-year/$50 million deal.  So, I hope that you were entertained by last year’s team that barely missed the playoffs, because they’re not going anywhere soon. Jokic, only 23 years old, was due to make a mere $1.6 million this season but the Nuggets aggressively signed the former second-round pick to a long-term deal to keep him off the market.  Combine the existing contract of 23-year-old Gary Harris (four-year/$84 million) and the probable... Read More

Michael Porter Jr. – Worth the Wait 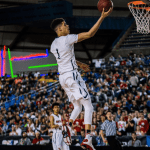 As the names were announced in last week’s NBA draft, players such as DeAndre Ayton, Marvin Bagley III, Luka Doncic, and others strutted to the stage in flamboyant suits and logo filled caps to shake hands with the commissioner and celebrate their early first round selection.  Michael Porter Jr. sat awkwardly at a table nearby waiting for his name to be called. Projected at one time as the top high school player in the nation and potential number one overall pick, Porter started to slide down the draft board over concerns of a back issue that sidelined him for most of his freshman season at... Read More 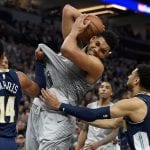 The Denver Nuggets were a mere 4.4 seconds from making the NBA Playoffs.  Nikola Jokic had the ball in his hands and a one-on-one opportunity.  But like a microcosm of the entire season, Jokic and the Nuggets came up just short.  With a 112-106 overtime loss to the Minnesota Timberwolves, Denver will have to watch the playoffs from afar as the organization focuses on next year.  Here are five moves that can get us playoff bound in 2018-2019.   1. Do nothing. Okay, almost nothing.  Nikola Jokic, Jamal Murray, and Gary Harris made great strides this year.  Under Michael Malone, Denver... Read More 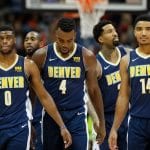 Last Thursday, the Denver Nuggets may have caught a break against Oklahoma City when officials missed a traveling violation on an out-of-bounds play, leading directly to a Gary Harris game-winning shot at the buzzer.  The dramatic win and solid first-half-of-the-season play has the Nuggets sitting at 27-25 and positioned in the eighth and final playoff spot in the Western Conference.  Failing to call traveling in this league is hardly newsworthy, but as the Nuggets fight for a playoff birth against teams like the Jazz, Pelicans, and Clippers, the breaks just keep on coming.   It’s hard... Read More 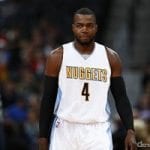 With the addition of Paul Millsap and his three-year, $90 million contract, the Denver Nuggets are hoping that the pieces are finally in place to make the NBA playoffs for the first time since 2009. Nikola Jokic and Jamal Murray both showed flashes of brilliance last season, but the question remains if the Nuggets have enough to compete in the West. Predicting the top eight. 1) Golden State Warriors – Coming off a 67-15 Championship season, the Warriors still have Kevin Durant, Stephen Curry, Klay Thompson, Draymond Green, and continue to make other teams look like the Washington Generals. 2) San... Read More

Trey Lyles – A Recipe for Success 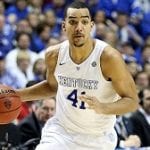 The Denver Nuggets may have been grasping at straws when they traded for Trey Lyles, the 6’10 forward from the University of Kentucky, but the formula seems pretty sound. Select a one-and-done Freshman from Kentucky with a top-15 pick, and just wait for greatness. Lyles numbers were rather pedestrian last year as he averaged 6.2 points and 3.3 rebounds per game, but unless he’s an outlier, good things are coming. 1) Since 2010, there have been 14 one-and-done Kentucky Freshman taken in the top-15 picks of the NBA draft. Those include names like John Wall, Devin Booker, Michael Kidd-Gilchrist,... Read More

With the 13th Pick of the NBA Draft… 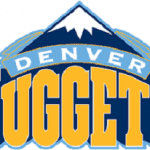 With the 13th Pick of the NBA Draft….. When the Commissioner announced that the Denver Nuggets had shipped the 13th pick to Utah for Tyler Lydon, a stretch-four from Syracuse, and Trey Lyles, a 6’10 kid with potential from Kentucky, it wasn’t quite the blockbuster deal fans were looking for. Further selections of Vlatko Cancar, a 6’8 forward that’ll most likely play overseas for a while, and Monte Morris, a 6’2 glue guy just looking to make the roster, will hardly increase ticket sales either. Lydon has some upside, and Lyles could provide some insurance in case Danilo Gallanari leaves... Read More