Earth Day and the Organic Question at Asher Brewing

Late April is always a fascinating time in Boulder, because you have two holidays that many of us truly enjoy. First up, always on the 20th of every year, is the hallowed “420”, which, to many (CU’s Administration, for example), is just a major headache. To those who actually have a reason behind 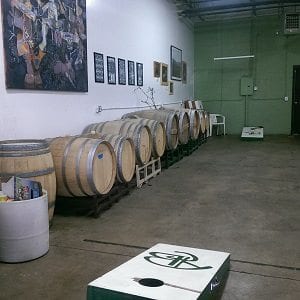 celebrating 420, and aren’t just smoking their friend’s glass to seem counterculture, 420 is an important symbol for national legalization and recognition of every person in prison for the “crime” of possession of cannabis. I guess you can tell which side of the fence I’m on. The second holiday, which drops two days after, and receives far less media coverage, is Earth Day. It’s a day where you find your closest tree, tell the tree it’s wonderful, and then hug the tree. No, Earth Day is a day to truly consider the consequences of climate change on a global scale, to reflect on your own destructive habits, and to plant a tree. You can still hug trees, if that’s your thing.

In the spirit of Earth Day (and not necessarily in the spirit of 420), I ventured on over to Asher Brewing, an all-organic brewery in Gunbarrel, Colorado. As a matter of fact, when Asher opened in 2009, they were the only cats in Colorado with an all-organic brew, making them the very first brewpub that could claim “USDA Organic.” On top of that, Asher sources 100% of their electricity from wind power, they are PACE Certified, meaning 95% of their waste is diverted from landfills, and they don’t use any GMOs in the brew process. What better place to go on Earth Day than Asher? 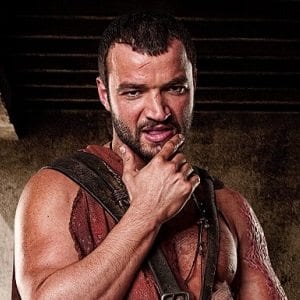 I’ve actually avoided Asher’s brewpub up to this point for two reasons. First, the brewing company shares a name with literally the slimiest, nastiest, and overall biggest jerk from the Starz series, Spartacus. I mean, look at him. Keep in mind too, if you haven’t seen Spartacus, the show is overflowing with characters to hate, so picking Ashur over any of them is like picking the biggest jerk from a store of jerks. A Jerkstore. Anyway, the second reason is a lot less flippant, and is actually related to beer. Organic beer, while admirable in its pursuits, is difficult to master. In a less kind way of saying it: organic beer has a hard time not being terrible. But, in the spirit of the holiday, I decided to venture on over to Asher Brewing, in hopes that their version of organic would break the mold. Let’s get it in!

If you’ve been keeping up with my blogs (I will not be upset if you haven’t), you’ll know that I am a fan of English mild beer, when looking for something sessionable. A kolsch (or Kölsch, if you really want to be 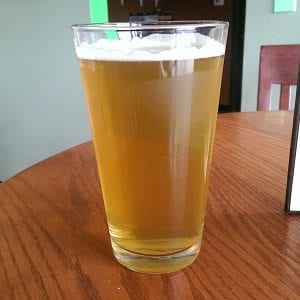 technical), is the German variant of this more mild style, where the hops plays more of the “best supporting actor” role in the beer. While technically only beers brewed in and around the city of Cologne can bear the title “Kölsch”, the style has definitely infiltrated the Colorado beer scene as a lighter style German beer that isn’t a Weissbier. With a name like Green Lantern, I could not resist, because I do have quite an affinity for superheros with very specific phobias, like the color yellow. Speaking of yellow, this one came out with a golden yellow hue and a perfectly white foam that lingered for about as long as it took me to get back to my seat from the bar. On the nose, this beer was strangely floral, with a strong bitter bite. The flavor of the beer followed suit, as delicate, fruity notes ran alongside sharp, bitter ones. Despite the style and the color, the beer is surprisingly heavy, a little too much for me to be able to actually sit down with for multiple beers. Perhaps on a warmer day, I would have appreciated the Green Lantern a little more. It certainly has a summer feeling to it, because of the fruit esters I caught throughout the drink. Going back to my previous concerns about organic beer, this one was actually very decent, but I was excited to move on in the menu.

Considering that it was Earth Day, it would be very remiss of me to not order the Tree Hugger. Now, full 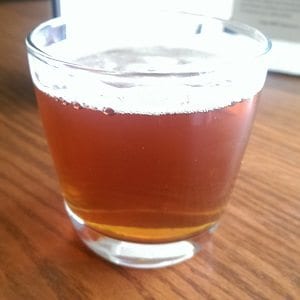 disclosure: I’m not typically a fan of Amber ale, but that’s just personal preference. This one came to me with a very thin, almost nonexistent white head (perhaps because I only ordered half a pint, but still), and has a lovely, orange-amber color. Again, for some reason, the beer had an unmistakable bitterness that almost superseded the malt characteristic of the beer. Maybe something was going on with my taste buds, but I doubt it. This one is strong, hoppy, with only a hint of the grain bill peaking through. When I really focused on discerning the different malts being used (which should be the first thing you notice about an amber ale), the Tree Hugger had a bit of a zesty, almost coffee flavor to it, but that’s definitely a stretch. Now, I will mark this one down to me not being all that crazy about ambers, but this was by far the weakest beer that I tried on the menu. It is a bit lighter-bodied than the Green Lantern, but it is still a pretty heavy, filling beer, considering its style. Not for me.

I wanted to finish with a darker beer, and porters are my dark beer jam. This one, as per its description, aims to demonstrate 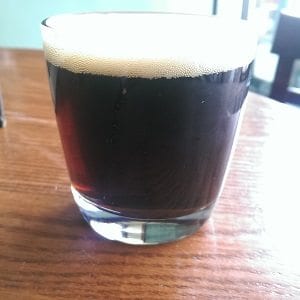 balance within the robust porter style. This one came to me with a thick, latte-colored head, and a dark brown, almost black body. On the nose, it’s very grainy, but very clean. And the flavor, oh man! It’s very rich, dark, and delicious. It has a bit of a nutty characteristic to it, but nothing too strong or offensive. Over everything, this beer is all coffee, and all chocolate cake. While the hops were not very present (and they rarely are with robust porters), I did get a hint of bitter bite, and an even smaller hint of toffee candy. It’s exactly what I want to taste when it comes to a roasty, malty, dark beer. Surprisingly, this one is less filling than either of the beers I had prior to it. It’s a nice medium-bodied porter, and is by far the best beer of the day, and definitely the best organic beer I’ve ever had.

So, there you have it, fans of Earth Day. Is it possible to make delicious beer in a sustainable way, with all organic ingredients? Absolutely. Is it difficult? Most definitely. Certainly, if you’re in Gunbarrel, and you’re looking to avoid the throngs of people pouring in and out of the new Avery building just down the street, this might be a good spot to check out. Asher offers competitive cornhole games in their “Funbarrel” room, so it might be worth it just for that. However you’d like to spend your Earth Day weekend, make sure you hug a tree, pet some grass, and remember that organic beer can be great beer; it just takes a bit more work. Just like, sustainable practices are great for the environment; they just take a bit more work. Or something like that.