Waking up to the sound of rain is a sobering reminder for the people of Boulder county. In a way, it brings us all back to those days in September of 2013, when we never thought we’d see the sun again. Some of us were lucky. Me? I was lucky. I live on the second floor, and even though people were saying, “It’s seen better days,” about my condo all the way back in the 70s, it didn’t get too much damage, a leaky overhang aside. Some of our neighbors, however, weren’t so lucky. It’s an interesting mindset for a town. Places like Portland or Seattle, cities which Boulder wants to be just like, rain is no big deal. Rain’s just another part of life down there. Here? When we don’t see our blue skies, we start to get a little nervous.

I’m not saying that running inside and drinking beer all day is at all a good strategy when dealing with flooding. As of right now, we’re not flooding in Boulder, and our rain problems are due to turn into snow problems shortly. In any case, it’s probably better to spend the next few days away from 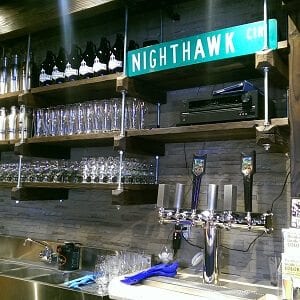 the outdoors, and what better way to spend your rainy days than drinking beer? Of course, I’m an all-weather drinker, but I feel a little justified when the skies are overcast. “Hiking? In THIS weather? No, I’ll just drink, thank-you-very-much.”

Nighthawk Brewery is the place I managed to find for this week’s edition of Max giving subjective advice on Boulder county’s brews. Aside from clearly winning the award for the most badass name ever given to a brewery in Boulder County, Nighthawk is a brand-spankin’-new spot as well, having opened their doors to the public at the beginning of this year. They’re right off Highway 36 (another fun obstacle course, especially in this weather), right off Industrial Drive in Broomfield, Colorado. Do note, when I was searching for this place, my GPS was wrong (this seems to be a trend with new breweries). Don’t go into the event planning store. Go across the street, right by where all the lads in paintball gear are congregating. Make your way into the cozy, single-room tap room, and pull up a seat. On the rainy weekend morning I stopped in, it was me, the bartender, a couple of the bartender’s friends, and a couple of beer nomads from Aurora. Perhaps the place gets more jumping, but not during my visit. It was comfortable, and it really allowed me to talk to the bartender, Rachel, about the kinds of beers Nighthawk has. I’m always a little nervous to try a new brewery’s beer, because typically, these places haven’t yet had the time to master their recipes. Will the fate of “Meh” beer befall the brave drinkers at the Nighthawk? Let’s get it in, and find out!

Wanting to start off light, but also wanting a little bit of a warm-up from the cold wetness outside, I landed on the Black and Blue. It wasn’t until I ordered this guy that I was told that this sessionable porter is brewed with over 100 pounds of blackberries and blueberries. It was also told to me after I 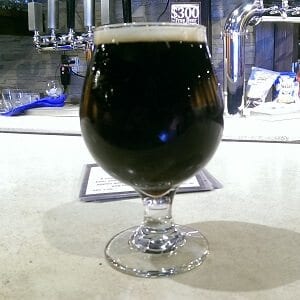 ordered that this beer was “gluten-reduced,” which is the legal way of saying something has its gluten content removed, but can’t legally be considered “gluten free”. Turns out, all of Nighthawk’s beers are this way. Uh oh. Gluten free is sort of a curse when it comes to craft beer, because it’s great in concept, but generally everyone is terrible at making them. Anyway, the Black and Blue had a faint roastiness and a very obtuse sweetness on the smell. It’s a lovely opaque brown, with a hint of violet running through the body of the beer. You can definitely taste the blackberry and blueberry adjuncts on the taste. It’s a very thin, very syrupy taste, that is indeed very sessionable – not just because of the beer’s relatively low alcohol by volume percentage, but also because I drank half of it before I even felt like I had drank anything. I probably wouldn’t have ordered this one had I known there were berry adjuncts added to them. To me, they oftentimes add such a strange sweetness that never quite gets brewed out. While this beer did have a lingering sweetness, the flavors of the berries melded very well with the cocoa and toffee flavors that shined through in the malt. While this was certainly not my favorite porter I’ve had this year, this is a great beer to whet your palate. It’s unique, it’s certainly pretty tasty, and its low ABV makes it one you can keep revisiting, if your heart so desires.

So, on the menu, the style attempted with this beer is a “ciderweizen”. This beer was attempting to be as close to a cider as the brewery could legally brew (turns out, in Colorado, breweries may not legally produce cider unless they have a liquor license, and a separate facility for their cider production. Talk about screwy.). In short, this is a traditional Hefeweizen, a German wheat beer with a European 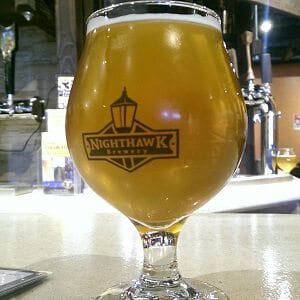 yeast, with a whole mess of apples added to the mash – actually, as many as they could before the state would come down on them saying “Bro, this is cider, not beer,” as if it makes any lick of difference. Knowing that this beer is billed as a Ciderweizen, you get pretty much what you expect. The strong flavors of crisp apples and cinnamon mixed extremely pleasantly with the banana flavors typical of German wheat beers. It’s cool, it’s crisp, and it’s certainly perfect for those seeking an “entry-level” beer. Cider drinkers, take note of this one. While it’s not nearly as sweet or as crisp as you might be used to with a true cider, this one comes pretty close. And then you can say you’re drinking a beer, and not a cider, and we know how important that can be. You know, this beer was pretty good. I think the Loiter would be better received on a hot day, as a way to quench your thirst. For me, it was exactly what I expected, but having never tried something like it, I’d say it was worth it. Would I order it again? Probably not, and the next beer on the list is the big reason why.

So, anytime that I see a sour beer on the menu, my ears perk up a little bit. I don’t think I’ve talked about my sordid love affair with sour beers on this blog yet, so I’ll catch everyone up real fast. I used 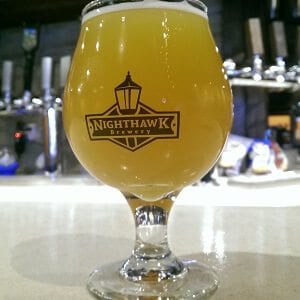 to turn my nose up at them, saying they reminded me of feet and spoiled beer (which, if you REALLY think about it, is pretty accurate). One night, my roommate Kyle (who happens to be more obsessed with craft brew than me) came home with some sour beer; maybe a Surette from Crooked Stave down in Denver. Perhaps I was just in a good mood. Perhaps it was the half gram of cannabis that I had minutes beforehand, but that beer was unstoppable, just like my quest to try all the sour beers has been ever since. This one was soured with lactobacillus, meaning this one should be more on the funky-grandpa-foot side of sour beers (rather than a beer soured with brettanomyces, which tend to be more sour-just-ate-a-lemon-oh-god-why beers). The beer smelled like basil and thyme, with a lingering sweetness. The flavor? Holy wow. This one was not funky at all; rather, it tasted like lemon drop candies. With a solid backbone of some delicious spices and herbs, a hop profile that doesn’t exist, and some very light malts, this one is a winner. I want more!

So, there you have it, Boulder. Stay dry, stay safe, and stay thirsty. Nighthawk Brewery has some twelve beers for you to try out, plus a handful of homebrewed sodas, just in case you’re a wimp or a child. I’m kidding – the sodas are actually great. Try the cream soda. No, I take that back. Try the beer. You’ll thank me later.