Think about the biggest brewery you have ever been to. For many Coloradans, that answer is pretty easy: just take Highway 93 from Boulder to Golden. Yeah, you know who I’m talking about. The Coors Brewery in Golden, Colorado has a brewing capacity of some 13 million barrels annually, which comes out to something like 410 million gallons of beer. Holy alcohol, Batman! Okay, maybe that’s a little too big to conceive. Consider, then, the largest microbrewery you’ve been to. New Belgium? Sam Adams? Avery? While still at only a fraction of the global production that MillerCoors pumps out, these places still have millions of barrels of suds being brewed every year. Now, consider the absolute opposite side of the commercial beer spectrum. Consider a place like J Wells Brewery, a tiny microbrewery (or nano-brewery, as some would call it), hidden in east Boulder.

Just east of Flatirons Parkway, off of Pearl, right behind the Toyota dealership, sits the tiny garage that holds the entirety of the J Wells Brewing operation. Alongside several other small
companies, you’d be hard-pressed to find this place on accident. Even though I’ve drank at J 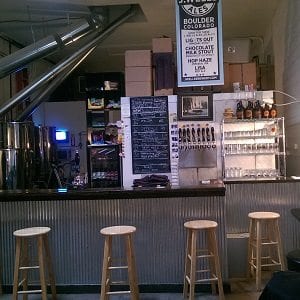 Wells a number of times, I still had to make sure I was heading into the right parking lot, and then into the right door. No, we are a long way away from the mega-brewery opened by Avery late last month. The brew equipment is separated from the front of the house by a simple divider, a stack of boxes and crates, and banners and t-shirts hung up. During my latest visit, a water tank used in the brewing process sat unceremoniously in the corner of the tap room. Aside from a few dart boards, a few tables, and chairs pulled up to the bar, it would be difficult to discern that you were actually sitting in a brewery, and not just a buddy’s man cave.  However, I do think there’s a lot of charm to drinking in a place like this. Despite being open for just over two years, J Wells feels a lot like a great insider secret. While it might not be a place I’d take a date, it feels like I’m going to my buddy’s garage (if Jamie Wells happened to be my buddy), and sampling some of his elevated homebrew.

Despite the tiny brew system J Wells employs, there were no less than eight brews on tap, and a few more available in bombers. Jamie, the owner and head brewer, has emphasized his own taste for British style ales, as well as west coast pale ales and IPAs. The two styles sort of congregate in this tiny garage on the eastern side of Boulder. However, as J Wells expands, and adds more people into the brewing process, the beers have also become more diverse. I decided to try a few of the styles that J Wells has established its growing following from, as well as a new addition to the lineup.

The English are not known for developing extraordinarily flavorful ales, which is why they’ve had to add “bitter” to the style of any beer that isn’t just a 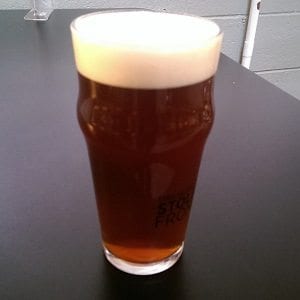 lighter English session ale. Traditionally, these British ales are cask-conditioned, served at cask temperature, and are hand-pulled through a beer engine or poured directly from the cask (“real beer,” as it’s called). I’m so glad J Wells has a beer engine for this delightfully British ale. The engine gives this beer a frothy and thick head, which crowns this ruby and brown brew. The nose is very subtle, with perhaps the slightest inclination of the grains used. The beer is delicate and bitter, most likely from hops used early on in the boil. However, pulling this beer through the engine does help give this beer a creamy texture. The beer is extremely sessionable, with an ABV just under the standard 5%. It’s incredibly easy to drink, and finishes without very many strong or lingering flavors. If you want an example of classic British bitter, this is about as close as you can get in the county.

Finally, all that German I took in high school is helping me out! This beer, which translates to “mountain state,” is oddly out of step with the rest of J Wells’s lineup, which consists of IPAs and 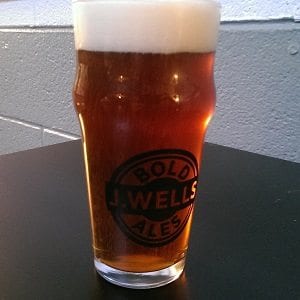 English ales. The Dunkelweizen literally translates to mean “dark wheat” beer. It’s sort of like the sister who is constantly overlooked by her prettier and more popular sister, the Hefeweizen. Personally, I prefer dunkels because they typically sport richer and stronger bodies. This beer looked strangely identical to the Defiance I was served before. Not wanting to start an international incident between English and German beer snobs, I sunk my nose into the glass, and was greeted with the strong smell of banana and clove. The head was like a fresh mousse, which completely clung to the glass. The flavor has absolutely no hops apparent; rather, the beer is full of dark and malty, almost yeasty flavors. To me, the Bergstaat tasted a lot like drinking a slice of banana bread. This one tasted exactly in line with what you’d expect with a Dunkelweizen. It’s bready, it’s clean, and it’s classically southern German.

The Imperial IPA, also known as the Double IPA, is a west-coast best-coast innovation, to keep up with the hopheads who didn’t believe an IPA was hoppy enough. There’s nothing historically 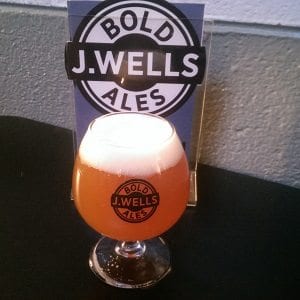 “imperial” about these beers, either. The name comes from the Imperial Stout style, which was brewed for the Russian Czars of the 1800s. So, J Wells took this idea of a strong, full bodied double IPA, and cranked it up yet another notch. With a strong 8.8% ABV, and a blistering 130 IBUs present in this beer, it’s all alcohol, and it’s all hops. “Oh damn,” I said out loud as I took a sniff of this hazy and orange beer. All citrus, all pine, all hops. The flavor pretty much followed suit. This beer was bitter, it was citrusy, it was piney, but wow: it was not that hard to drink. Of course, this would not be the beer I bring to my girlfriend, who has sort of a natural aversion to hops, and this is one of the hoppier beers I’ve had in quite some time. Furthermore, even seasoned IPA veterans might be puckering their lips at this full-bodied experience. I will say, after this beer, I’m glad that by friend Jeff drove me to and from the brewery, because this is a beer that hides its alcohol content very well. While you know it’s there, from the syrupy and full finish, you don’t really realize how much it’ll stagger you until you get up to pay your tab. Bravo!

To be honest, after visiting J Wells, I’ve been debating whether or not I’d actually like to write about them, but perhaps not for the reason you’d expect. I’m a selfish manchild, and I don’t like sharing good things. While I wish all the success in the world to Jamie, and the rest of the J Wells crew, I would hate it if this little secret and delicious beer spot in Boulder suddenly became a jumping place. Part of the brewery’s charm is the fact that you can come in, pull up a chair, and chat with the owner, which is an experience obviously missing from many of Boulder’s breweries. It’s a place where you can walk in, grab a pint of some classic English ale, grab a handful of darts, and see who else is in on Boulder’s great little secret.