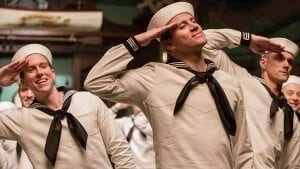 For anybody who likes movies, especially those of us who are approaching or have already reached a certain age, there’s a temptation to drag out the hoary old chestnut of, “They don’t make ’em like they used to.” That statement is the rhetorical equivalent of Schrodinger’s Cat, where it is both true and false at the same time. Please allow me to explain.

On the one hand, as long as there have been movies, the majority of them have been garbage. Jump onto your favorite search engine and plug in any year you care to name. You’ll see that no matter the year, most films released then have sunk back into well-deserved obscurity. Sure, there are certain years like 1939, 1975, 1982, 1999, and 2007, where it seemed we were being showered with cinematic riches. But every year, great movies are released. Every single year. You just have to wade through junk to find them.

On the other hand, there’s something about the movies released during the 1950’s that had a certain magic to them. Westerns were riding high.* Hitchcock  had a nearly flawless decade of films. Movie stars had a the flawless appeal of Olympians. A big reason for that was the careful cultivation and manipulation of their public image. Image is everything until it isn’t. Joel and Ethan Coen, two of the world’s greatest filmmakers, have given us a brainy farce about the Golden Age of Hollywood in Hail, Caesar!

Eddie Mannix (Josh Brolin) is the Head of Physical Production for Capitol Pictures. To say that Eddie is a busy man would be somewhat of an understatement. He’s a problem solver, a fixer, and his job is to smooth out wrinkles. He must deal with the unwed pregnancy of leading lady and synchronized swimmer DeeAnna Moran (Scarlett Johansson). The studio mandated casting of Hobie Doyle (Alden Ehrenreich). Doyle is a cowboy star, a guy who is an absolute rock star when it comes to riding and rope tricks, and nowhere near as dumb as he seems. The studio wants to “promote” him into the leading man of an elegant drawing room comedy, much to the irritation of fastidious director Lawrence Laurentz (Ralph Fiennes). He must dodge twin sisters and gossip columnists Thora and Thessaly Thacker (Both played by Tilda Swinton), who are trying to sniff out scandal. He goes to confession, nearly compulsively, to sincerely repent for sneaking cigarettes. He also briefly spends time with Mrs. Mannix (Alison Pill).

But Eddie’s most pressing issue concerns Baird Whitlock (George Clooney), the imbecilic star of the studio’s prestige picture, a vast Biblical epic. Problem is, Whitlock gets himself kidnapped by a group of genteel Communist screenwriters. Thrown into the mix is song-and-dance man Burt Gurney (Channing Tatum), along with a recruiter from Lockheed who aggressively courts Mannix to do some “serious” work, and who may or may not be the Devil.

The last time the Coens made a full-on comedy was in 2008 with Burn After Reading. While a recurring theme in their work has to do with people being mercilessly battered by forces beyond their control, I’m not sure they’ve ever made a film that’s quite so joyful. But Hail, Caesar is essentially a farce, a chance to hang the scaffolding of a plot around masterful musical numbers and repeated moments of high comedy. Along with their recurring cinematographer Roger Deakins, the Coens put their visual stamp on the old Hollywood classics, like Westerns, epics, and elegant comedies.

You can safely ignore the plot, and still be gobsmacked by the various set pieces. Channing Tatum’s “No Dames,” musical number is cluelessly homoerotic and wildly entertaining. Frances McDormand’s cameo as an editor who is a trifle too focused. A scene where Fiennes’ director attempts to guide Ehrenreich’s redneck in the line reading of, “Would that it were so simple,” reaches glorious heights of insanity. Don’t get me wrong, I love the Coens when they go dark, like the moral nihilism of No Country For Old Men, or the existential failure of Inside Llewyn Davis. But this film is downright sunny, optimistic even.

This is George Clooney’s fourth film with the Coens. He’s a generally dependable actor, but he’s never better than when the Coens have him playing a preening jackass. Nobody in Hollywood can play stupid quite as well as Clooney, and he’s a delight, whether he’s offering tortured line readings as a goofy centurion, or he’s cheerfully adopting the Communist ideology.

Josh Brolin is the film’s rock, a steady and dignified presence around which much madness orbits. That’s not to say he’s boring, far from it. During the last few years, Brolin has become an actor of exceptional range. He’s played George W. Bush, tragic murderer Dan White, and intergalactic villain Thanos. The guy can do anything.** Mannix is a decent man, who has to get a little bit shady sometimes to take care of things

Mannix is ultimately a decent man*** though one who has to get a little bit shady sometimes to take care of things. His job is one that he believes in, and if he has to slap around a star or employ extralegal methods to make questions go away, it’s fine. He does it all in service of the picture. The Coens believe that, while religion may become needlessly complex or let you down, the movies will always be there for you. That’s a philosophy I can get behind.

*I wonder if there were think pieces written then by people complaining that too many Westerns were being released? I doubt it, because unlike the loathsome whiners of today pissing and moaning about comic book movies, people in the ’50’s knew how good they had it.

**He can probably fly. It wouldn’t surprise me.

***The real Eddie Mannix was a good bit less decent. He was a fixer for MGM and was somewhat associated with the death of actor George Reeves.