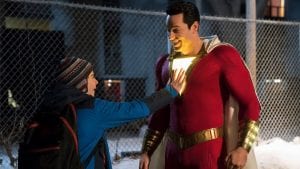 Director Zack Snyder has thoughts. During a charity event screening of his films Dawn of the Dead, Watchmen, and Batman v. Superman: Dawn of Justice, he was asked about the depiction of Batman. Specifically, the depiction that the Caped Crusader was awfully, well…homicidal. During the film, Ben Affleck’s Dark Knight straight-up mows down crooks with cunningly hidden machine guns in the Batmobile and decimates goons in a brutal warehouse battle. It’s all a bit much.

Snyder responded with the immortal quote, “Someone says to me: Batman killed a guy. I’m like, ‘F**k, really? Wake the f**k up.” It’s not surprising that the guy who made 300 and who is a noted devotee of Ayn Rand would make a superhero movie with an almost complete lack of a light touch. Snyder directed Man of Steel, the film that kicked off the DC Expanded Universe as a direct competitor to the Marvel Cinematic Universe. One could say his films are gritty, dark,* and his aesthetic set the tone of the universe initially.

You know what? That’s okay, provided you’re telling the right story with the right characters. The superhero genre is wildly malleable, and a character like Batman can work with a darker-toned story. That shouldn’t be the default tone, though. Superman doesn’t need to be grimdark. Ever. The good news is that the pendulum is swinging the other way and the films of the DCEU are lightening up.

Wonder Woman had a clever sense of humor. Aquaman had crazy set pieces involving armored seahorses. While the films of the MCU are often criticized for having interchangeable tones, the DCEU seems to be going in a more director-focused direction. That’s a smart move, and we’re seeing more evidence of that with the newest installment, Shazam! 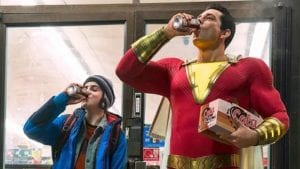 The holiday season can be a bummer. 14-year-old Billy Batson (Asher Angel) is acutely aware of that. He’s been in and out of foster care for years in Philadelphia, and he’s developed a reputation for being a touch troublesome. Can you blame him, though? As a young child, he was separated from his mother, and he’s got a list of all the Batsons located in the area. Billy knows she’s out there somewhere.

His search is interrupted when he’s placed into a foster home run by the kindly Rosa Vasquez (Marta Milans) and Victor Vasquez (Cooper Andrews). They have five other foster kids, all of them welcoming and warm. Billy particularly clicks with Freddy (Jack Dylan Grazer), a sarcastic fan of the new heroes that have been coming out of the woodwork. In a nice touch, Freddy even owns a crumpled bullet fired at Superman. The bullet even has a certificate of authenticity.

Then…things get weird. While bullies are hassling Freddy, Billy steps in. They give chase and Billy escapes on the subway. Only everyone else on the train disappears. The train arrives at the Rock of Eternity, the lair of the Wizard Shazam (Djimon Hounsou). The magician needs help. He’s looking for someone to transfer his power to, someone pure of heart. Billy fits the bill.

With a crack of thunder, Billy is transformed into a hilariously swole superhero (Zachary Levi) with a vast array of abilities.** He’ll need them, since the embittered Thaddeus Sivana (Mark Strong) is out there. Sivana had his own encounter with the Wizard, and he’s on a quest to release the Seven Deadly Sins upon the world. Like you do. 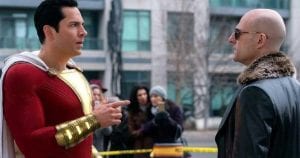 If Shazam! were a household pet, it would be an adorable Labrador retriever. This dog is friendly, a little crazy, and just wants to love you all the time. He wants to go for miles-long walks. He wants to play fetch for hours. When you stagger home, exhausted, and you just want 15 minutes of peace, the dog jumps on you continuously, almost saying, “OH MY GOD I LOVE YOU SO MUCH LET’S GO FOR A HIKE IN THE FOOTHILLS AND CHASE SQUIRRELS AND DO DOGGY THINGS COME ON GET UP GET UP GET UP.”

That’s not to say I disliked it. While director David F. Sandberg has made a film that feels incredibly long at times, it’s always punctuated with a great deal of humor, heart, and some full-on horror occasionally.*** The film feels like a throwback to the output of 1980’s Spielberg and Zemeckis, where it occasionally is just gory enough for kids to feel like they’re getting away with something watching it.

Long stretches of the screenplay by Henry Gayden are very funny, particularly the second act. After Billy has gotten his powers, he doesn’t immediately start fighting crime and protecting the good citizens of Philadelphia. He and Freddy try to buy beer. He fires lightning out of his fingers to charge the cellphones of passersby. He becomes an online sensation by just screwing around with his powers. I think the average teenager would behave in much the same way, and I liked that. There’s some smart writing on display mocking the tropes of superhero cinema, but the script has real heart when necessary.

Let’s also take a moment to direct praise at the script for a positive portrayal of the foster system. For years in movies, foster homes have been depicted as hellholes populated by people who are dismissive at best and as demonic at worst. The reality is that the vast majority of foster parents are people who genuinely want to help kids who have caught a tough break. For a major blockbuster to push this concept is a wonderful thing. 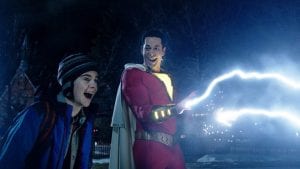 I liked the cast, and it’s always a treat to see Mark Strong lean into playing a villainous maniac. As Billy, Asher Angel is a quiet center to the madness going on around him. As his grown-up alter ego, Zachary Levi’s Shazam is perfect. He’s brimming over with that jumpy Labrador retriever energy, and he believably shifts from enthusiastic to a little selfish to embracing the mantle of responsibility. I would have liked for the two of them to have had performances that were in sync a little bit more, so you could feel like this was two sides of the same person.

With all that, I was impressed to see Jack Dylan Grazer walk away with the entire movie. His Freddy is legitimately witty, a kid who uses his wit as a shield to protect himself from a frequently hostile world. Playing that balance without coming off as bitter is not easy, and Grazer allows his sadness and fear to peek out.

Superhero comics were originally aimed at kids. It’s refreshing to me to see a superhero movie that remembers that, leans heavily into the adolescent wish fulfillment, and isn’t obnoxiously self-serious. Shazam! is a rarity: a family movie that the entire family can genuinely enjoy without having seen two dozen other movies first.

*One could also say that his films sometimes try way too hard.

**The good people at Wikipedia tell me that Shazam is actually an acronym, and Billy gains the wisdom of Solomon, the strength of Hercules, the stamina of Atlas, the power of Zeus, the courage of Achilles, and the speed of Mercury. Thanks, Wikipedia!

***Tonally, I kept thinking Shazam! feels like Gremlins. Dollops of goofy comedy, then some fairly intense and gnarly stuff takes place. You’ll probably notice this with the Seven Deadly Sins creatures, or when Sivana kills a guy by throwing him out of a skyscraper.

Tim Brennan
Tim has been alarmingly enthusiastic about movies ever since childhood. He grew up in Boulder and, foolishly, left Colorado to study Communications in Washington State. Making matters worse, he moved to Connecticut after meeting his too-good-for-him wife. Drawn by the Rockies and a mild climate, he triumphantly returned and settled down back in Boulder County. He's written numerous screenplays, loves hiking, and embarrassed himself in front of Samuel L. Jackson. True story.
See More Articles From Tim Brennan
Tagged: asher angeldavid f sandbergdjimon hounsouhenry gaydenjack dylan grazermark strongshazamzachary levi
Boulder Colorado Air Quality