On its face, nostalgia isn’t always a bad thing. It can be comforting, the dwelling on people, events, and things in the past, a mental bubble bath that we can slip into with a content smile. Some researchers even believe in the powerful psychological benefits of nostalgia. Hell, the foundation of the Trump campaign and presidency is based in the belief of a better* America of decades ago.

Nostalgia has some nasty traps, too. The obvious one is that bygone eras are only great if you happen to be a straight, white guy. For literally everyone else, it sucks pretty hard. Worse yet is that nostalgia can give people permission to enter an emotional block of amber and willingly refuse to evolve. I’m not just talking about childishness, I’m talking about the refusal to check one’s privilege due to an idealized past. That refusal can create problems, such as the Civil War statue controversy. In 2011, Ernest Cline wrote his first novel, Ready Player One. How is it? Well….that’s complicated. I found it to be a fun book with some massive issues. First, it’s not particularly well written, so if you’re expecting something at the literary level of Truman Capote, you’re going to be a touch disappointed. Second? A distressingly large chunk of the content has to do with pop cultural minutiae, particularly that of the 1980’s. While I love a lot of that kind of thing as well, if you removed the references, you’d have a novel that clocks out around seventeen pages long. Third, holy lord Jesus Almighty, does this book have problems when it comes to female objectification.** I wouldn’t go so far as to say it’s misogynistic, yet it definitely gets creep

All of that tells us the novel is highly flawed. Did all of that stop The Beard himself, Steven Spielberg, from adapting it into his latest film? It did not. Unlike Jaws, Ready Player One isn’t a classic. Like Jaws, Spielberg has extracted a solid film from the pages of a weak book.

It’s the year 2045, and America is in an irreversible decline. Instead of trying to solve problems, people are doing a 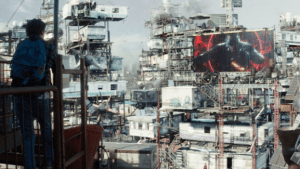 pretty bang-up job of hiding from them. They do so through the OASIS, a shockingly immersive virtual reality world. Developed by visionaries James Halliday (Mark Rylance) and Ogden Morrow (Simon Pegg), the OASIS allows users to do or be virtually anything. Want to hang glide through a Category 5 hurricane, or live in Minecraft? It’s all doable.

Wade Watts (Tye Sheridan) has made himself exceedingly comfortable in the OASIS. You can’t blame him, since in reality he’s a young man living in The Stacks, an RV slum in Columbus, Ohio, with his aunt and her loser boyfriend. He has no prospects, no future, no way out. Within the OASIS, his avatar is Parzival, and his best friend Aech (Lena Waithe) is a friendly orc with a knack for building essentially everything.

Since the death of James Halliday, everybody in the OASIS has something to look forward to. Upon his demise, Halliday left behind three hidden keys which unlock a golden egg. Whoever finds the egg assumes control of both the OASIS and Halliday’s personal fortune. To unearth the keys, one must also have an encyclopedic knowledge of 60-year-old pop cultural trivia. Good thing Wade does, otherwise this would be a far shorter movie. 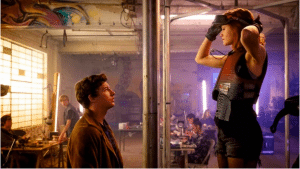 As is so often the case with movies like this, there’s an evil corporation also gunting (“egg hunting”), led by CEO Sorrento (Ben Mendelsohn). Using an army of indentured servants, Sorrento wants to exploit the commercial possibilities of the OASIS. Wade/Parzival and Aech team up with the well-known gunter Art3mis (Olivia Cooke) and players Sho (Philip Zhao) and Daito (Win Morisaki) to preserve Net Neutrality…I’m sorry…find the egg and keep the OASIS free from rapacious capitalism.

Ready Player One is a hell of a lot of movie. In terms of pure spectacle and “Gee whiz, look at all the stuff happening on-screen,” you’ll absolutely get your money’s worth. At times, there’s almost too much happening. There’s an impressive amount of sensory overload at play here, even more impressive considering that the 72-year-old Spielberg is masterminding it.

Why did Spielberg make this film? With the omnipresent rise of the MCU, did he do it to show he’s still got the juice? He does, and like him or not, this film proves yet again that Spielberg is the greatest commercial director in the history of film. His set pieces are masterfully executed, and there’s one extended sequence in the middle of the movie that’s jaw-dropping in terms of audacity and execution. If nothing else, he’s skillfully made a movie that’s enormous fun and that had me wearing a stupid grin for much of the running time.

Did he make the film to comment on the meaning of his legacy? I hate to say it, but given Steven Spielberg’s age and 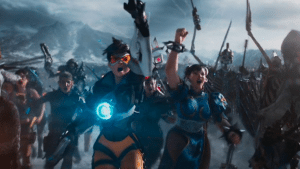 barring the discovery that he’s a literal God of Cinema, there likely aren’t too many more films left in him. The screenplay, written by Zak Penn and Ernest Cline, attempts to explain that pop culture is most important when it acts as connective tissue for people. That is, when it’s not relentlessly hammering the audience with exposition dumps. I do give a tentative thumbs-up for the script making the relationship between Parzival and Art3mis less skin-crawling.***

Spielberg’s actors are strong, despite some thuddingly obvious casting. Ben Mendelsohn playing a vile yuppie with echoes of The Breakfast Club’s Paul Gleason? Okay, sure. Tye Sheridan does what he can as Wade, and despite the fact that the role is a bit of a blank, Sheridan is enjoyable. I liked Mark Rylance as Halliday, and he brings a still and quiet humanity to an often berserk FX festival.

Another opportunity was missed by not having more of a focus on Lena Waithe’s Aech. She’s got a swagger throughout the film that covers a sweet center, and having a black woman at the center of a film about mostly white pop culture would have taken the movie to some fascinating places. The same goes for Olivia Cooke as Art3mis, and while I’m thankful she’s given more to do than play “the love interest,” she’s stuck in an underwritten role.

The novel Ready Player One isn’t much more than, “Look at the thing I like!” There’s nothing wrong with that, and this rickety book allowed Spielberg to make his first purely escapist film in seven years. You may have issues with nostalgia, and you might find it to be juvenile at best or destructive at worst. Whatever motivations lurked within The Beard that led him to make this movie, there’s an undeniable craftsmanship at work, a masterclass of escapism made by a titan.

**Which you can read more about right here.

***Though an opportunity was missed. In the novel, Cline refers to Art3mis as “Rubenesque.” Olivia Cooke is a fine actor, but she’s pretty far from that. This would have been a great opportunity for some body positivity through casting a curvier actor. That’s probably asking too much of Hollywood, though.