Home › Blog › Movies › Nobody Gets Away Clean

Nobody Gets Away Clean 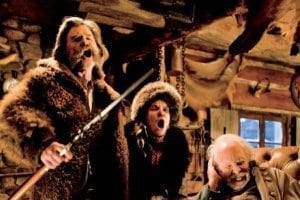 If you’re an aspiring or practicing writer of fiction, there’s one rule you’ve most likely had drilled into your head. You’ll frequently hear this from creative writing instructors and hacky screenwriting books. Your protagonist, or hero, must be likable, in order for the audience to relate to them. This is wrong.

The fact is, your protagonist needs to be interesting. That’s it. Robert De Niro’s Jake La Motta in Raging Bull is a roiling sea of violence and sexual confusion. Leonardo DiCaprio’s Jordan Belfort in The Wolf Of Wall Street is totally consumed by greed. Michael Rooker’s Henry in Henry: Portrait of a Serial Killer is a dead-eyed killing machine. All of these characters, plus many others, are thoroughly repugnant human beings, and they’re also fascinating.

It all depends on the kind of story you’re telling and the way you tell it. Shakespeare once wrote, “Hell is empty and all the devils are here.” Quentin Tarantino, one of the world’s greatest filmmakers, understands this. He specializes in indelible characters that either embrace or wrestle with their dark sides. They may be awful, but they’re always human and there’s always a reason for them. A few of them are:

Tarantino’s eighth film, The Hateful Eight, has been unleashed. It’s a nightmarish stew of a film that includes a zesty shake of extreme violence,  a hefty drizzle of racism and misogyny, and a pinch of nihilism for flavor. All in service to a howl of rage towards America’s original sin of slavery. Shot on gorgeous 70mm film* in Telluride, the film is set in the years immediately after the Civil War.

We meet Civil War vet Major Marquis Warren (Samuel L. Jackson), on the side of a snowy Wyoming road. He flags down a carriage carrying bounty hunter John Ruth (Kurt Russell), and his prisoner, the treacherous Daisy Domergue (Jennifer Jason Leigh). Ruth has captured Daisy and is escorting her to the town of Red Rock for hanging. Along the way, another passenger is picked up, Chris Mannix (Walton Goggins). Mannix used to be an outlaw, but he claims he’s now the new sheriff of Red Rock. A blizzard is right on their heels, and the carriage is forced to take shelter at Minnie’s Haberdashery, a lonely roadhouse in the middle of nowhere.

When they arrive, they’re greeted by the surly cowpuncher Joe Gage (Michael Madsen), the evasive Mexican Bob (Demian Bichir), highly racist Confederate General Sandy Smithers (Bruce Dern), and foppish hangman Oswaldo Mobray (Tim Roth).**  Minnie is nowhere to be found, neither is her husband, Sweet Dave. The group learns that, due to the blizzard, they’ll be stranded together for a few days. That sucks pretty hard for everybody, given that the close quarters create an environment of paranoia, revenge, and violence.

Upon surface level examination, it seems that Tarantino is riffing on John Carpenter’s remake of The Thing.*** A group of people are trapped in a snowy hell and trying to uncover a hidden threat while dealing with shocking bursts of ultraviolence. That’s all true, but Tarantino is going for something deeper and darker. Consider his previous two films, Inglorious Basterds, and Django Unchained. Both of them were revisionist revenge fantasies, where historical oppressors were made to pay, and pay hard, for their crimes. They were films that proudly hoisted a blood-drenched middle finger towards the Nazis and the Confederacy, and entertained the possibility that things might work out.

Things do not work out in the world of The Hateful Eight. Using a period piece, Tarantino is absolutely commenting on modern America, and how we seem to be sliding backward. It’s a world where a 12-year-old is almost immediately gunned down by police for the crime of brandishing a pellet gun. It’s a world where a presidential candidate blithely calls for the mass deportations of both Mexicans and Muslims. It’s a world where white people justify bigotry with the moronic premise that they themselves are actually being discriminated against.  We have never resolved slavery, we just try to find different ways to oppress those different from us. The distance between the Reconstruction Era and 2016 is close, perhaps too close.

The cast is excellent all the way around. Kurt Russell was born to be in Westerns, with his John Wayne-esque drawl and truly impressive facial hair. He’s one of our most likable actors, but it’s really, really tough watching him absolutely beat the hell out of Jennifer Jason Leigh. It feels like Tarantino couldn’t get Christoph Walz to play Mobray and Tim Roth was his second choice, but Ross’ hangman is effete and constantly, often inappropriately, polite. As Mannix, Walton Goggins does next-level work showing us hidden layers to his character.

But two performances stand out. Remember how I mentioned that Jennifer Jason Leigh’s Daisy is almost constantly brutalized? Bear in mind that she plays a role that women don’t often get to play, that of the unhinged maniac. Daisy is filthy, horribly racist, and incredibly dangerous. She’s a walking nightmare, always calculating. As an actor, Leigh isn’t afraid of anything, and even when she’s splattered with blood and in chains, she commits fully to the part.

Samuel L. Jackson’s Major Warren is arguably the least worst, but he’s no hero. He’s committed wartime atrocities in the name of revenge for himself and the victims of slavery. Tarantino uses his character to examine the horrors of war and revenge. Odds are that Warren can justify every act he committed, but does that make it right? We like the guy, but occasionally the mask slips and we see a thousand-yard stare.

Tarantino has created a highly immersive world populated by fully fleshed-out characters, but he’s also made a movie that’s incredibly cruel. The third act, in particular, is chock full of cruelty and meanness. There will be viewers that will be shocked, I promise you. But it’s supposed to be unsubtle, and perhaps today’s America needs to be punched in the head in order to get the point across. The point needs to make it to the police boycotting this film, to politicians downplaying racism, and to ordinary people overcome by fear. It may be completely unlikable, but it’s filled with poisonous truth.

*If you can, try to see the film in the Roadshow format. It runs about 3 hours long and there’s a 15-minute intermission, transforming a regular moviegoing experience into an event.

**I submit to you that nobody creates character names as well as Tarantino. They’re often weirdly formal, and they always fit both the character and the actor. Yes, even Beatrix Kiddo.

***A rare instance where the remake is miles better than the original.