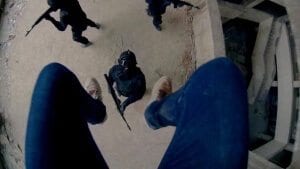 Some films, like Spotlight, exist to illuminate an injustice. Other films, like United 93, are made to create an intense emotional reaction, to imagine ourselves in an unimaginable situation. Still other films, like The Shawshank Redemption, are inspirational fodder, designed to make us feel that we can overcome adversity just like the hero. That’s great, there’s a place for seriousness and art in cinema.

But sometimes, seriousness won’t do. Sometimes we want fun, and fun in the form of massive ultraviolence. We’ll give a pass to sophisticated narrative or subtle performances in order to see something cool. That’s why Jason Statham’s gonzo thrill ride Crank is still viewed fondly, or why we don’t sweat the simple story of The Raid because we want to see wall-to-wall action. Hardcore Henry is a worthy exploitation flick in its own right, and it’s also a highly impressive technical achievement.

First, let’s talk about what we laughingly refer to as the “plot.” Our hero, Henry, awakens in a mysterious lab. His memory has been erased, along with his voice. Somehow, he has gotten himself all jacked up, with an arm and a leg missing. Conveniently, his wife Estelle (Haley Bennett) is also a brilliant scientist, and she attaches a bionic arm and leg to him. It’s all very confusing, and it gets more confusing when scads of armed men break into the joint, led by the evil albino telekinetic Akan (Danila Kozlovsky). Yes, you read that right. Hardcore Henry has no need for puny concepts like “believability” or “reality.”

Henry escapes, but his lady love is captured, natch. He explores the streets of Moscow in search of her and is aided by the mysterious Jimmy (Sharlto Copley), a man with a distressing habit of changing appearances and personalities, and an even more distressing habit of being killed repeatedly. Mostly, Henry kills hundreds of people along the way. There are shootings, stabbings, pummelings, maulings, defenestrations*, explosions, eviscerations, and what the hell, let’s throw in an electrocution.

There’s also a musical number. I’ll wait while you compose yourself.

It sounds like a B-grade action flick, based on that description. But there’s a mad genius at work here. The film was made nearly entirely with GoPro cameras and custom-built rigs, creating a first-person perspective for the entire film. While other movies like Strange Days and Doom have had POV sequences, and 2009’s Enter the Void was a feature told entirely from that viewpoint, Hardcore Henry is the first action film done in this style.

But why is this movie more than just a gimmick? Consider this. As is, stunt work is complicated, tricky, and downright dangerous. Sometimes a stunt looks great from one angle, but it plays poorly from another. Directors will often have multiple camera setups ready just to be on the safe side. This film, on the other hand, had no such luxury. Director Ilya Naishuller is responsible, numerous times, for getting a camera angle just so. Within that shot, a highly choreographed stunt or action sequence must take place. Along with that, Naishuller makes sure that these scenes are edited together strongly to create pacing that’s absolutely relentless. Simply put, this is next-level filmmaking. The most astonishing part is that Hardcore Henry is Naishuller’s first feature film.

With two exceptions, the cast ranges from dull to terrible. Danila Kozlovsky’s villain is sneering Eurotrash, nothing we haven’t seen a thousand times before. As Henry’s wife, Haley Bennett is…fine? I guess? Most of the cast are like that. Our old pal Tim Roth shows up briefly as Henry’s dad, and he’s a pro that can class up a disreputable affair like this. Sharlto Copley, though, walks away with the movie. He doesn’t chew the scenery, he gleefully devours yards of it. Yes, his performance has no emotional range. Yes, he delivers line readings that are…well, let’s just call them “berserk.” But ever since District 9, Copley has shown us that he’s a character actor who is unpredictable and exciting. As Jimmy, if nothing else, he’s entertaining.

The weak point of the film is the script by Naishuller and Will Stewart. It’s not much of a story, and it’s got all the depth of an installment of Call of Duty. But given that I viewed the vast majority of this flick with a big, stupid grin on my face, I’d say the lizard brain part of me won out. Hardcore Henry is dumb fun, but it’s dumb fun done well.

Finally, a warning. If you’re someone prone to motion sickness, or you can’t handle the shaky-cam aesthetic of directors like Paul Greengrass, this might be a tough sit for you. What you want to do is get a seat in the theater that’s located from the middle to the back wall. If you do that, you should be fine. If you opt to sit in the front row, you might consider bringing a bucket.

*I don’t mean the swift dismissal of someone from a political office, but that would have been fun, too.

Tim Brennan
Tim has been alarmingly enthusiastic about movies ever since childhood. He grew up in Boulder and, foolishly, left Colorado to study Communications in Washington State. Making matters worse, he moved to Connecticut after meeting his too-good-for-him wife. Drawn by the Rockies and a mild climate, he triumphantly returned and settled down back in Boulder County. He's written numerous screenplays, loves hiking, and embarrassed himself in front of Samuel L. Jackson. True story.
See More Articles From Tim Brennan
Tagged: danila kozlovskyhaley bennettilya naishullersharlto copleytim rothwill stewart
Boulder Colorado Air Quality