The Week That Was: A Full Week of Sports in 600 Words 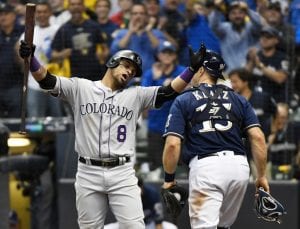 One of the difficulties of trying to write a weekly Colorado sports article is focusing on the biggest story of the week, and timing it within the deadline provided.  Follow that up with the challenge of informing and entertaining the reader in 600 words or less, and the problem becomes compounded.  Within the last ten days the Colorado Rockies had a playoff series, the Denver Broncos played twice, the CU Buffs traveled to USC, the Colorado Avalanche were five games into the start of the hockey season, while the Denver Nuggets were just hours from their NBA opener.

And that’s just Colorado!  Throw in the Yankees versus Boston, Mahomes versus Brady, Georgia versus LSU, McGregor vs Khabib, our Fantasy Football teams, and everything else, and where does one even begin?

Fortunately, in the world of social media and millennials, where 600 words is like a Tolstoy novel, I’ve decided to cover all of it, so we can all get back to the important stuff, like texting, and Fortnite.

Alan Tapley
Alan Tapley is an educator, author, and blogger who has lived just outside of Boulder for the last twenty years.  His published work includes two novels, two children’s books, a series of cartoons in the Minneapolis Star-Tribune, and multiple sports related articles. His love for family and the state of Colorado is only matched by one thing, his passion for sports.  The first baseball game he ever attended was at Wrigley Field, before there were lights.  At the final Bronco game at the old Mile High, he allegedly cut out a piece of his seat in the South stands.  But regardless of being here for the Avalanche’s last Stanley Cup, the Rockies only World Series appearance, and all the Broncos’ Super Bowl Victories, his wife never fails to remind him that he wasn’t at the University of Colorado in 1990, like she was.  The year the Buffs football team won the National Championship
See More Articles From Alan Tapley
Tagged: #NebraskaAir ForceColorado AvalancheColorado BuffaloesColorado RapidsColorado RockiesConnor McGregorCSUDenver BroncosDenver NuggetsKyle FreelandLaviska Shenault Jr.Nate MacKinnonNolan ArenadoTodd GurleyUCLAUSC
Boulder Colorado Air Quality