Colorado’s reputation as a confluence of health and recreation is well established. We’re known for our ski resorts, biking, and every athletic activity in-between. Anyone can challenge or simply enjoy themselves throughout the mountains, Western Slope, and Front Range.

The history of this is long, to say the least. But perhaps the most important chapter, in terms of impact, came in the late 19th and early 20th centuries. Tuberculosis was the leading cause of death at that time, and effective antibiotics wouldn’t come until the 1940s. Failing other options, many doctors prescribed the sun, clean air, and low humidity of Colorado, so much so that the state became unofficially known as the “World’s Sanatorium.”

Simultaneous to that was an obsession with the restorative—and restful— qualities of natural springs. Many cities were founded on that basis; see Glenwood Springs, Colorado Springs, Manitou Springs, and, closer to Boulder, Eldorado Springs.

Originally owned by the Union Pacific Railroad Company, 480 acres of land in and around Eldorado Canyon were purchased by George H. Taylor, and promptly resold to some of Taylor’s men and their partner, Frank Fowler, in 1904. On July 4th of the next year, Eldorado Springs Resort officially opened to the public. 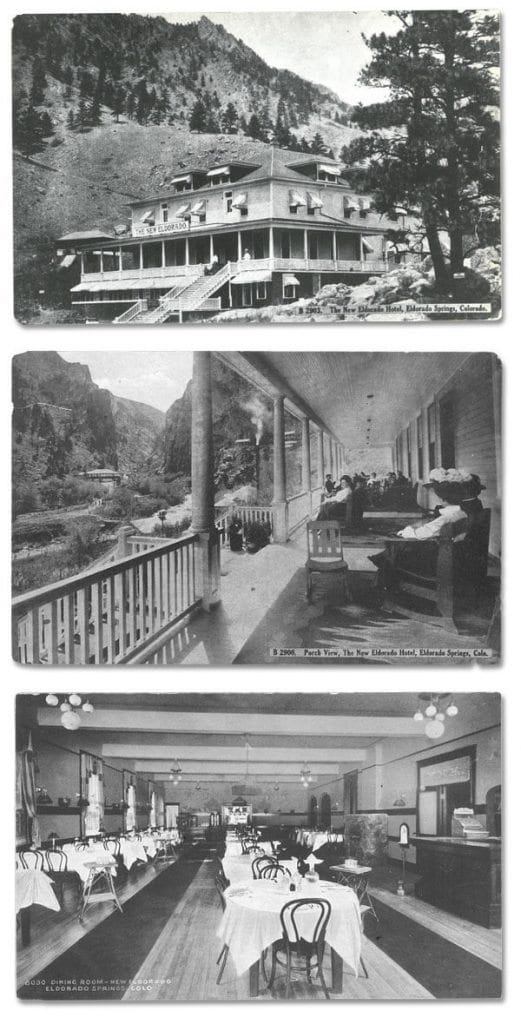 The goal, it seems, was to combine much of what Colorado was known for. Though not as serious-minded as Front Range sanatoriums the natural spring, as well as the location itself, was lauded for its purity and restorative properties. What Eldorado Springs Resort truly excelled at, however, was having a good time.

Two spring-fed pools were constructed in the first year, 1905, and were an immediate hit. A third was completed in 1906, advertised as the largest swimming pool in the country. With its distinctive mish-mash of mission and Southwest architecture, it is the same pool still enjoyed today.

The resort’s popularity grew, visitors arriving mostly on horseback. Then, in 1907, the interurban rail line was completed, connecting Denver with Eldorado Springs. That same year Ivy Baldwin, well known as a hot air balloonist, joined in. His most popular feat was walking a tightrope across the canyon—nearly 700 feet in length, at a height of between 400 and 582 feet above the ground, depending on whom you believe—and involved stopping for a bow in the middle of the span. Baldwin’s performances helped attendance skyrocket, to the tune of an estimated 40,000 daily visitors—most arriving by rail, some by horse, and more than a few by motorcars, just beginning to take hold in the U.S. 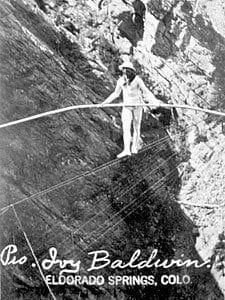 Eldorado Springs Resort’s popularity led to being dubbed the “Coney Island of the West.” And like that Brooklyn namesake, an array of fun was on-offer. At its peak there were three pools, two dance halls/ ballrooms, a roller skating rink, an ice skating rink, horse stables, fishing, some hiking trails, and a full-fledged Midway featuring carnival games popular at the time.

For those interested in more than a daytrip, tents, dormitories, and private cottages were available to rent. Three hotels—The Grandview, The Crags, and the luxurious New Eldorado—were built to draw well-heeled vacationers. Then-heavyweight boxing champ Jack Dempsey was a regular; actors such as Douglas Fairbanks, Mary Pickford, and W.C. Fields left their marks. In 1916, Dwight and Mamie Eisenhower honeymooned in one of the cottages, and became repeat summertime visitors thereafter.

As is all too familiar today, though, Colorado’s capricious nature took its toll in subsequent years. In the period between 1929 and 1938, much of the resort—except the existent pool—was destroyed by a series of fires and floods. Potential costs and shaky financial footing of would-be visitors conspired to make rebuilding a losing proposition, and the resort never recovered.

To make good use of his family’s land, Jack Fowler began bottling and selling water from Eldorado Springs in 1942, its purity the main selling point. In the 1950s, devotees of technical rock climbing—a relatively new recreational activity—first ascended the striking sandstone outcroppings of the canyon. Those two factors, it turned out, were key to the future. Eldorado Springs Water is still in business, sold countrywide. Beginning in the 1960s, Eldorado Canyon became known as a mecca for climbing; today, roughly 1000 climbing routes exist within a half-square mile, many of which are famous the world over.

In 1978, Colorado purchased the former resort land, establishing Eldorado Canyon State Park. And so, as it had from the beginning, the area again exemplified our state’s relationship to the outdoors and recreation. Land turned into a resort, destroyed by the nature it relied on, tapped for wide distribution, and eventually protected as a State Park, is a familiar lifecycle in Colorado. So the next time you pick up a bottle of Eldorado Springs water, scurry across a challenging rock face, or take a relaxing dip in the pool, remember that you have something in common with presidents and Golden Age actors. Though no one thinks of Eldo Canyon as the “Coney Island of the West” anymore, it nonetheless remains a perennial reflection of what we hold dear as Coloradans.