Home › Blog › The ULTIMATE Guide to Sledding in Boulder

The ULTIMATE Guide to Sledding in Boulder

There’s something intensely satisfying about speeding down a snowy hill on a piece of oversized plastic. You call up your friends, scavenge some sleds from the garage, encase yourself in snow clothes, and embark on your journey towards an incredible sledding hill. Sometimes, however, it’s hard to find the right sledding hill. Much like Goldilocks in The Story of Three Bears, certain sledding hills are too short. Or maybe they’re not steep enough. Maybe they’re even too steep. That’s why I’ve organized a list of the very best sledding hills of Boulder, where each hill is rated akin to the ski run difficulty scale.

For those unfamiliar with the scale, here’s a key:

This park is a two-in-one kind of sledding hill. It’s a large bowl, where one slope faces north and the other side faces south (see image above), and each face is perfectly suited for sledders. It’s one of the smaller sledding areas in Boulder and doesn’t have a large standing area at the top of the bowl, but it’s certainly a good option for those looking for a basic sledding hill.

Scott Carpenter Park has one of Boulder‘s largest sledding congregations on snowy days, partially because it’s almost directly in the center of Boulder.  This may also partially be because it’s such a great sledding hill. Its slope is gentle enough for smaller kids, but it’s also substantial enough for those seeking excitement. Scott Carpenter Park can be found at the corner of Arapahoe and 30th Street. Tantra Park is one of the largest hills in Boulder. It’s longer than a football field, more than sixty feet wide, and the hill is at a nearly perfect slope. It’s a local favorite area for beginner snowboarders, who use the area quite often during the snowy season. The only thing that warrants a little bit of a safety concern is the bottom, which doesn’t have a lot of space to slow down before the hill extends into property fencing. Tantra Park can be found by going from Table Mesa to Tantra Drive, and then taking a right on W Moorhead Circle.

Chautauqua’s sledding hill is a touch on the difficult side. It’s fairly steep, involves some bushes and twigs, and there’s a small hike involved with getting to it. However, the risk is worth the reward. This hill provides some serious thrill for sledders looking for a bigger hill, and its unpredictable terrain adds provides a rugged quality to the area. If you’re worried that it’s too off the beaten path, there’s no need to fret, because this area was been broken in by many winter enthusiasts long ago. From 1949 to 1952, this hill actually had a rope tow, and it was even re-introduced in 1962 and 1963. Unfortunately, Boulder currently has no plans to revive the rope tow for a third time. Chautauqua Park can be accessed off Baseline, and the hill itself can be found just west of the Meadow Trail. 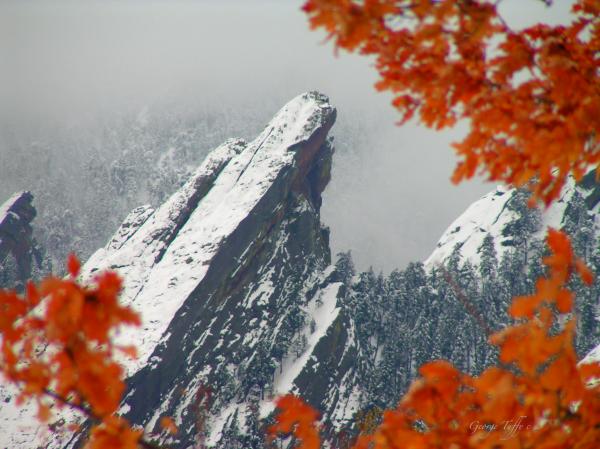 Actually, sledding down the flatirons is a really bad idea. Don’t do that.

Essentially, Boulder has a lot of incredible sledding hills and there’s currently a lot of snow on the ground. Those are just the facts. I’m not telling you how to spend your time, but if you asked, I would probably tell you to go sledding.