At this point, I realize it’s rather passé, but I just have to talk about this month’s unusual weather one more time. Notably, the daily gloomy forecasts remind me very vividly of my time spent in the city of Amsterdam. As a young and impressionable collegian, I can’t imagine a better crash course in beer culture. Every day would greet us with thick fog, the occasional drizzle, only to be replaced with an onslaught of rain and grumpy attitudes. So, along with some of the other Americans on my study abroad semester, decided to seek out Amsterdam’s best bar for beer. While most of the time we found ourselves at a place that sold Heineken or Grolsch, it didn’t take us long to stumble upon Amsterdam’s best kept beer secret: Cafe Gollem. Suddenly, at least in my limited beer knowledge, beer wasn’t just pale, watery, and plain (that’s not to say I won’t still enjoy a Heineken if the mood is right). Suddenly, my world was filled with snifters of various sizes, brews ranging from straw yellow to black, and flavors that I never knew could exist in an alcoholic beverage. Pauwel Kwak, Cuvee du Chateau, St. Bernardus Abt., La Chouffe — beers I had no idea how to pronounce or properly enjoy. I had to go back maybe two times a week, because I found no greater joy than sitting by Gollem’s dark windows, sipping a high gravity brew, and watch the rain pour down.

What I didn’t know at the time was that I had inadvertently stumbled upon the rich and timeless tradition of Belgian beer. Though being just north of Belgium, The Netherlands has a rather limited supply of the good stuff from Belgium. A law actually prevented Belgian beer from being imported into Holland for many years, only to be overturned in the late 1970s. I guess they realized that such a law is ridiculous, and could be considered torture to the beer lovers of the Lowlands. Indeed, there is no place on earth with such distinctive, experimental, and sometimes crazy beer 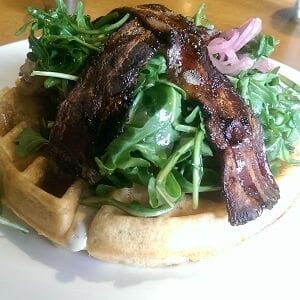 than Belgium. In Belgium, many times, beer is literally a religious activity. Monks from isolated monasteries across Belgium’s lush landscape perfected their techniques for producing mind-bending high-proof beer. With much respect to that tradition comes West Flanders Brewing Company, conveniently located right on the Pearl Street Mall (where that BJ’s used to be). While their name, their decor, and their beers are all certainly paying homage to Belgian beer masterpieces, the brewery also brings a distinctly American approach to their brew. You won’t find very many session IPAs available in Belgium, for example, but West Flanders has you covered.

The location, billing itself a “Gastro Brewery” is yet another creation from Mark and Chris Heinritz, who made their name in this town from owning and operating The Sink — you know, the one where Barack Obama came and dined during his campaign in 2012? West Flanders Brewing Company is then referred to as Mark and Chris’s passion project. It’s a lovely three story building, with a perfect location for people watching. This is another one of those breweries that pays a heavy emphasis on their elevated food menu. While you can indeed get a burger and fries here, why not get the muscles and frites, which might as well be Belgium’s national food. For me personally, I stopped in during their notorious brunch service. While the $2 mimosas were definitely tempting, I felt like I needed to give their beers a shot, since that’s like, you know, my job. In the spirit of combining Belgian tradition with American innovation, I opted for the chicken and Belgian waffle. Waffle, gravy, fried chicken, greens, onions, green apples, maple bacon, maple syrup. My goodness. What a masterpiece. Will the beer follow suit? Let’s get it in!

As an example of a definitively non-Belgian beer, I started off with the Wild Citra, which is billed as the brewery’s “session IPA.” So, when something is called this, I’m always a little wary. Many times 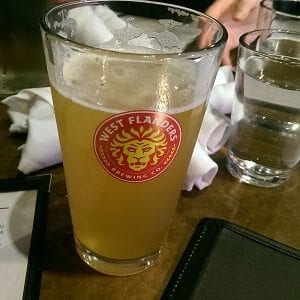 IPAs will sacrifice a lot of body and flavor to get to sessionable gravity. However, this one came out to me in a full pint, a pale amber color, with a foamy white head. On the nose, the inclusion of citra hops is incredibly apparent, giving off an orange and vaguely lemon scent. The first sip was nice; a combination of orange, bitter, and herbs (maybe basil? What does basil even taste like?) filled my mouth. For a session beer with such low ABV, I’m surprised how heavy this beer turned out to be. I would say this, for me, was pretty middle of the road when it comes to IPAs in Boulder. Yes, it has a pretty clean and dry finish. Yes, the flavors are all decidedly balanced. Is the best IPA that I’ve had in town? I don’t think so, but as a starter beer, while waiting for my chicken and waffles, I’d say it hit the spot. Because honestly: who wants to drink something too boozy at 10:00AM? Oh right: that’s what brunch is all about.

Seeing this beer on the menu, it’d be difficult not to order it, in fond remembrance of the few days I spent exploring Trappist ale in and around Gent and Bruges in Belgium. This one is billed as an 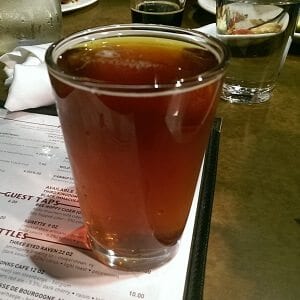 Abbey Ale, which is a very vague term for beers brewed in the monastic style in Belgium. A few things about this beer. First of all, I only ordered a half pour, which came out with literally zero head (the picture to the right is what it looked like immediately after it being served to me. At first, I just assumed a rushed bartender let that one happen, or a busy brunch rush led to my beer being poured and then not delivered. As a boy who has been inundated with the restaurant industry for my entire life, this doesn’t bother me. However, sipping the beer, I realized the lack of foam was due mostly to a very, very mild carbonation. Perhaps that was intentional, but the beer tasted almost flat to me. The taste is decent; it’s a strong mix of banana candy, common in beers employing Belgian yeast strains, cloves, and maybe honey. There is a very slight carmelly flavor as well, but to me, this one is dominated by the fruity sweetness that often comes with Belgian beers, and a very aggressive boozy flavor that permeated throughout the entire sip. It was a bit too much for me. I mean, I don’t get angry at beer anymore, but if I were a Belgian monk, and this is what I created after years of careful cultivation, I’d angrily retreat back to my library for more research.

Not wanting to leave the brewery without getting a Belgian beer that I officially enjoyed, I opted in for the stronger tripel, The Trippel Lutz. This one is named after brewmaster Brian Lutz, who discovered the wonders of Trappist beer in his teens traveling around Germany (another spot for 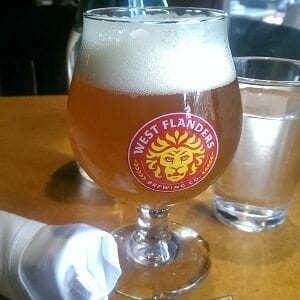 delicious monastic brews). A tripel is a Trappist-style ale that is strong. This designation came from the Westmalle brewery in Flanders in the 1950s, to denote the strongest beer that they produce. This one is hazy, pale, and gold. On the nose, once again, there’s a strong smell of banana candy and booze, which is mostly to be expected with a Belgian tripel. However, the flavor is nothing short of magnificent. A rich and delicious blend of apricot, orange, strawberry, and banana combines seamlessly with the slightest hint of roasted nuts. It’s boozy, yes, but it’s a very delightful balance of strong flavors. I wouldn’t say any flavors really drown out any others. Like most Belgians, this one is not hop-forward at all, though there is a familiar bite of bitterness in the aftertaste. If you’re curious what a great Belgian beer is supposed to taste like, but you also are interested in a beer that’s locally brewed (rather than paying a premium for getting one in a bottle from across the pond), check this one out. While it is pretty high alcohol, it won’t slow you down all that much, so long as you show restraint and discipline, just like any good student at a monastery.

West Flanders is a great place to see The Pearl Street Mall in action. If our terrible weather ever decides to recede, the patio would be my first choice. Not only will you be treated to some quality beer, you’ll also get some quality people watching, and some quality eats (I will have fantasies about that chicken and waffle dish for a long time now).

So, I’m trying this new thing, on the advice of my roommate. If you ever want to see what I’m drinking, or if you’d like to have a beer with me, check me out on Untappd. We can be beer buddies, or something like that. I always like to share beer wisdom with people who are passionate in the brew industry. The username is “LordMaxington”, but I’m sure you can just find me by using my name as well. Stay thirsty!