Who Would Win In A Fight?

The Rocky Mountain Showdown has notoriously brought out the worst (or best) of the rivalry between CU and CSU. Each year, the Rams and Buffs compete not only on the field but off the field, too. Students wear their schools gear, talk mad sh** to each other, and pray that their team wins. This year, the CSU mascot Cam the Ram died before making it to Sports Authority Field. Some think that his death was a bad omen, causing the Ram’s to lose the game, while others believe that Cam sacrificed himself for the sins of the CSU kicker. Either way though, the Buffs came out on top this year.

The only question remaining – and a long, unanswered one with that: Who would win in a fight, a buffalo or a ram? It seems obvious that a Buffalo would win, although I may be biased. Ralphie is actually a bison, not a buffalo, which means that she weighs about 1,000 pounds. A ram on the other hand, weighs up to only 300 pounds on average. 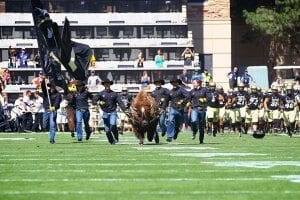 Ralphie leading the CU Football onto the field 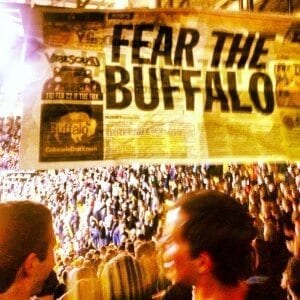