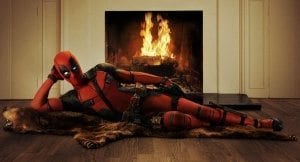 Let’s say there’s this punk rock band. They’re not what you would call musically accomplished. Matter of fact, we have to wonder if they can even read music. All of their songs are short, probably two minutes or less. They don’t seem like much, truth be told.

But we decide to check out their set, in some dirtbag club. We give them a shot, and it turns out to be a good call. Because despite being profane, juvenile, and simple, they’re great. Wildly entertaining. Huge energy. Fun as hell. Congratulations, we just saw Black Flag. The Dead Kennedys. The Sex Pistols. All bands that were sneered at and derided, but occupy a very particular place in music. A place that matters, because they took huge chances.

If punk rock was a superhero, it would be Deadpool.

There’s a chance that when you read the word “superhero” a couple of seconds ago, you had an involuntary reaction. You sighed audibly. Rolled your eyes. Cursed the decline of civilization. You’re suffering from Superhero Fatigue, and it’s understandable. But trust me when I tell you that Deadpool is both a generic example of the genre and also unlike just about any comic book movie you’ve ever seen.

Wade Wilson (Ryan Reynolds) is a lowlife mercenary. He’s a former Special Forces operative who has decided to embrace the purest version of capitalism, that is, by killing people for money. His buddy Weasel (T.J. Miller) is a bartender at the merc club where Wade gets his assignments. Things are good. Then Wade meets Vanessa (Morena Baccarin), a hooker with a heart of gold.* They click, big time. Wade tells her, “Your crazy matches my crazy.” which is one of the better explanations of love I’ve heard.

So things are good in the hood for these two crazy kids, until they aren’t. Wade is diagnosed with late-stage cancer, a death sentence. He does what many of us would do in a situation like that, which is to volunteer for sadistic experiments by a mysterious organization. The experiments might save Wade’s life. Besides, the man in charge, Ajax (Ed Skrein), sure seems like he knows what he’s doing. Thing is, along with his partner Angel Dust (Gina Carano), Ajax is running a scam on poor schmoes like Wade. He’s unlocking the latent mutant genes of the volunteers, then brainwashing them to serve as super-powered muscle. For Wade, things go very wrong.** He gains an accelerated healing factor, giving him enhanced regeneration, but becomes horribly disfigured.

Wade continues to do what most of us would do in a situation like that, which is to go hopelessly insane and seek bloody vengeance against his tormentors. Along the way, he encounters two members of the mutant group of heroes, the X-Men, who try convincing Wade to realize his potential as a hero. There’s Colossus (A motion-captured performance, with Stefan Kapicic providing the voice),  a friendly Russian with the ability to transform his body into organic steel. His trainee is Negasonic Teenage Warhead (Brianna Hildebrand), a surly teen with energy powers. Wade also gets a roommate, Blind Al (Leslie Uggams), a very odd elderly woman.

Created back in the 1990’s for Marvel Comics by Fabian Nicieza and Rob Liefeld, Deadpool has evolved into one of the company’s most popular characters. He’s a walking Looney Tunes character, but one that routinely slaughters people and is relentlessly meta. Deadpool is the only comic book character that understands he’s a fictional creation, and constantly comments on the action and tropes going on around him. Filmgoers first saw him in 2009 in the abominably bad X-Men Origins: Wolverine. It’s a movie so thickheaded that the motormouthed Deadpool inexplicably has his lips sewn shut.

But Reynolds, along with screenwriters Rhett Reese and Paul Wernick, and first-time director Tim Miller, created a 3-minute test reel in 2012. It was meant to give 20th Century Fox studio heads an idea of what a Deadpool movie could truly be. Naturally, the studio passed. But in 2014, the same footage was leaked online. Fans were overjoyed and Fox reluctantly greenlit the project.

The plot of Deadpool is ridiculously, almost idiotically generic. Ed Skrein’s Ajax is evil and British, and his diabolical plan is entirely uninteresting. As henchwoman Angel Dust, Gina Carano continues to prove she has all the charisma of office furniture. There are scenes of Wade moping over his bad fortune. His girlfriend is kidnapped, obviously.

But there’s a weird kind of genius on the part of the filmmakers. They’ve taken that paint-by-numbers plot and overlaid it with an absolute blizzard of jokes, meta-commentary, and good-natured filth.*** Deadpool breaks the fourth wall and talks to the audience, commenting on not only the movie itself but other superhero movies. There are background gags aplenty, more pop cultural references than you can shake a Kardashian at, and a sex montage that, in its own puerile way, manages to be genuinely progressive.

Not since the original Iron Man have I seen a film that survives on the strength of a single performance. Our pal Ryan Reynolds has had terrible luck with superhero movies. First with X-Men Origins, and then with 2011’s awful Green Lantern, a movie about space cops that is mostly set on Earth. None of that is Reynolds’ fault, but he’s got something to prove to audiences and himself. Here, he delivers one of those rare performances full of energy and charm that can elevate a movie singlehandedly. Remember the first time you saw Johnny Depp as Captain Jack Sparrow, how he gave a gloriously weird performance that seemed to have been ported over from another dimension? Reynolds’ depiction is at the same level.

Deadpool is a lot like Jason Statham’s cartoonishly violent Crank, a film that runs on its own crazy-ass wavelength. There is no middle ground with this movie, for the middle ground has been thoroughly set on fire. Those who dislike it will absolutely loathe it. Those who like it will fight a duel to defend its honor. I thoroughly enjoyed it, but you want to really impress me? A movie throwing shade at comic book heroes will work just once. Next time, Reynolds and his worthy collaborators will have to take a real risk, and create something unique. I believe they can do it.

*That’s Cliche Number One. There will be more.

**I desperately want a scene in these movies where the risky scientific experiment works perfectly, then all the lab techs high five. “Good job, team! Pizza’s on me!”

***If you’re a parent, do not, under any circumstances, take your kid to this flick. Being that the film is a hard R rating, it is 100% inappropriate for them. Don’t be a jackass, just get a babysitter for the night.

Tim Brennan
Tim has been alarmingly enthusiastic about movies ever since childhood. He grew up in Boulder and, foolishly, left Colorado to study Communications in Washington State. Making matters worse, he moved to Connecticut after meeting his too-good-for-him wife. Drawn by the Rockies and a mild climate, he triumphantly returned and settled down back in Boulder County. He's written numerous screenplays, loves hiking, and embarrassed himself in front of Samuel L. Jackson. True story.
See More Articles From Tim Brennan
Tagged: brianna hildebranddeadpooled skreingina caranoleslie uggamsmorena baccarinpaul wernickrhett reeseryan reynoldsstefan kapicict.j. millertim miller