With the recent opening of Ink! Coffee on Larimer and 28th, Denver’s River North Art District (RiNo) continues its food and coffee supremacy. RiNo, which is technically a part of the Five Points neighborhood, is already a nationally recognized food hub. The new location from the Aspen-based Ink!—one of Colorado’s biggest coffee chains—will most likely only fuel RiNo’s status as a popular culinary center.

Ink! will be competing with two other coffee shops on Larimer Street—Huckleberry and Crema. On nearby Brighton Boulevard, coffee lovers will find two other options: Wystone’s at Industry and Boxcar at The Source, both located in renovated warehouse spaces. Several blocks east on the historic Welton Street, coffee drinkers can hit up The Purple Door or Coffee at the Point. Once considered a desolate and unsafe part of the Denver, Five Points is experiencing a revival thanks partly to the recent surge in new dining establishments.

These new restaurants and coffee shops are not the only reason the historic Five Points is experiencing this resurgence. While RiNo has situated itself as a major art and food business center, the greater Five Points area has its own residential appeal. With its relatively low housing prices, beautiful Victorian homes, close proximity to downtown, and many public transit options (including the D-Line light rail), Five Points is now a desirable residential neighborhood for those seeking an affordable home in Denver. The incoming residents of Five Points will find that they have a plethora of coffee choices in the neighborhood.

For many of the current and former residents, the new coffee and dining establishments are not the most exciting developments. Traditionally home to Denver’s African American minority, Five Points was referred to as “the Harlem of the West.” With a vibrant jazz scene throughout the 1930s and ‘40s, the neighborhood had many lively clubs and bars. In the later half of the 20th Century, Five Points began to decline as many prominent Black residents and business owners vacated the neighborhood. While the demographics have changed over the decades, the neighborhood is still home to some Black working class residents. Unfortunately, it’s this diminishing community that does not appear to be benefiting from the new developments. 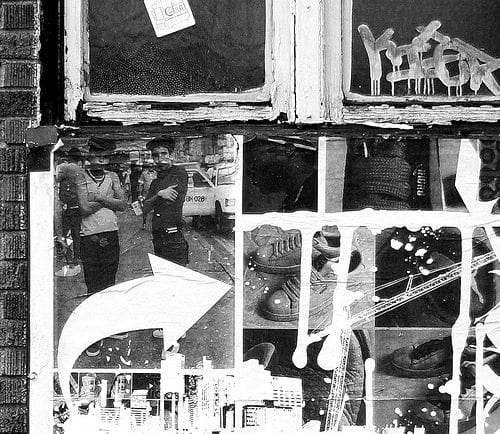 While the development of RiNo has a seemingly less controversial narrative—an industrial strip turned into a trendy retail and dining spot—the greater area of Five Points is dealing with the dilemma of gentrification. As new businesses on Welton and in RiNo attract more outside investors, the remaining Black community in Five Points is likely to find themselves priced out of their own neighborhood. While there are new condos in RiNo and real estate prices are slowly on the rise all over Five Points, the area’s gentrification is currently and significantly tied to the increase in food retailers. Five Points is where Denver’s growing foodie culture intersects with the greater issue of gentrification. The evolution of RiNo and the revival of Five Points seem to be a luxury for the relatively new and predominantly White middle class investors, residents, and visitors

The small business owners investing in Five Points rightly see a good opportunity to set up shop in a neighborhood with a lot of growth potential. Some probably even hope to be a positive force in a diverse community. The real hope is that business owners and City developers can work with community members to create a neighborhood that prospers for all rather than merely some. It’s an idealistic goal but it doesn’t seem completely unrealistic, given the emergence of the Five Points Business District. Formed in 2009, the FPBD covers the 10-blocks of Welton that are north of downtown, leading to the neighborhood of Whittier. The project aims to attract businesses that are beneficial for all residents, while also promoting the neighborhood’s rich artistic and cultural history as a tourist destination.

Still, it’s going to take more than a ten block-project to control the fate of this area’s future. The rebranding of RiNo as its own hip neighborhood will affect the rest of Five Points as more people will want to invest and live near the booming retail strips on Larimer and Brighton. Maybe if the Five Points Business District and the River North Art District worked together then we’d see a more inclusive change in the area as a whole, but it seems that they are working as separate entities with different aims. Even if we don’t consider them one connected area, through proximity alone it’s safe to say that RiNo’s expansion will continue altering Five Points.

Five Points is an example of how food accessibility changes as race and class demographics shift. As more middle class residents move to the neighborhood, the more attractive it becomes for food retailers. It seems it’d be more beneficial for all residents if this food shift manifested itself in more grocery stores and locally owned shops but currently that’s not the trend. Instead of affordable and healthy general foods or produce, Five Points is seeing an increase in access to specialty good eats. While not incredibly expensive nor intentionally exclusive, the new food retailers are appealing to middle/upper middle class foodies.

It takes more than an appetite to invest in contemporary food culture and it’s truly a luxury for most to spend money on artisanal eats. Third wave coffee in particular takes a lot of extra time and money to care about and enjoy, which is why it’s not a high priority for financially struggling individuals (regardless of their race). In my experience, the third wave coffee scene has always catered to a majority middle/upper middle class cliental (who are often White).

The coffee shop growth in Five Points/RiNo is just one small part of the retail business-driven gentrification of the neighborhood. But it’s still a noteworthy aspect for the socially minded coffee lover and urban dweller.