The Problem with Pickleball 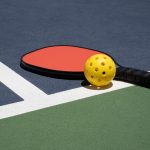 Late last summer, following the fast-growing trend, my gym made the decision to convert the entirety of its rooftop tennis courts into Pickleball courts. I get it. Pickleball is low-impact and all-inclusive. I see husbands and wives playing, the coordinated and the not-so-coordinated playing, the fit and not-quite-as fit, and plenty of elderly. Sometimes all on the same court! Gyms are now considered Judge Free Zones – so I accepted the change, tried not to judge, and moved on. A few months later, the gym continued its deconstruction by converting the indoor basketball court into permanent Pickleball... Read More

The Olympics – And Should Beer Pong be the Next Sport?

This year’s Olympic Games will introduce us to events such as Skateboarding, Rugby Sevens, and 3X Basketball.  There will be canoeing, sailing, and BMX Freestyle.  A gold will be won in Sport Climbing, a silver will be earned in karate, and someone is bound to be injured while participating in Trampoline Gymnastics. As the teams and their flag bearers circled the empty stadium in Japan last Friday two things were apparent.  The bear-chested flag-bearer from Tonga needs to lighten up on the baby oil, and those uniforms from Australia make me want to order two boxes of Thin Mints, one box of... Read More