Colorado fans may think it’s a little early to post a headline like this with the Rockies just two games in front of the Milwaukee Brewers in the fight for the final playoff spot. Call it irresponsible journalism, or sensationalism to attract readers, but with twelve games to decide the wildcard, here are six reasons that fans can stop chewing their nails, and start popping champagne. 1) While it doesn’t look great that the Rockies end the season with six games on the road and three at home against the first-place Los Angeles Dodgers, the schedule does include the San Francisco Giants, San... Read More 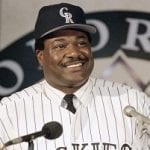 Former baseball great Don Baylor passed away on August 7, 2017 after a lengthy battle with cancer. Baylor was best known to Rockies fans as the first manager in the franchise’s history as he led Colorado to the playoffs in 1995, and was named the NL Manager of the Year. As a teenager I was fortunate enough to see Baylor close up and personal in a locker room following an Angels game many years ago. Baylor was a mountain of a man, literally and figuratively. With quads and arms the size of tree trunks, Baylor would crowd the plate and dare a pitcher to throw inside, and throw inside they... Read More

Five Moves to Make Before the Trade Deadline

The Colorado Rockies don’t seem overly concerned about the July 31st trade deadline, and with a record of 58-43 and a comfortable position for the wildcard spot, playing .500 ball the rest of the way should be enough to secure their first playoff appearance since 2009. With such a young team, and bright future, it’s understandable that the Rockies will employ baseball’s version of the prevent defense and take their chances with their current roster. But as they say, prevent defense often prevents you from winning. Here are five moves that the Rockies should make before the week is over. 1) Go... Read More