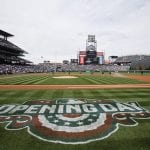 Warm weather in April as spectators clammer to their seats.  The sound of laughter echoing off the brick walls of Coors Field.  Thousands of fans singing in unison as Charlie Blackmon strolls to the plate.  Cold beer.  Hot dogs. And losing three-out-of-four to the Los Angeles Dodgers. Baseball is back!  And here are some of the highlights of the opening weekend.   Nolan Arenado was traded to the St. Louis Cardinals and subsequently replaced at third base on Opening Day by his cousin, Josh Fuentes. In other news, the Albuquerque Isotopes, a Colorado Rockies minor league affiliate, signed... Read More