Thou Protest Too Much 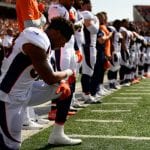 Last week the NFL owners approved a national anthem policy that would require all players to stand and show respect for the flag.  The policy, which was passed without discussion from the NFL Players Association, would allow players to stay in the locker room during the playing of the anthem if they wished not to participate.  Whether the move was a response to lower ratings based on the taking-a- knee protests, political pressure from fans and the Trump administration, or simply a poorly constructed compromise, the ball is now in the players court.  First Amendment rights aside, if the players... Read More