Measuring the Moment, One Billionth at a Time – Boulder’s NIST 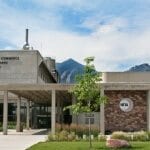 Ask someone exactly how long one second is, and you’re likely to get a smirk. If pressed, many might rely on the “one-Mississippi” trick from their hide-and-seek days. Others might claim an innate sense of it, as though they’re a minor—if punctual—X-Men style mutant. But, honestly, most would look at their smartphone. Ask the right scientist that question, though, and they’ll tell you with confidence: it’s a matter of 9,192,631,770. Boulder is home to NIST, which, among its distinctions, is the keeper of official civilian time in the United States. That moniker comes as a direct... Read More