Artist Spotlight: Michelle Ellsworth: Preparation for the Obsolescence of the Y Chromosome 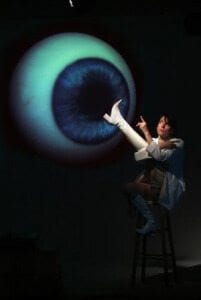 MediaLive is an annual week long festival of performances, workshops, and events from compelling artists and thinkers working internationally in new media brought to you by the Boulder Museum of Contemporary Art (BMoCA). Saturday evening, I got to watch one such artist perform and I’m thrilled to tell you about her.

Michelle Ellsworth teaches dance, theater, and interdisciplinary specialty courses that combine dance, theater, science, technology, music, and film at the University of Colorado at Boulder. She’s won a ton of awards and honors and was recently feature in the New York Times.

A friend explained Ellsworth’s work to me as, “she makes really cool things and then in her performances she tells you about the cool things she’s made.” Even with the coolness warning, I found myself unprepared for exactly how “cool” it would be.

The stage was set with several objects: a human sized spoon (not actually good for spooning, we’re told later), a rudimentary toilet with a mechanism that caused the seat to lift unexpectedly, some rubber man hands, a giant eyeball that followed Ellsworth as she moved on stage (representing the male gaze), and a projection of a website called preparationy.com (which catalogues all of Ellsworth’s unique creations for this project).

The second Ellsworth took the stage, it was impossible to deny her energy. She snapped her fingers repeatedly as if it were a cue that something important was about to happen. She began by telling us about an article that appeared in the New York Times in 2003 declaring that the Y chromosome was undergoing an evolutionary degradation that would eventually lead to its disappearance entirely. Later this science was expounded upon and revised, which was also incorporated into the performance.

Ellsworth identified herself onstage as a researcher, collecting “man specimens” to proactively prepare for the Y chromosome’s complete departure. Molds of man hands were taken (even as the performance was happening, which was a lot of fun to see). The toilet seat with the spontaneously raising lid was there to play on an old joke, but also, as Ellsworth put it, to remind her that life is chaotic and some things are out of our control. “I put this in my living room,” she said. I laughed every time she ran across the stage to close the lid.

There was another layer to the performance though, a personal one for Ellsworth. It was a sort of elegy for the death of her father. Like the lid always rising on the commode, or the strange practices of evolution, we can’t control the chaos of death. How do you prepare for something like the loss of a father? How do you talk about it with others? Though the performance felt light-hearted and funny, Ellsworth gave us something so much more than entertainment alone: she gave us permission to grieve for our losses in our own ways and to take as much time as we need because sometimes even our grieving processes need revision. And sometimes the revision process is long and arduous; sometimes it never ends. The performance ended with Ellsworth rerecording a video for her website addressing those who’d suffered a loss, but the video, it seems, will never be finished because there will never be a “right” thing to say.