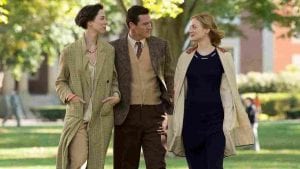 My dear friend Devila and I recently saw the new film Professor Marston and the Wonder Women. As the credits rolled, she joked that a Snopes meter should be prominently displayed on the screen, providing the audience with a running measurement of cinematic accuracy. While I would gladly donate money for the creation of a gadget like that, her comment got me thinking.

How much responsibility do filmmakers have to hard, cold reality when they’re making a biopic? In the end, how much does hewing to the truth really matter?

Consider a film like Braveheart. It’s a sprawling historical saga that truly is the ultimate Mel Gibson movie,* and if we’re going to be honest, the film is exceptionally well made. That is, until you start comparing the reality to the film itself. In terms of historical accuracy, about the only things Gibson got right is the inclusion of Scottish people, horses, and swords.**

If your primary interest is learning about the reality of an event, a place, or an individual, your best bet is to crack open a book or check out a documentary.*** Along similar lines, if fidelity toward the truth becomes a big hang-up for you, biopics, in general, might become a problem. So, to save you time, a great book about the real William Moulton Marston is Jill Lepore’s The Secret History of Wonder Woman. However, if you’re after a good story well-told that runs parallel to reality, you could do a hell of a lot worse than Professor Marston and the Wonder Women.

Having said that, the film features one of the most irritating cliches of the modern biopic, in which the subject of the film tells their story and the narrative jumps back and forth in time. Here, it’s the middle of the 1940’s and William Moulton Marston (Luke Evans) is in the midst of a hostile interview with Josette Frank (Connie Britton), the head of the Child Study Association of America. What could have raised her puritanical hackles? It turns out that Bill is the creator of comic book hero Wonder Woman. Frank has strenuous objections to the many, many, many scenes in the comic portraying bondage, spankings, and homosexuality. Why is it all there? Turns out there’s a story…

We flashback to the Roaring Twenties and the younger Marston is a charming and popular psychology professor at Harvard. He’s an enthusiastic believer in the equality of women. Considering his wife Elizabeth (Rebecca Hall), it’s easy to see why. Elizabeth is prickly, demanding, and brilliant, and together they are attempting to invent the systolic blood pressure test, a critical component of the lie detector. Then Olive (Bella Heathcote) enters their lives. She’s a young Radcliffe student who takes a job as their research assistant. In your standard biopic, we’d be treated to the Great Man cheating on his wife with the nubile young assistant. That’s…ah….not precisely what happens here.

Instead, polyamory blooms. In an exceptional scene involving the testing of the lie detector, we see Bill and Elizabeth and Olive fall in love with each other. There’s a problem, as all three of them realize they live in the exceptionally prudish United States, and their relationship could cost them their careers and the hopes of a decent life. You know what it’s like when you’re head-over-heels smitten, though? The impossible starts to look a little more possible.

They try to make it work. For a while, it does. It really does. Bill has developed the DISC theory, which describes the behavioral pattern of dominance, inducement, submission, and compliance. He believes in an idealized state of submission to an authority that’s strong, loving, and feminine. They put DISC theory into practice, leading to bondage and dress-up in the bedroom. As an enthusiastic devotee, Bill posits that the world would be a better place if more people were open to DISC theory. How can he spread his message in a way that’s fast and easy to understand? By using comic books in general, and the creation of an icon in particular.

The timing of the release of this film couldn’t be better, considering the implosion of Hollywood producer and professional sleaze Harvey Weinstein and the ascension of 45th President and accomplished lecher Donald Trump. We’ve got two strong women straining against pointless societal constraints, and a man doing his level best to be a decent ally to them. A lesser filmmaker would laser-focus on just the kink and keep everything just this side of porn. Director Angela Robinson is too smart for that, and her scenes of rope-play and erotica are portrayed as steamy, elegant, and healthy. What a concept. While the film’s pacing is a little choppy at times, Robinson has made a great looking film. I was particularly impressed with a scene set in the back of a costume shop. Olive is embracing her sexuality through choosing a costume. As she picks implements, a tiara, boots, a lasso, and wrist bracelets, we see a transformation into an instantly recognizable figure as well as Olive’s full ownership of her sexuality. Cinematographer Bryce Fortner backlights her with a golden glow, and that shot alone becomes an all-timer.

Robinson also wrote the screenplay and, while mostly solid, it still runs into many of the old biopic cliches. Too often, tension is undermined by hopping back and forth through time, particularly at the most obvious moments possible. There are also too many scenes of one member of the trio getting upset, storming out of a room, and another member racing after them. As an unrepentant nerd, I never thought I’d say this, but the comic book stuff isn’t terribly interesting, and it feels like Robinson had to get through that aspect in order to reach what really interests her. Her script shines when she’s exploring the dynamic between Elizabeth, Olive, and Bill, and the subtle and overt ways their relationship changes. Those moments are absolutely enthralling.

Chemistry between two actors is tough to find. Here, there needs to be chemistry that’s electric, organic, and real between three actors. Luke Evans’ Bill is charismatic and likable, and he’s frequently a stabilizing influence in the relationship. Rebecca Hall and Bella Heathcote are the true draw, though. Both of them are accomplished actors with very specific screen presences and acting styles, and they compliment each other wonderfully. We see anger, resentment, lust, humor, and real love crackle between them, sometimes all in the same scene. Plus, any movie featuring the mighty Oliver Platt as comic book publisher M.C. Gaines is okay in my book.

Is Professor Marston and the Wonder Women historically accurate, though? You know what? I don’t think I care. The real Bill may have been a serial philanderer who used his privilege as leverage. The real Elizabeth and Olive may have loathed each other. Angela Robinson’s film tells us about an interesting aspect of pop culture and gives us a timely celebration of feminine power. Considering what’s happened so far in 2017, that’s wonderful.

**The best of all possible worlds scenario is when historical accuracy and strong filmmaking come together. Then you get classics like A Night to Remember, Apollo 13 and 12 Years a Slave.

***Don’t fall into the trap of believing that a documentary is automatically objective. While documentaries (usually) utilize real footage and don’t stage scenes, there’s still a very real and subjective point of view there.

Tim Brennan
Tim has been alarmingly enthusiastic about movies ever since childhood. He grew up in Boulder and, foolishly, left Colorado to study Communications in Washington State. Making matters worse, he moved to Connecticut after meeting his too-good-for-him wife. Drawn by the Rockies and a mild climate, he triumphantly returned and settled down back in Boulder County. He's written numerous screenplays, loves hiking, and embarrassed himself in front of Samuel L. Jackson. True story.
See More Articles From Tim Brennan
Tagged: angela robinsonbella heathcotebryce fortnerconnie brittonluke evansoliver plattprofessor marston and the wonder womenrebecca hall
Boulder Colorado Air Quality