Flashback ~ Back In The Days When I Used A Record Player…

Music is accessible in so many ways now in 2014, and it is honestly a wonderful phenomenon thanks to technology. However, a large majority of people my age or younger are not too familiar with a wonderful piece of equipment known as a record player, or by its more popular name a turntable. Once you hear a song on vinyl, especially a song you really enjoy, it does not matter what else you have heard it on: it will most likely not compare. The sound of the needle touching a record, the requirement of moving the arm to as close to the edge of the record of possible, and once you catch a whiff of the record? It’s over, you will NOT forget that first experience and you will be craving the opportunity to listen to more records, more singles, more volumes released by record companies long discontinued from yesteryear. The best part of that for those of us hear residing in beautiful Boulder, CO, is the fact that we have two record stores within a very short commute of each other. 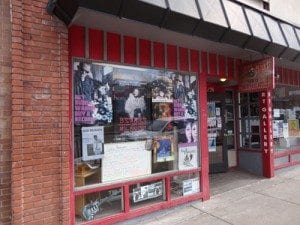 Albums on the Hill is located on University Hill right across from the lovely CU-Boulder campus, and it has quite a selection of albums, ranging from vinyl, CD’s, and even tape cassettes. It has long been known as an establishment that has a wide selection of genres and artists; it’s also a place that every music listener must go especially if one is so inclined to reminisce about having tangible music. Plus, if you are looking for shows to go to, it is right across from the Fox Theater, and the staff generally has a good idea of what shows are coming up when. Every single person working there that I have talked to while perusing some vinyl has been very engaging and well-versed in multiple genres. Even just one trip will most likely peak an interest in tangible music that you might not have realized existed, until now. 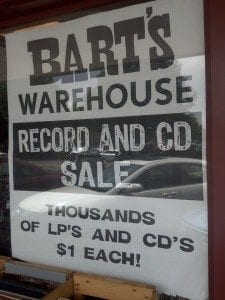 A vinyl store name that is quite revered in Colorado but new to Boulder is Bart’s Record Shop on 16th and Folsom. I have heard quite a few good things about the Bart’s location down in Denver and it has been around a number of years, but I have not unfortunately been to this record store as of yet. As mentioned in last week’s post, it is always a good idea to try a new place one has not ventured to before and this weekend I will be trying my best to do so and check out this record store. The sign alone (above) is already tempting me to head out right now and see what the selection has to offer; hope to see some of you all out there. That is going to do it for next week, make sure to check out all of the About Boulder articles this week, and check back here next Friday for the best in music Boulder has to offer.