Be Creative This Halloween! 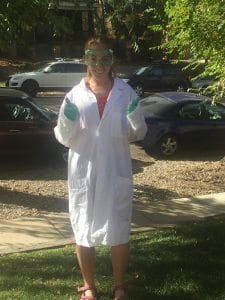 Halloween is quickly approaching and that means there isn’t a whole lot of time left to pull an original costume together. I’m someone who likes to start thinking of costumes in the summer (sounds a little overzealous) but I like to be something that not a lot of other people are going to be. I also like to stay away from costumes that you know will be “popular” due to influential TV shows or movies, etc. during the year. Putting thought into your costume makes the experience of Halloween a lot more fun. My favorite costumes tend to involve puns. Be creative!

The costumes that a lot of people will probably dress as this year are:

Then there are costumes that are over done every year, these are the typical “last minute” costumes:

There are two weeks left to come up with good ideas for Halloween so I encourage everyone to not wait until the last minute! Hopefully this will at least get you thinking of what to be. Try and be original. Have the costume that people will wish they were in and will want to be the following year!

Lily Lemire
Lily is a senior at the University of Colorado at Boulder and will be graduating with a Bachelor of Arts in Film Studies along with a certificate in Business. She is originally from Scarborough, Maine, but decided to venture to Colorado for it's beauty and to get back in touch with her birth place which is Boulder. She is a Film Studies major because she is very interested in the behind the scenes of what goes into making a film. Not only that, but her favourite hobby in the world is to watch movies. She recently went abroad to Sydney, Australia to get a taste of a different culture. While being there, she learned to not take life too seriously, and to slow things down. The Australian lifestyle can really teach a person how to be chill. You can find Lily at the movies, hanging on Pearl Street having a beer with friends, or at the breathtaking lookout of Flagstaff enjoying the view.
See More Articles From Lily Lemire
Tagged: 2weeksleftBeCreativecostumeCUhalloweenLastminutePopular