Becoming Yourself Through Infinite Jest 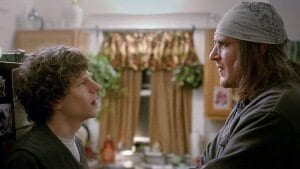 Pew Research performed a poll back in January of 2014 that’s simultaneously unsurprising and depressing. They found that the average American adult reads approximately 5 books in 1 year. For the most part, we live in a country that doesn’t truly value the written word, and hasn’t for quite some time. We say we do, because who wants to look like an uneducated troglodyte? But we always complain that we’re too busy to read, yet we make time to binge watch Netflix.*

Yet, just because something isn’t popularly known doesn’t mean it has no value. Odds are most people have never heard of or are only vaguely aware of David Foster Wallace. He wrote a number of books, both fiction and non-fiction, and is perhaps best known for 1996’s Infinite Jest, a lengthy novel that touches on themes of addiction, film theory and family relationships, among others. It’s (mostly) considered to be Wallace’s magnum opus, one of the great American novels written in the last 40 years. It transformed Wallace into a literary celebrity. Unfortunately, Wallace’s suicide in 2008 transformed him into an icon.

David Lipsky was aware of this sooner than most. In 1996, he was working as a reporter for Rolling Stone. Upon reading Infinite Jest, he fell madly and hopelessly in love with the book**, and pleaded with his editor to assign him to interview Wallace. Lipsky spent 5 days with Wallace during the tail end of a book tour. In 2010, he wrote about the experience in Although of  Course You End Up Becoming Yourself. Now we have the film adaptation, The End Of The Tour. It’s a film that’s intelligent and compelling, and anchored by two excellent performances, with Jason Segal playing Wallace and Jesse Eisenberg playing Lipsky.

Lipsky is a novelist himself. Like most writers, he hungers for notoriety, and while he worships Wallace’s writing, there’s an undercurrent of jealousy. He badgers his editor for the assignment, but there’s a catch. Since Rolling Stone hadn’t interviewed writers in years, there needs to be a hook to make the piece sexy. Rumors had flown around of Wallace battling heroin addiction, and Lipsky is told to get to the truth of it. So Lipsky travels to Wallace’s home in the snowy suburbia of Bloomington, Illinois. He discovers that his hero is…normal, or at least trying like hell to be. He eats junk food, plays with his Labrador Retrievers, and lives in a nondescript ranch house.

During the days that followed on the book tour, Wallace and Lipsky would travel to the Twin Cities and back by car and plane. We watch them size each other up, let down defenses, and fall into something that’s not quite a friendship. Their dynamic ebbs and flows. Wallace is forthcoming, but evasive, intelligent, but proudly average. Wallace grapples with his difficulties towards his new found fame. He’s uncomfortable with the interview process, and only hints at his struggles with depression and substance abuse. Lipsky, on the other hand, has to overcome his hero worship and do his job objectively. But as a writer himself, he’s not only grappling with professional envy, but Wallace’s seemingly false modesty.

But here’s the thing. First, understand that the film is a gabfest like My Dinner With Andre. It’s mostly scenes of Wallace and Lipsky talking. Talking about dogs. Talking about loneliness and what fame really means. Talking about the brilliance of Die Hard.*** Talking indirectly about addiction and mental illness. It’s a film where not a lot happens, but an enormous amount happens. It’s a running conversation between a couple of guys who are very smart, and the verbal ping ponging is absorbing.

Also, David Foster Wallace has his admirers, and on the off chance they’re looking for a summing up of his life and work, they won’t find it here. The End Of The Tour isn’t a standard biopic, nor does it dig deep into the themes of Wallace’s work. Wallace isn’t even the main character. Lipsky is the real protagonist, and the film is really a snapshot of 5 days where their lives intersected. If anything, it reminds me of Amadeus, where we’re examining the relationship between a creative and competent professional and a great artist.

Director James Ponsoldt and screenwriter Donald Margulies have created a fascinating portrayal of a complex relationship. They know that the dynamic between reporter and subject can be vampiric. Lipsky’s interviewer wants to be a decent guy, but that’s not going to stop him from trying to extract Wallace’s dark secrets. For Wallace’s part, he knows it’s expected for an interviewee to give a kind of performance, portraying the kind of person he’s expected to be.

Ultimately, the film would fail without Eisenberg and Segal’s excellent performances. Eisenberg has carved out a niche for himself playing dweebs. Sometimes he’s a likable dweeb, like the sweet stoner in American Ultra or the nervous survivor in Zombieland. Other times he goes for darker fare, like his portrayals of Mark Zuckerberg in The Social Network, or as Lex Luthor in the upcoming Batman v. Superman. Here, Eisenberg is a guy who genuinely wants to be decent, but he can’t quite help being weaselly, and I admire him for fully portraying a pretty unlikable character.

Segal’s performance as Wallace, I think, is going to end up earning him an Academy Award nomination. He’s known for playing characters that are goofy and energetic, like a Golden Retriever trapped in the body of a man. As Wallace, he tamps down that energy and occasionally lets it escape in moments of enthusiasm or despair. He doesn’t look too much like the real David Foster Wallace, but that doesn’t matter, since he seems to have captured Wallace’s essence.

So will the average person line up to see The End Of The Tour? I’m not sure, since we mostly shrug dismissively when it comes to writers. Here’s what I hope for. Someone gets curious and sees the film. They’re intrigued and try out Wallace or Lipsky’s work. From there, they’re compelled to expand their literary horizons, since ultimately reading is a means to spend time in somebody else’s head, and perhaps discover what it means to be human.

*That explains the rise of Donald Trump so much.

**I think everybody who reads has books or authors that they become unreasonably excited about. One of mine is Joe Queenan, a writer that’s known for a scabrous and cutting wit. His autobiography, Closing Time, is really something special.

***The greatest American action movie ever made, full stop.

Tim Brennan
Tim has been alarmingly enthusiastic about movies ever since childhood. He grew up in Boulder and, foolishly, left Colorado to study Communications in Washington State. Making matters worse, he moved to Connecticut after meeting his too-good-for-him wife. Drawn by the Rockies and a mild climate, he triumphantly returned and settled down back in Boulder County. He's written numerous screenplays, loves hiking, and embarrassed himself in front of Samuel L. Jackson. True story.
See More Articles From Tim Brennan
Tagged: david foster wallacedonald marguliesend of the tourjames ponsoldtjason segaljesse eisenberg
Boulder Colorado Air Quality