This story begins, like many radical Boulder tales, on Pearl Street. Outside of the Into The Wind toy store on Saturdays you can find several young men spinning colorful toys at mind-boggling speed. This is the BoCo Yoyo Club, founded in 2014 by Steve Knabe and Hunter Momberger. The club has met every possible Saturday for more than a year now. They gather on Pearl Street, and rock everything from yoyos and kendamas to spin-tops. If you haven’t heard of these toys, check out the club for some free and unique entertainment.

Wanting more than their Saturday meet-ups, Hunter and Steve decided host the 2015 Colorado State Yoyo Competition in Boulder. Luckily, I know this duo, and they invited me to the competition through Facebook. CU lent the Boco Yoyo Club the Glen Miller Ballroom. I strolled through the doors into a a colorful hoard of yoyos, and the boys who wield them.

Everyone was talking and doing tricks that were both casual and staggering. The tricks, the gear, and the lingo acted as common ground for the group. Pre-Competition, the air buzzed with a sound of ball-bearing yoyos. Occasionally, there was a knock of a prized yoyo on hardwood. On the tables, packed cases of toys lay open like treasure chests.

The competition was overseen by Jon Gates, a yoyo veteran and world class spin-top player. Jon acted as a judge alongside Zach Gormley, a world class yoyo player who took 5th place in the 1A division at the World’s Contest in 2014. They made sure the competition was fair, and had the unenviable task of choosing the winner of the freestyle competitions 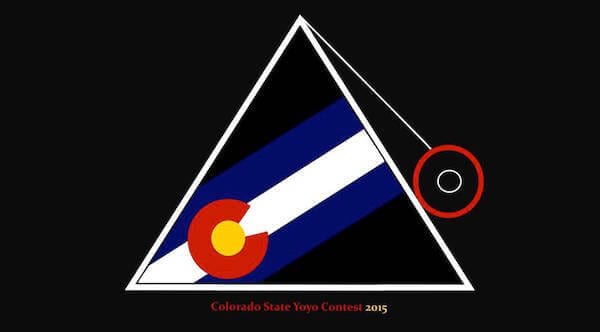 The “Trick Ladder” began the real contest. Players stood in a circle, and if you missed twice you were out. You had to complete a standardized series of tricks of increasing difficulty. Everyone was encouraged to be honest about their mistakes, and the judges amidst the players guaranteed all were held accountable for their true skills. But the real madness came with the Freestyle competition.

Players picked their music, and hopped on stage to show off tricks they had fine tuned for weeks. Yoyo strings were wrapped around necks and arms. Spinning metal toys whizzed through legs and soared through the air. The crowds went wild. All the players had great enthusiasm. From the newest initiates to the seasoned champions, the boys went all out. There were even impromptu demos of other yoyo styles like “4A,” where the yoyo is thrown off the string, allowing it to sail through the room only to be caught and returned. These were not your grandpa’s yoyo tricks.

The competition finished with Chris Rodriguez winning the Freestyle contest. He earned 0.5 technical points less than the 2nd place winner. His showmanship took him to the top. With a sport that lends itself to performing, technicality alone will not win a Freestyle competition. However, the Trick Ladder is all about technical execution, and Taylor Noyes won that with his skill. After all the festivities, $1500 in sponsor prizes were dueled over or raffled off.

Post-Competition, I asked Jon Gates about the male-domination of this sport. He said that boys and girls tend to learn their hand-eye coordination skills differently. Most girls that compete are winning players, because they find yoyos easy to handle. Boys can find it harder, and it inspires them to hone their skills and continue throwing and competing. Being a man of science, I asked my girlfriend if she had ever played with a yoyo. She said that it was simple for her. I thought of my own hours of practice and frustration. I think Jon might be right on this one.

The BoCo Yoyo Club is undoubtedly an atypical Boulder community. Yet the intense creativity of the players, their confidence, and artistic showmanship are vital to much of Boulder’s art culture. This budding group of young men is adding a new dimension to the performing arts scene in the city, and I am all for it. Check out the club Saturdays on Pearl, from 3-5pm. When the contest rolls around next year, hopefully you will join me in the dazzled crowd.

Joe Inclan
Originally from Lone Tree, CO, Joseph Inclan graduated from Regis Jesuit High School in 2010. He applied to just two universities, DU and CU Boulder, and was accepted by both. Joe chose CU for its beauty, and the appeal of the open-minded and quirky city ensured him how right he was to choose Boulder. With a Bachelor’s degree in both English Creative Writing and Philosophy from CU, he has dabbled in everything from poetry to basic technical articles for 3DPrintingIndustry.com. His hobbies have a range too, from fountain pens and handwriting, to yoyos and skill toys. The most important thing for Joe is to understand things complexly. Boulder and its residents live in an evolving miasma of ideologies and cultures which demand more than a 2-Dimensional perspective. Joe’s fascination with Boulder stems from the fact that it is far more than the sum of its parts, and that is a unique quality. He is glad to be a writer with AboutBoulder.com and looks forward to spreading his knowledge of Boulder with the community.
Tagged: About BoulderboulderColoradocommunitycontestfamily funfuntoysyoyo