Blood On The Plains 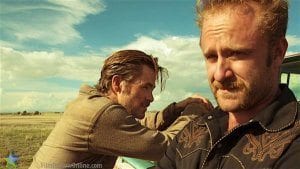 The sky is massive in West Texas. It seems to go on forever, stretching out as far as the eye can see, and eventually meeting the dusty landscape in a far off horizon. When you’re under that sky, there’s a sense of insignificance, a feeling that you matter about as much as the scrub brush.

Maybe that’s why the Texan identity has always been so outsized. It’s a way for the citizens to try and measure up to that vast sky, to prove to themselves and the universe that what they do has meaning. Maybe that’s why the bonds of family seem to be a little bit stronger, there’s a pride of familial continuity, even if it doesn’t necessarily have anything to do with you.

My mother’s side of the family was from Sweetwater, a town right in the midst of West Texas. Growing up, I had a friend who was a direct descendant of Sam Houston, the legendary politician who brought Texas into the United States, served as governor, and opposed secession prior to the Civil War. She was thrilled by that and wore it as a badge of honor. Texas is a place where the recognition of that distant relation helps to define you. The neo-Western Hell or High Water understands that, and a lot more, besides.

We’re introduced to the Howard Brothers. There’s Toby (Chris Pine), a divorced father of two. He’s behind on child support payments, and he wants to do the right thing by his ex-wife Debbie (Marin Ireland). But we sense that he can’t quite get his act together. His older brother, Tanner (Ben Foster), definitely doesn’t have his act together. He’s an ex-con, and he enjoys the ladies, a cold beer, and extraordinarily poor impulse control. Tanner is the kind of guy that should have a Born To Lose tattoo, and if he seems like a walking cliche, it’s only because most families have an unrepentant screw-up just like him.

Their mother has recently died, and due to her debts, Texas Midland Bank is preparing to foreclose on the family ranch. Turns out that the ranch is sitting on some of the last untapped oil in Texas, which can make them filthy rich. But Toby is a smart guy, and he’s got a plan. The Howard boys will rob branches of Texas Midland first thing in the morning. They only steal loose bills in small denominations, in order to avoid ink packets. By sticking to banks within Texas, the FBI won’t get involved. Afterward, they scoot across the state line to a casino in Oklahoma, turn the cash into chips, then cash in the chips, thereby laundering the money. After each robbery, they bury their getaway car with a backhoe, then buy another beater in cash. The Howards will then pay off the debt and save their ranch. As plans go, it’s a pretty good one.

The authorities aren’t too interested. But Texas Ranger Marcus Hamilton (Jeff Bridges), senses a deeper plan at work. His retirement is looming, and his partner Alberto Parker (Gil Birmingham) wonders what Hamilton will do when he has nobody to outsmart. Yes, we have the cliche of the cop getting ready to ride off into the sunset after cracking One Last Case. But it doesn’t feel like a cliche here, it feels like a smart man trying to solve a particularly tricky problem.

As long as there have been movies, there have been movies about cops and robbers. There are a million different ways you can go with a concept like that. The really good ones, the ones that stick around years later, know there’s more than just the visceral thrill of the hunt. You’ve got a movie like Heat, which explores how men shape their identities through their jobs. Hell or High Water is similarly intelligent. It’s set against the backdrop of economic depression, and within the small towns are For Sale signs, boarded up shop windows, and modest homes with second and third-hand furniture. It’s the creeping death of the West, where white settlers stole land from the natives, and now the same land is being stolen by pitiless financial institutions.

Maybe you’re thinking that this sounds like a sub-par No Country for Old Men, where the characters are helpless to stop from being crushed by forces beyond their control. There’s a little bit of that here, but it’s balanced out by some great character-based humor. Most of it comes from Bridges’ charmingly racist Hamilton constantly needling his mixed-race partner Alberto. Much of the humor has a jet-black edge to it, like a robbery that goes bad due to numerous bank patrons who are packing heat and just waiting for the chance to be heroes. This is due to the excellent screenplay by Taylor Sheridan. How good is this guy? Sicario was his first produced script, and this is his second. That’s how good he is.

This is the first American feature for director David Mackenzie. For an English filmmaker who has a) primarily made British independent films and b) shot this film in New Mexico, it’s startling how well he captures the feel and authenticity of West Texas. While he does nice work with the robbery sequences and gunplay, this film is more of a character piece than a thriller. He’s able to examine numerous themes: the legacy of family, vigilante justice, guilt, and he does it all in a way that feels natural instead of preachy.

It helps that Mackenzie has an extraordinarily talented cast to work with. Even his extras look like locals as opposed to pampered stars. Nothing against the leads, since they do fine work as well. As Hamilton, Jeff Bridges is working in a similar key to his marble-mouthed Rooster Cogburn. Even though he’s playing nearly the same part here, Bridges is able to flesh out the role and make it unique. There’s a reason why the guy is a national treasure.* As Tanner, Ben Foster continues his career of playing twitchy scumbags. There’s a reason why, though. He’s really good at it. Foster is a highly underrated character actor, and he’s got a knack for playing guys with pent-up emotions that inevitably explode.

But the standout of the cast is Chris Pine as Toby. Pine is interesting, a character actor trapped in the body of a leading man. While he’s best known as the cocky Captain Kirk from the Star Trek rebootquels, he frequently does more interesting work in smaller scale projects. He was enjoyably berserk as one of the Tremor Brothers in Smokin’ Aces. His Toby is a smart guy, hiding it under a good-ol’-boy drawl. There’s also a resigned fatalism to Toby. As long as his family is taken care of, it doesn’t seem to matter much if he lives or dies. It almost seems like Pine’s startling blue eyes are muted, just like the landscape around him.

We’ve gone through a summer crammed with superheroes, loquacious animals, and blockbuster fatigue has set in. We need a palate cleanser to get us ready for Oscar season. Hell or High Water is just the thing. Filled with indelible characters, sneaky humor, and mournful intelligence, it’s a film that deserves to be seen.

*Even when he does a terrible movie like The Vanishing, Jeff Bridges is never terrible in it. He doesn’t know how to give a bad performance, his performances just don’t sync up with the movie sometimes.

Tim Brennan
Tim has been alarmingly enthusiastic about movies ever since childhood. He grew up in Boulder and, foolishly, left Colorado to study Communications in Washington State. Making matters worse, he moved to Connecticut after meeting his too-good-for-him wife. Drawn by the Rockies and a mild climate, he triumphantly returned and settled down back in Boulder County. He's written numerous screenplays, loves hiking, and embarrassed himself in front of Samuel L. Jackson. True story.
See More Articles From Tim Brennan
Tagged: ben fosterchris pinedavid mackenziegil birminghamhell or high waterjeff bridgesmarin irelandtaylor sheridan
Boulder Colorado Air Quality