In all honesty, it’s definitely one of the strangest places for a taproom. It’s the kind of place, the first few times you visit, you’re certain you’ve made a wrong turn. The mangled corpses of wrecked cars line your path, delving further from the street, and deeper into this strange hodgepodge of commercial buildings. Of course, the iconic capital “A” shines on one unassuming building, and it’s perhaps at that point you notice the massive fermentation vessels lining the street. Avery Brewing Company has been a Boulder institution for nearly 22 years; however, the brewery’s final night in the city was February 9th. I felt it only appropriate, then, as my first jump into Boulder‘s 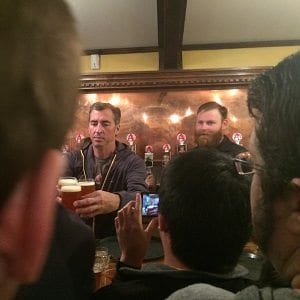 industrious craft beer scene, to go to the brewery’s massive sending off party, and give my take on some of their fantastic fermented creations.

Getting to Avery’s Boulder location, as stated above, is certainly a task of will, and ignoring your phone’s GPS instructions. Located just east of 55th on Arapahoe, Avery would probably be Boulder‘s best kept secret, if it weren’t for the award-winning and innovative concoctions they’ve been pouring for the last two decades. Typically, on a Monday night, you’d expect a smattering of people; perhaps all the tables would be taken up front, relegating a latecomer to the massive barreling room in the back. However, this Monday night – Avery’s final night in Boulder – things were a bit different. My roommate and I pulled in, only to be greeted by a swarming mass of bearded and flanneled men buzzing around the bar to grab up any one of Avery’s twenty beers on tap. To describe the atmosphere as one of joviality would be a heavy understatement. No, Boulder‘s loyal craft beer fans were absolutely ecstatic to drink at this historic taproom one more time. Chants of the different bartender’s names rang out, accompanied by cries of gratitude to Adam Avery, the brewery’s president and Brewmaster, who happened to be behind the bar pouring alongside his crew (Not to mention, the people surrounding the bar also uttered a few rousing chants of “USA! USA! USA!” and “Quack! Quack! Quack! Go Ducks” for some reason).

Through the throngs of beer drinking boys and girls, we made our way to the barreling room, which, on any other night, is a sight to itself. However, the backroom vibrated with energy to the sounds of the band blasting away on their impromptu stage (Interestingly enough, the combination of concrete walls, exposed insulation, and barrels filled with quietly fermenting beer made for impressive acoustics).

It almost seems unfair to try to summarize Avery’s variety of beers in one single post, but I attempted to try a good sampling of Avery’s distinct and  diverse beer selection. To put it simply: Avery is not afraid to push the envelope when it comes to crafting quality, albeit sometimes quirky, beers. To fully explore Avery’s massive menu would require a long few days of drinking, naturally accompanied by water and nachos, of course. With that in mind, the three beers that I chose to write on, I think, demonstrate the diverse nature of Avery’s brew selection. 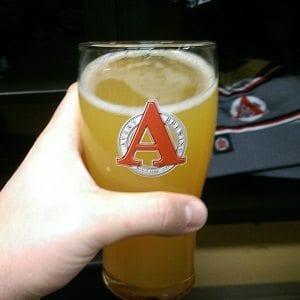 Now, I’ll be the first to tell you that I’m not typically a fan of fruit beers, with very few exceptions. The name literally translates to “Passion Fruit Devil,” and it’s a beer unlike any other I’ve ever tried. With a sweet and citrus nose, a thin and bubbly head, and a golden hue, one expects the typical witbier experience. However, the expected wheat-heavy flavor makes way for the tart – almost sour- passion fruit that the beer is brewed with. The sourness of this beer is quite reminiscent of a good lacto soured beer, although considerably more subtle. As the style would imply, the beer is very crisp, very light, and very refreshing. While I was drinking this guy on a cool night in February, the Lilikoi has been a first choice for me during Colorado’s hotter months. Also, there is talk of this beer coming to cans, which means this beer will have even more influence on my expanding beer gut. Totally worth it, by the way.

For those hop-heads out there, an allegiance that I will wholeheartedly claim, some of the most hit-or-miss beers come from this distinct, bitter style. In some cases, the hop characteristic is depressingly 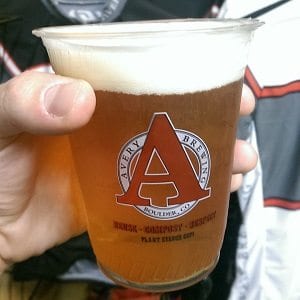 underwhelming, or downright offensive. This beer, in my opinion, fits the style perfectly. As a matter of fact, the BJCP (or, the Beer Judge Certification Program) often cites the Avery IPA as the textbook example of an American West-Coast IPA. As one of Avery’s earliest brews, it’s really tough to find much wrong with the beer. The beer maintains its creamy head surprisingly well, with a solid amount of lacing (less so on my plastic cup). The beer sports a  deep amber color that is nearly opaque. Its smell is reminiscent of a daytime hike through Chautauqua (minus the drunk frat boys), with clear piney notes. In this case, the flavor follows the smell. A sharp bite from the conglomeration of hops gives way to a creamy, woody finish. If I had anything negative to say about this beer, it would be that it’s surprisingly normal for the brewery. I mean, don’t get me wrong: the beer is delightful, and a great example of a classic IPA. Coming from any other brewery, this would be the first one to drink. With Avery, it’s a tougher decision, especially surrounded by all the unique beers at the tasting room.

How could I go without one of these bad boys on Avery’s closing night in Boulder? This beer is named 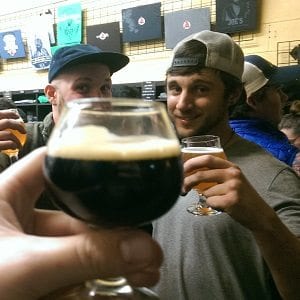 after a fallen angel from German folklore, and sports an ABV higher than most wines, and has a complexity that is rarely seen in Colorado beer. The beer itself is an inky black, with an off-white, and surprisingly long-lasting foam. On the nose, you know the beer means business, with a very strong boozy scent. However, the nose also makes way for deeper (and far tastier) tones, dark chocolate, fig, and licorice. Once again, the taste followed the scent of this one. While the bite of the high gravity was apparent, the flavors of the roasted malt, chocolate, and coffee pervade this evil and dark beer. Now, the Meph is not the type of beer that you can necessarily drink all night. One little taster of this was enough for me to call it quits. It’s a big, BIG beer, and not something I would drink on anything other than a special occasion. On the other hand, I could see this one pairing exceptionally well with a chocolaty dessert. However, at 17.1%, it’s easy to go overboard!

Beer drinkers in Boulder need not be thirsty long: the brewery is opening its larger Gunbarrel location on February 16, which will include a larger taproom, a larger brew space, and a restaurant. Come on by for the opening ceremony. If it’s anything like the closing party this week, you’re sure to have a blast. Certainly, if you haven’t sampled any of Avery’s beers, I strongly recommend a trip over to see what Boulder‘s craft beer scene is all about.