Bringing Balance To The Force 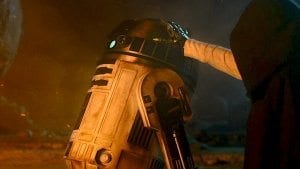 Back in the old days of 2009, you might remember that J.J. Abrams rebooted the Star Trek franchise. Abrams took a series that had lain dormant and supercharged it. When we think of Star Trek, we think of sci-fi that’s a bit cerebral, that’s a little stately, and that’s focused more on exploration. “Screw that,” Abrams said.

Instead, his Star Trek was filled with finely cast actors and rapid pacing (with some glaring plot holes). It had a breathless, gee-whiz sense of wonder. It didn’t want to screw around with long tracking shots of the starship Enterprise, it wanted to move, dammit! It felt suspiciously like a Star Wars film, only there were no lightsabers. Abrams was never quite the right fit for Star Trek. His sensibilities are pulpier and flashier. But that’s why when it comes to George Lucas’ universe of Jedi, Wookiees, and the like, he fits like a long missing puzzle piece.

He’s directed Star Wars: Episode VII – The Force Awakens, and he’s taken a franchise that stunk to high heaven for the better part of a decade and restored its luster. While the movie feels in some ways like a remix of Star Wars and The Empire Strikes Back, it has enormously likable characters, soaring emotions, and a story that confidently rides a fine line between mythic and goofy.

Abrams gets what works about the series better than its creator did, and he’s put his own spin on it. For example, the opening crawl to The Force Awakens states, “Luke Skywalker, Jedi master, is missing.” A sentence like that ignites the imagination* and gets the blood pumping. Also, you might remember that the first three films in the series were not what one would call diverse. There were so many white people running around that it was like the galaxy was colonized by Greenwich, Connecticut. Here, however, the central characters are a woman and a black man. While neither of those aspects matters to the characters, it reflects a little better what our world looks like.

On the planet of Jakku, we meet heroic X-Wing pilot Poe Dameron (Oscar Isaac), who has obtained part of a map revealing Skywalker’s location. Poe hides the map fragment within his droid BB-8, who escapes just before all hell breaks loose. Poe is quickly captured by the evil Kylo Ren (Adam Driver), a Sith poseur and Darth Vader acolyte. Ren wants the fragment, and must track down the elusive droid. Meanwhile, we’re introduced to Rey (Daisy Ridley), a loner scavenging the wreckage of a crashed Star Destroyer. She meets BB-8, and also links up with Finn (John Boyega), an ex-Stormtrooper who went AWOL after witnessing a village massacre. While being pursued, Ren and Finn steal a familiar hunk of junk starship, the Millennium Falcon, which just happens to be captured by a freighter, which just happens to be piloted by Han Solo (Harrison Ford) and Chewbacca, who just happened to be searching for the Falcon in this part of the universe.**

From there…I cannot say, or don’t want to, more accurately. However, if you’ve watched the original films recently, you’ll notice several aspects and story beats are familiar. A desolate desert planet. An elfin character who possesses mystical knowledge. A cantina stuffed to the gills with bizarre creatures and live music. There’s definitely a goodly amount of fanwankery on display. But the characters are so appealing and sketched so well, that every time the movie pummeled me with nostalgia, it quickly followed up with the characters doing or saying something interesting.

The cast makes this flick just sing. Oscar Isaac’s Poe is a straightforward hero. He’s loyal, brave, and wants to do the right thing. Like Captain America in the Marvel movies, it’s great seeing someone do the right thing just because it’s the right thing to do. As Finn, John Boyega is outstanding. He was bred to be an unthinking soldier, but he suffers pangs of conscience. Finn is alternately cowardly and brave, and while he initially tries to B.S. Rey into thinking he’s a dashing rogue, he gradually grows into the part.

Let’s talk about Rey for a moment. Before this film, English actor Daisy Ridley was virtually unknown. She’d done some TV and indie cinema work, but nothing big. That’s all going to change because she is now a bonafide movie star. As a scavenger, Rey was forced to adapt after being abandoned by her family. She hopes they’ll return, but is afraid to move on and miss her chance of being reunited. She’s a fighter, brilliant with machines and Force-sensitive, and she doesn’t need to be saved by anybody.

As the villainous Kylo Ren, Adam Driver is fascinating. Where Darth Vader was cool and calculating, Ren throws pointless tantrums. While he desperately wants to follow in Vader’s footsteps, flickers of decency still remain. There’s real psychological complexity here, and Kylo Ren is the kind of character George Lucas tried and failed to create with Anakin Skywalker in the Prequels.

The returning cast members do good work. Carrie Fisher’s Leia is now a general, and while she’s flinty and strong, she doesn’t do much beyond barking orders at soldiers. Anthony Daniels C-3PO is mildly irritating, but that’s part of the character’s charm. Peter Mayhew returns as walking carpet Chewbacca, and he continues to be ferocious and fun.*** You’ll notice I haven’t mentioned Mark Hamill as Luke much, which is because he barely appears.

Harrison Ford reminds me a lot of Bruce Willis. Like Bruno, you never know if you’ll get a barely conscious performance with Ford that’s in service to a paycheck, or something more lively. He hasn’t given a damn in years, but we’re in luck. He effortlessly steps back into the role of charming scoundrel Han, and it feels like an organic continuation of the character.

Ultimately, there are only a few things The Force Awakens needed to do to be a success. It needed to course correct after the lousy Prequels. It needed vibrant new characters that have the torch passed to them by the old guard. It needed to feel familiar enough to be recognizable as Star Wars, but new enough to kickstart another set of chapters. It does all of these things handily. I wouldn’t go so far as to call it one of the best films of the year, but it’s rock-solid entertainment, and it’s restored my faith in a galaxy far, far away.

*As opposed to the opening crawl of The Phantom Menace, which led with, “Turmoil has engulfed the Galactic Republic. The taxation of trade routes to outlying star systems is in dispute.” This kind of thing causes comas, seriously.

**That’s one of the joyful aspects of Star Wars, the ridiculous coincidences. If your suspension of disbelief can’t handle that, just tell yourself it was all the Will of the Force.

***Though I was strangely disturbed to discover that Chewbacca has thumbs.