As embarrassing as it is, I’ll just have to come out and say it. Despite being a Colorado native, and despite living in The Bubble for the better part of the last decade, for whatever reason, this winter just seems more tedious and annoying than any I can remember. Beautiful sunny days are interrupted by harrowing snowstorms, only to be followed by more sun. Yes, I realize this is par for the course in Colorado, but after the fifth alternation between Colorado’s hot and cold seasons in just this week alone, I’m ready for permanently warmer weather, Punxsutawney Phil be damned. On particularly frigid days, it’s nice to visit a place with warm food and warm personalities (that is, if I can be bothered to crawl out from under my blanket, and peel away from my Netflix binging). Now, what if you could take a restaurant that sports some interesting and delightful food, and throw some delicious and unique beer into the mix? Enter BRU. 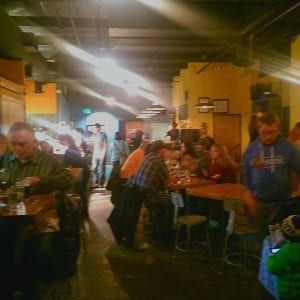 BRU, touting “handbuilt” ales from head chef and owner Ian Clark (who you might know from Centro, downtown Boulder’s answer to hip and casual Latin fare), sits in a rather unlikely spot for a brewery. Head out east on Arapahoe, just east of Foothills Parkway, and make your way through the parking lot that the brewpub shares with a glass gallery, an Indian restaurant, a dispensary, and Boulder’s famous Video Station (recently moved from its 28th Street location). Admittedly, BRU is rather unassuming from the outside, and without the major signage that many breweries employ, you very well could miss it all together. Inside the restaurant, however, is a much different story. In an aesthetic that can only be described as “elevated rustic,” BRU combines daring and classy food options with a homey feel. We were sat at the community table, next to a family of three, who were busy leaving their chalk marks on the chalkboard painted long table. While the restaurant and brewery was certainly busy, it was extremely comfortable, and despite being placed at the community table, my girlfriend and I were able to hold conversation at a comfortable level.

While the idea behind BRU is a restaurant that also hosts a microbrewery, making the food options the main attraction, the beers on tap are certainly worth a look. Clark, who calls himself a “beer chef,” specially devises each of his beers to include ingredients to have subtle and complementary flavors. Furthermore, each one of his beers is crafted to be paired with a few items on the menu. Come during happy hour, grab a plate of wings and their BRU-tine, the restaurant’s take on the Canadian favorite, and take a look at BRU’s extensive beer menu. With thirteen beers on tap, a strong variety of flavors and styles are represented. However, I’d specifically suggest BRU’s beers for those suds-seekers who enjoy the fruity taste of Belgian ales, as a strong majority of the beers on the menu were Belgian styled. Keep in mind, though, Belgian beers are diverse, ranging from light to dark, from simple to complex, and from weak to “my face is getting super hot” strong. Let’s get to it!

So, “patersbier” is Dutch for “father’s beer.” While this might lead you to assume that this a beer designed for dads, consider that this is a style that is derived from the monasteries of Belgium 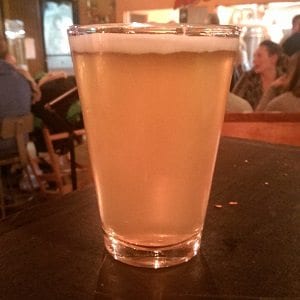 and The Netherlands. In fact, patersbier is a Trappist style that the monks, or “fathers,” brew for themselves. Typically, they are light, mild, and sport low alcohol contents. This beer had a thick and creamy head, which sat on top of its golden, hazy, and wheaty body. There wasn’t much on the nose here; maybe a slight bready and malty scent, with just the slightest inclination of citrus fruit. It’s effervescent, it’s crisp, and it’s refreshing to drink. On the tongue, the distinctive flavor of Belgian yeast takes a back seat to the bubbly, crisp, and clear body of the beer. At the back end of the sip, I was hit with just the slightest bit of orange peel. With very little hops to speak of, the beer is simple, just as the monks who derived the style intended. To that point, I suppose there wasn’t much to this beer. It’s refreshing, and I could see it going very well with a dinner on a warm summer night. At only 4% ABV, I could see this as a beer that you could keep ordering all night long.

Wanting something radically different from the Solus, I decided to reach for a brew that was perhaps on the opposite side of Belgium’s beer spectrum. Also, I got to humor myself chanting 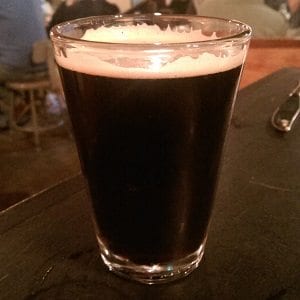 “Kali Ma, Shakte De” ala Indiana Jones and the Temple of Doom as I brought the beer to my lips (much to the chagrin of my company). It sports a dark brown head that dissipated rather quick, but that was probably more because this beer was served on nitro. The beer itself is completely black, with maybe the slightest tinge of chocolate if held up to one of BRU’s bright overhead lights. On the nose, this one was all bananas, with perhaps a slight bit of spice. Its flavor is roasty, with the slightest hint of chai (hence the Hindu deity in the name). I thought it was a brilliant flavor combination: the fruitiness of the Belgian yeast, and a spicy chai tea. Surprisingly, the beer was very thin, and did not have much of a body to speak of. With such a dark color, I was expecting quite the opposite. Like the Solus that I had before, this beer is extraordinarily refreshing and accessible, despite the color that might intimidate some beer novices.

While I’m a fan of the large number of Belgian beers BRU had on tap, I needed to come back stateside for my final taste, and what better way than with BRU’s classic American IPA? 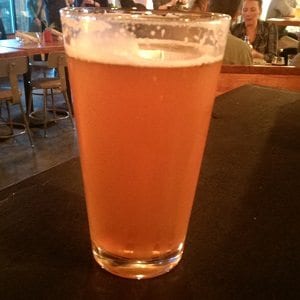 The Citrum is unlike many IPAs that you can grab in Boulder, primarily because of its hazy and off-orange color. BRU doesn’t filter their beer, and all of their brews are all carbonated naturally. When this one came to me, there wasn’t much of a head to speak of, but that could be a result of a bad pour from the bartender. However, this beer laced all over the glass. Taking a large whiff of this beer, the smell of the lemon zest and juniper berries this beer sports are incredibly apparent. This one was very carbonated, but had a really nice medium body. The sweetness of the smell gives way to a very big hops bill. On the end of the sip, I was left with the lingering, tingly sensation of hops, reminding me just how bitter IPAs can be. Truly, unless you are a bonafide hop-head, this beer might be a little bit too bitter for your taste. I thought it was a nice beer to cap my evening with. With strong, aggressive flavors, I’m very glad my night ended with this one, compared to the more subtle Belgians from earlier.

Boulder, despite being a town of only 100,000, has attracted some revolutionary and interesting food that brings self-proclaimed foodies from all over. Now, while the idea of a chef becoming a Brewmaster is novel, in concept, it makes perfect sense. Go to BRU to take your mind off the inevitable struggle you’ll have to have tomorrow with your car’s windshield, that tiny scraper thing your only weapon. Indulge in the diverse and delicious menu, and find a beer that not only compliments your meal, but compliments you as well. Stay warm, friends.