I don’t know about anyone else, but the middle of April always feels kind of bland.  Nothing really special seems to be going on, and we’re in that almost but not quite spring part of the year, so I thought I’d change things up again for this week and have a theme.  This week, we’re looking at events that have to do with sustainability and protecting the environment.  That may sound boring, but I think you’ll find at least one of these events interesting.

Starting with Tuesday the 18th, the Boulder Theater is presenting the Recycled Runway for the 8th year in a row.  Hosted by The CommonThreads Creative Lab in Boulder, this fashion show allows local middle and high school students to design and show off original fashion designs made from either found or recycled materials.  These students pull whatever they can find, literally, and put them together into amazing articles of clothing that are completely unique.  Seeing what these students can put together with the materials on hand often puts professional designers to shame.

Also on Tuesday, April 18th, a poster making party and informational event will be held for the upcoming People’s Climate March.  The march itself isn’t until the 29th, but this event is all about creating posters and works of art to aid in promoting the message of a sustainable climate.  A short training about the march and how to act appropriately in a strictly non-violent movement will begin at 6 before starting to create posters and other pieces.  Some supplies will be provided, but everyone is encouraged to bring as much as they can for themselves and to share.

If you don’t feel quite up to being so direct as marching for the planet, how about going to a talk?  The very next day, April 19th, the Boulder Earth Week is presenting Justin Bogardus to speak about how conservation needs a marketing overhaul.  This talk is filled with comedy, but also carries a salient message.  Bogardus seeks to cultivate new ways to think about protecting and repairing the planet by giving a new perspective on how we look at nature.  This two hour event, starting at 7pm, is by donation so you can pay whatever you feel is fair. 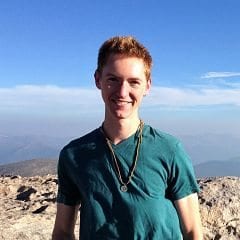 Jesse Lennox
Jesse graduated from CU Boulder in 2014 with an English degree in Creative Writing. He has been writing independently ever since a high school teacher inspired him with a simple assignment to write whatever he wanted after struggling to follow a writing prompt. Since then, Jesse has been writing every day and continues to work on getting his writing published. It was that one spark that sent Jesse on a path not just toward pursuing his own writing, but to go into education in the hopes of awakening a similar passion in others. To keep his creative juices flowing, and keep a healthy balance, he also enjoys exercise of almost every kind and keeping a healthy diet. In his free time he enjoys seeking out new and interesting stories of all kinds, watching foreign media, and sometimes just relaxing and looking out the window for a while. Since coming to Boulder at the age of 3, Jesse has found no shortage of inspiration here.
See More Articles From Jesse Lennox
Tagged: About Boulderartboulder eventscommunityConservationearthenvironmentInspirationMotivationrecyclestudents
Boulder Colorado Air Quality