Faces of Boulder – Eric: “His teachers suggested practicing on the infamous Pearl Street” 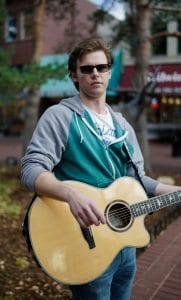 Have you seen Eric around before? No, you haven’t because last Monday was the first time Eric had ever been to Boulder. Eric comes from a small town in Colorado and currently lives in Denver but he decided to come up and visit a friend in Boulder. The first thing that he did? Come to pearl street and play his heart out. Eric is taking some classes on preforming and one of his teachers suggested practicing on the infamous Pearl Street. So, instead of running the chance of bothering his friend by playing in his apartment, he stands in front of a modest crowd and belts to his hearts content. I doubt that you’ll catch Eric anytime soon, but I guarantee that you’ll meet people doing the same thing he’s doing; practicing on the mean streets of Pearl!