Home › Blog › Parks › Fire in the Frontrange: What you need to know

Fire in the Frontrange: What you need to know

The importance to control the potential dangers of fire is paramount for protecting the homes and properties in and near the Front Range. The local forests have been increasing in fuel load and fire severity. With the threat of fire an ever-pressing issue the community’s mind, it is important for locals to understand what is going on with forests across the region. Coloradoforestrestoration.org (CFRI) has a science research with recommendations for how to approach the persistent fire hazard that we face in Colorado.

Fire is a natural part of our ecosystem’s development. G. David and E. Wohl have written an online article on fire in the Front Range and according to them fire is a natural part of our ecosystem. “Forest fires are essential for the renewal and growth of forest ecosystems. Fires aid in the renewal of the forest by exposing the mineral soil, increasing the amount of light and moisture, and releasing plant nutrients”. The properties of each fire can be attributed to the climate, vegetation type, and history of disturbance of that section of forest. Fire severity generally increases with elevation while the frequency decreases with elevation (G. David).

Humans have been primarily increasing the amount of wood that can burn in the forests (also called the fuel load) through fire suppression and the introduction of mountain pine beetles that originated from Japan. Fire suppression has been going on in our community since 1900. Instead of letting the parts of the forest that were naturally going to burn, society has been putting the fires out for the past century. This leftover fuel load has been slowly building up, increasing the threat from future fire and wildfire. As someone who lives in Colorado, it is almost impossible to not notice the damage that is being done to local forests by pine beetles. 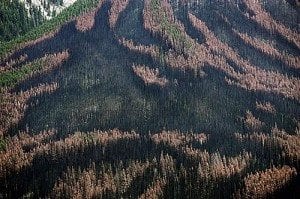 The beetles have made fire more of a concern because the dead trees from pine beetles that are significantly strewn across the Rocky Mountains acted as fuel for the fire that tore across the Front Range two years ago, increasing its intensity and making the fires more difficult to put out. After high severity fires, eighty to ninety-five percent of the surface is either bare mineral soil or bare soil covered in ash. These areas can often when not given help become barren. If an area burns too many summers consecutively it is also possible for the seed bank to burn, further preventing any life from returning.

According to the Denver post, over 32,000 people were displaced in Colorado Springs during the fires of two years ago. During this same time, a wildfire in the mountains west of the city of Boulder grew to about two hundred and thirty acres, consuming Boulder in hazardous smoke. While only twenty-six homes were evacuated, more than two thousand south Boulder homes were told to be alert and expect evacuation. 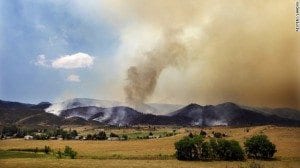 Two years ago was a scary wake up for the citizens of the Front Range. “We cannot prevent all high-severity fires in Front Range ponderosa pine forests, and the likely effectiveness of mitigation will vary with elevation, and with other factors including extent of treatment, topography, weather, and climate”. (CFRI) While we might not be able to prevent all the aftermath of a century of suppression with pine beetle killed trees added on top of it, in order to prevent further excessive damage it will be important to take steps to remove the increased fuel load and to further prevent forest fire without increasing the fuel load.

Other than flash floods, wildfire is the only other environmental disaster that is a threat to our community. In order to successfully remediate these issues of forest fire people must be made aware of how they might be contributing to fire, but they must also be made aware that the fuel load can be manually removed in a proper method that prevents excessive damages from fire without damaging the environment. “The two goals of community fire protection and restoring historical ecological conditions can sometimes, but not always, be attained in the same locations”. (CFRI) While Boulder Tree Service offers to remove trees as a service, there is no current community volunteer group that removes the fuel load from our forests. It is not recommended to do this without being properly educated, because if too much material is removed the topsoil wears off, damaging and exposing the soil underneath. During the elections this year there was multiple questions on the ballot that were pushing for increased fire protection. If we are to support increase fire protection, it must be done in an appropriate fashion and aimed at reducing fuel load, not just controlling and putting out fire.