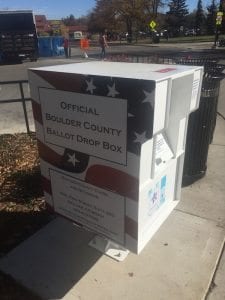 People, I cannot stress enough to you how important it is to vote for our next president. Though the two leading candidates have been causing a lot of controversy, confusion, and doubt for our country thus far, abstaining from voting is NOT the answer. Those who are not voting think that it doesn’t matter because they don’t care who wins the election, therefore their vote won’t make a difference. Your vote will absolutely make a difference, please believe that. Voting is not only a right but it is a privilege…a privilege people! We have to wait eighteen years before we are granted this privilege, and to me, that’s a long time. If I have the ability to contribute to something bigger than myself, that will effect my way of life, you bet your ass I am going to do so. I’m not going to rant about who I am voting for because I think it’s important for everyone to have their own political view, but I am 100% going to vote. Actually, I already have voted and it’s a great feeling let me tell you. We have until November 8th to vote, that’s about another week and a half so there is still time to become as educated as possible on the platforms and stances of both candidates.

This presidential election is going to make history. We have a chance to elect the first women president of our nation, or a bimbo billionaire who thinks he is God’s gift to the Earth. Like every candidate, both have pro’s and con’s, but one of the two has way more con’s…just saying. Those of you who aren’t voting, why wouldn’t you want to be apart of something of such importance? There are a lot of things at stake for our country due to this election, certain freedoms that would be difficult to give up. It just seems silly that a vote is wasted by someone who doesn’t care about the outcome of their country, especially an outcome that will eventually effect their livelihood. Countless celebrities have made videos urging people to vote, there are continuous campaign adds on TV, and there are a lot of people on CU’s campus (and around Boulder) who have been asking students as they walk by if they are registered to vote/have voted yet. Do the right thing, be progressive instead of passive and VOTE!

Lily Lemire
Lily is a senior at the University of Colorado at Boulder and will be graduating with a Bachelor of Arts in Film Studies along with a certificate in Business. She is originally from Scarborough, Maine, but decided to venture to Colorado for it's beauty and to get back in touch with her birth place which is Boulder. She is a Film Studies major because she is very interested in the behind the scenes of what goes into making a film. Not only that, but her favourite hobby in the world is to watch movies. She recently went abroad to Sydney, Australia to get a taste of a different culture. While being there, she learned to not take life too seriously, and to slow things down. The Australian lifestyle can really teach a person how to be chill. You can find Lily at the movies, hanging on Pearl Street having a beer with friends, or at the breathtaking lookout of Flagstaff enjoying the view.
See More Articles From Lily Lemire
Tagged: CUImportantNovember8thPleaseDoItvote